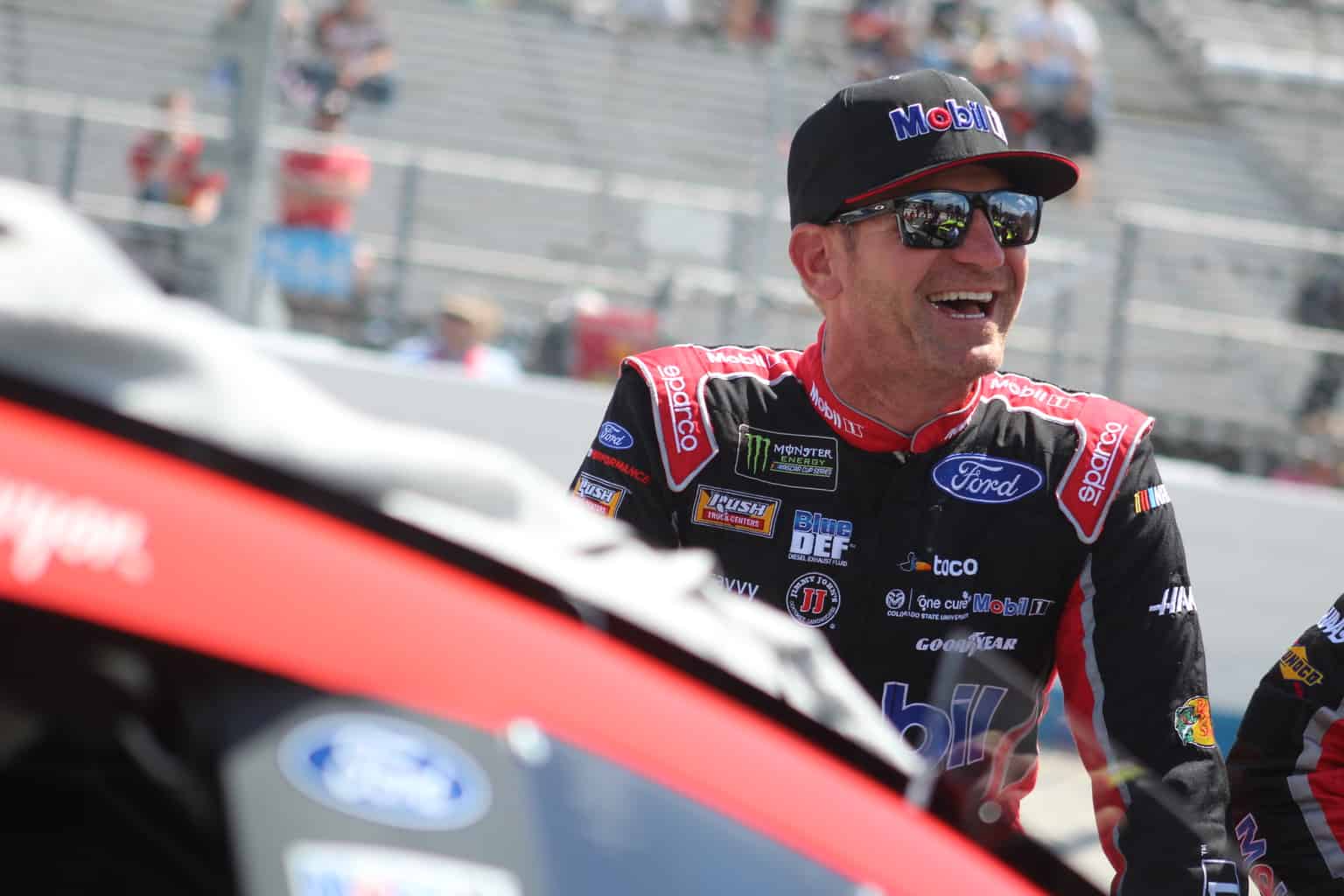 "That was dumb on [Erik Jones'] part … I shoulda just wrecked him, I guess."- Clint Bowyer pic.twitter.com/6mWEPDSbVB

Meanwhile, Jones shrugged off the move and said it was “just racing.” So who was right regarding this racing etiquette? Mark Kristl and Clayton Caldwell debate.

Jones was fine in blocking Bowyer. And Bowyer overreacted.

It was the last lap of the Digital Ally 400. The white flag signifies the money lap — the one that determines the points and money.

Jones blocked, and, most likely if he was in the same position, I assert Bowyer would’ve done the same thing. Jones was faster than Bowyer all race, and he guesstimated he could successfully block.

It was overtime, so the field was bunched up. Jones arguably had the third fastest car in the race, and on the final restart, Bowyer was the closest he’d been to the top three drivers. He wanted the win or, at minimum, a podium finish. His No. 14 Stewart-Haas Racing Ford was fast, but it still lacked the speed for a podium finish.

So when Jones blocked Bowyer, Bowyer was pissed. In his mind, Jones unnecessarily blocked him. Bowyer wanted to luck into a better finishing position than the caliber of his No. 14 Ford. If not for that final caution, Jones drives away from Bowyer, and there are no complaints.

Neither Bowyer or Jones have a win this season. Bowyer is ninth in the point standings, whereas Jones is in 14th. Both drivers want a playoff berth, and points are a valuable commodity. So both drivers are pushing their respective cars to the limit.

I wonder if the pressure at SHR to win a race fueled Bowyers’ frustrations. Last year, the team was arguably the best team in the Cup Series. This year, the field has caught up to them, and they have not won a race yet. Bowyer saw the leader, and he wanted a shot, even though both Alex Bowman and Brad Keselowski clearly were better than him.

Jones saw the leaders too. He has not enjoyed contending speed at several races this season, yet at Kansas, Jones had a race-winning No. 20 Joe Gibbs Racing Toyota. On the final restart, there was a hole, and although the block was risky, it was the last lap of the race — go for broke! That was Jones’ last shot to gain positions. If it were lap 50 of the race, perhaps it should be more frowned upon.

Jones blocked Bowyer, there was no contact and Jones finished in third place. Despite Bowyer’s anger, he finished in fifth place. Did Bowyer forget he finished better than 35 drivers? Instead of being content with the caliber of his No. 14 Ford, Bowyer complained. He seemingly was the only one. Jones didn’t even acknowledge him in his post-race tweet.

P3 for our @DEWALTtough team tonight. It was really up and down, but at the end of the day we had a good enough #Camry to win. Just weren’t able to get to the right spot. We ran out of time and ran out of getting the right runs and the right positions. Good day overall. pic.twitter.com/IMmplgMMC7

In the Gander Outdoors Truck Series race at Talladega last season, Noah Gragson blocked too late, and he wrecked. Blocking is a calculated move.

Jones did the right thing at Kansas. He blocked for a position, a podium-finishing position to boot, on the last lap, and he successfully blocked Bowyer. That’s just hard racing. –Mark Kristl

Blocking is Not Racing

The situation between Bowyer and Jones certainly got heated on Saturday night at Kansas, and while I respect Jones as a driver, I can’t help but agree with Bowyer.

Blocking is not racing, no matter what the situation. The new rules package for 2019 has changed the game, and it has made blocking more acceptable in a lot of fans eyes because it’s really the only defense.

If you look at the Jones/Bowyer situation, it wasn’t just some driver doing everything possible to not let another driver get by. We’ve seen that in the past with Ryan Newman, who is labeled by many as the toughest driver to pass in NASCAR.

However, Newman doesn’t really block. He does it the right way. Blocking in stock car racing used to mean a visit to the wall because someone would wreck you. Over the years, several drivers have been vocal about blocking, including Tony Stewart, one of the biggest old-school racers NASCAR had.

It’s also different to block someone from a lane over than to move across the entire track as Jones did. Jones went from the upper groove down to block Bowyer, then proceeded to move up to block him again. Hold your line — that’s what stock car racing is all about.

I am all for a driver doing what they have to do to put themselves in a better situation. You want to block? Go ahead. You want to wreck a driver? Go ahead. But then you can’t complain when something like this happens to you.

Bowyer should now have a get-out-of-jail-free card when it comes to Jones, and Jones can’t complain. Drivers should police themselves when it comes to blocking, which is why I don’t have an issue with the disagreement at the end of the race.

Blocking someone the way Jones did is a dangerous move. I understand that spotters are a major part of the sport nowadays, and it makes racing a lot safer. However, with the closing rates this package provides, making a move like that could have caused a major accident and would have affected drivers and teams who were nowhere near the on-track battle.

At the end of the day, I understand why Bowyer was so upset. It’s not a coincidence that during the broadcast you saw Joe Gibbs giving Jones a lecture. Jones looked like a little boy listening to his father after he just made a mistake. Sometimes you have to use your head and drive a little smarter.

In the end, blocking is not racing. It’s as simple as that.  – Clayton Caldwell

Personally, I think you both missed the mark on the situation discussed.
The actual answer is your both correct as Jones’s block when he came down into the first turn was only a partial block as he was fairly well ahead and was going into the corner.
It was the 2 and a half lane move back up the track to block that likely had Bowyer pissed off. I doubt Bowyer was upset about “block” one,. That is part of racing. It’s that second one that would fall under the be weary about your situation because it was blatant and dangerous.
I think the one-sided conversation with Coach Gibbs was more about handling the aftermath with the right attitude moreso than Jones’s actions on track.

Neither here nor there to me, but if it would have been Kyle Busch behind Jones good bet Jones would have been turned if not during the race then afterward on the cool down lap.Teammate or not.

They were both right. Jones for racing hard making a risky move to save position in the closing lap, and Boyer for being mad about having to make a split decision to back off and lose spots or turn a guy in the front of the field.

Just one of them racin’ deals where adrenaline is high and decisions are made in less than a second.