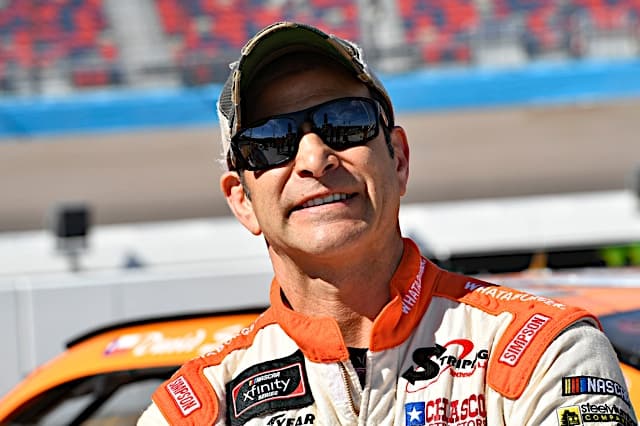 In present-day NASCAR, it’s rare for a driver to move up the proverbial national touring series ladder late in their career. However, that’s exactly what David Starr has done over the past five seasons.

Starr, 51, primarily drove in the Gander Outdoors Truck Series between 1998 and 2013, running 27 Xfinity races along the way. In 2011, the Texas native made his Monster Energy NASCAR Cup Series debut for Leavine Family Racing, competing in four races. During that time, Starr won a quartet of Truck races, with a best championship finish of fourth in 2006 — the same year Todd Bodine won his first title.

In 2014 Starr, then age 46, ran 14 Xfinity races, splitting time between TriStar Motorsports and SS-Green Light Racing. In 2015, the veteran driver competed in his first full Xfinity season, finishing 16th in points and placing a season-best sixth in the opening race of the year at Daytona International Speedway.

Starr spent 2015 and the opening seven races of 2016 with TriStar before returning to the track at Daytona in July — running 16 of the final 19 races with RSS Racing. In 2017, he jumped ship to BJ McLeod Motorsports, where he picked up his career-high Xfinity finish of fifth at Daytona.

Beginning in 2018, Starr took his skills to Jimmy Means Racing, a team that has roughly five employees working on their No. 52 car. In 43 races with the team, he has a best finish of 14th coming at Talladega Superspeedway three weeks ago.

But why did Starr make the transition to Xfinity so late in his career?

“I always said you don’t deserve the opportunity to be at this level if you hadn’t won at the level underneath it,” Starr told Frontstretch. “I was chasing a championship, got close four or five times, and then I was chasing something that required millions and millions of dollars that I didn’t have.

“Then I realized, I’m not getting any younger and I’m chasing something that I’m probably not going to achieve, because the sponsorship I had didn’t get me to one of the teams that was capable of winning a championship and winning races. It was time to ask myself what I wanted to do. I wanted to race in the Xfinity Series, so here I came.”

Since beginning his first full Xfinity season in 2015, Starr has one top five and a trio of top-10 finishes. His other lone top 10 came in 2014 while running a partial season with TriStar when he finished ninth at Talladega Superspeedway.

For Starr, he didn’t care where he raced — whether it was making it a mainstay in Trucks or running a partial Cup schedule, he just wanted to race.

“I want to compete. I’m a winner,” Starr added. “When people ask me, ‘why do you still race, David? You don’t have a shot at winning.’ I still like the competition side of it. I want to compete and try to beat people that might have better cars, better engines, more people, more money. If I can beat them, I like that challenge. I like competition. It seems like the older I get, the more energy I get.”

Starr mentioned that the transition late in his career wasn’t as difficult as it may have seemed. At the time he joined TriStar, it was an established Xfinity team with four full seasons under its belt. Hell, the team ran five full-time cars in 2015.

“You just try to find a team that’s capable of running well,” Star said of the transition. “I always used to say in the Truck Series, if you look at my record, I’ve got tons of top 10s and top fives, and if you can run in the top 10, top five every week, your wins will come. We’re not there today. We’re not equal today. I still love the competition.

“As I get older, the fire and burning desire to win is still there. I think it burns hotter today. I smile a lot, but inside I’m madder than hell. I want to cuss, I get mad. I have to get away from all the people and then I’ll express my emotions.”

Starr believes Talladega is the perfect example. The No. 52 car finished 14th, but he believes the car should have taken the checkered flag inside the top five.

Of drivers that have started all 10 Xfinity races so far this season, Starr is the second oldest driver (Jeff Green, 57). The difference is Green is primarily a start-and-park driver, while Starr has four top-20 finishes.

“I don’t look at retirement,” Starr stated. “It never crosses my mind. That burning desire to race, race, race and try to win and try to accomplish something is hotter than it’s ever been in my career, and I’ve been doing this for 22 years.”

As 2019 continues, Starr hopes to keep the top 20s coming for Jimmy Means Racing. Compared to last year, the No. 52 team has bettered its average starting position by two spots and average finishing position by nearly four.

“We overachieve when we finish in the top 20,” Starr said. “I think if we can be a top 20 team every week, that’s what we’re striving towards. We’re not there yet. When we do finish in the top 20, it’s almost like a win for us because we’re not one of the big powerhouse teams. We work on limited funds.”

One of the things Starr appreciates about team owner Jimmy Means, who’s been around the sport for over 40 years, is how the team owner can stretch a dollar. When you’re balancing a tight budget, every penny counts.

It’s a work in progress, but Starr thinks the No. 52 crew continues to get better.

“If we can just finish in the top 20 or close to 20th position, as long as everybody does their job and we leave the racetrack and did the best we could, then that’s all we had that day,” Starr mentioned.

The series’ next race is at Charlotte Motor Speedway where Starr has a best outing of 20th (twice, including last year) in 10 starts.