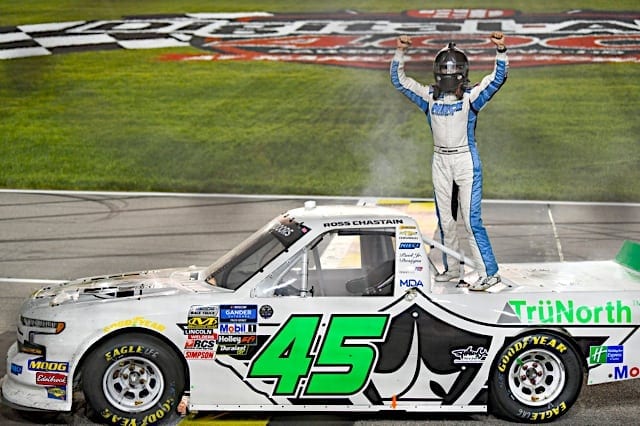 In this week’s edition of the Frontstretch Podcast, Dustin Albino and Mike Neff discuss an entertaining weekend of racing at Kansas Speedway that saw Brad Keselowski victorious at the Monster Energy NASCAR Cup Series level, taking the win from Alex Bowman late.

Bowman became the first driver in NASCAR history to have three consecutive runner-up finishes without a win. But clearly, Hendrick Motorsports has turned the corner, as the organization put three cars inside the top six.

The battle of Erik Jones vs. Clint Bowyer was a major talking point post-race, as Jones threw a block on Bowyer coming to the white flag. Neff sounds off, mentioning the veteran driver needs to “get his panties out of a wad.”

We discuss the strong finishes for Chris Buescher, who finished in the top 10 in all three stages for the first time in his career, as well as reigning NASCAR Xfinity Series regular Tyler Reddick outrunning his two Richard Childress Racing teammates in just his second Cup start.

Then, the podcast takes a more serious turn, talking about mental health. Bubba Wallace mentioned at Kansas how it’s been rough for a while at Richard Petty Motorsports. We discuss how important mental health is to everyday life, while claiming why we believe Wallace shouldn’t have a problem getting sponsorship in order to get better equipment.

Finally, Kansas Gander Outdoors Truck Series winner Ross Chastain calls into the show to discuss his first Truck Series victory, edging out Stewart Friesen, who ran out of fuel. Chastain also talks about some of the hardships he faced last offseason.