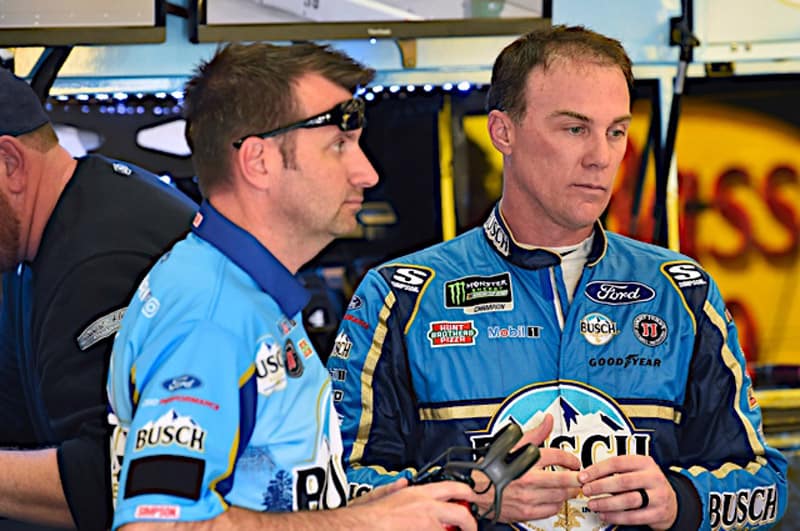 Kevin Harvick won 14 races over the last three seasons going into this year. He may have won another five or six if his pit crew had not let him down.

Last weekend at Kansas Speedway, Harvick found yet another way to grab defeat from the jaws of victory when after leading 104 of the first 178 laps, he came in for an emergency pit stop during a green flag run because he feared a loose wheel. Who could blame him considering how often his pit crew has found ways to cost him races? But this time it was just junk on the grill that made the car handle in evil ways and cost him another win in a race he had dominated.

Whenever the month of May arrives, I start packing a bag for the Indianapolis 500 and also get ready to squash the inevitable “We Need to Move the All-Star Race” arguments from fans and media members alike. Please remember we attempted to move the All-Star Race once back in the day and, while it gave us a great race, it was also lightly attended.

The All-Star Race was the brainchild of T. Wayne Robertson, a marketing genius at Winston back in the day. It was made even more famous through the promotional theatrics of Humpy Wheeler and really took off when lights were added to Charlotte Motor Speedway. This was an excellent way for the drivers and teams of NASCAR to race for some big money while promoting the Winston brand and the upcoming World 600 at Charlotte on Memorial Day Weekend.

Some have said the All-Star Race has become stale and moving it to other venues will make it exciting again. Moving this race would put an extra burden on the teams and drivers to travel to one more out-of-town event. Why not give them all one more home race during the year? I have news for you: the racing at all NASCAR intermediate tracks has become stale due to the rules package in the sport. The infamous “Pass in the Grass that wasn’t a Pass” wouldn’t be possible nowadays because the front splitter would tear the front of the car off.

Instead of moving the event, just bring back Humpy Wheeler for one race a year so we can once again have fun at the All-Star Race!

It is rare in the NASCAR business to find a team owner that combined greatness in so many ways.

When someone passes away, you always hear such great stories about the person and wonder if they could possibly live up to all of those accolades. Mike Mittler is one who did.

Mr. Mittler was exactly the kind of team owner the NASCAR Gander Outdoors Truck Series needed and also the type of owner they made extinct over the years. A brilliant mind in business, he also was the kindest man you could ever hope to meet in the garage area.

Our paths crossed when I was looking for a NASCAR ride for one of my young PR clients. After Mr. Mittler asked me what I did, it led to me inviting him for an interview on a podcast I do about the business side of motorsports. Once you interacted with Mr. Mittler, you were part of his extended family for life.

At a time when so many NASCAR owners are looking for top dollar every week for their rides, Mr. Mittler’s team provided great value and guidance to many young racers trying to make it to the top. We need more Mike Mittlers in NASCAR and in our lives.

Farewell Mr. Mittler. You have made a huge impact on this sport and on this world.

Throw away the usual statistics this week because the All-Star Race is a sprint, not a marathon like next week’s Coca-Cola 600. Under the lights with no points on the line, we see much different behavior from NASCAR drivers.

Only one active driver in the field, Jimmie Johnson, has more than two wins in the All-Star Race, but his last of four wins came in 2013. Harvick has won twice and is the defending champion of the race. But my pick to win this weekend finally earned his way in by winning races instead of fan votes. In only 3 All-Star appearances, Chase Elliott has the best average finishing position among active drivers of sixth despite starting all three races towards the back of the pack. Give him a chance to qualify up front this week and he could dominate the show.

Win: Elliott-Finally gets a good starting spot and has finished top 10 in all three previous races

Place: Harvick-Had the strongest car last week until he picked up junk on the front

Show: Brad Keselowski-Coming off a strong win on an intermediate track

Long Shot: Johnson (20-to-1 Odds) This losing streak is wearing on seven-time

Interesting, Kevin hasn’t won one yet. Must be NASCAR officials (one) finally did their job towards the end of last season and PRAISE THE LORD noticed the cheating that was going on for some time. Maybe that is why he has not won a race so far in 2019? Hmmmm

Right you are. Not so easy under the microscopic scrutiny of Nascar inspection. Play fair Kevin and Rodney!

I found this article at https://www.jayski.com/. Glory! He’s back!!