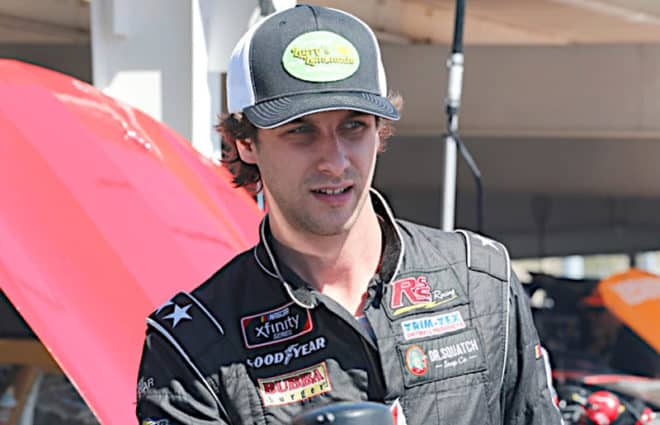 Josh Bilicki made his 51st career NASCAR start at Kansas Speedway last Friday night (May 10), and that race also happened to be his Gander Outdoors Truck Series debut. Piloting the No. 34 Chevrolet for Reaume Brothers Racing, the 23-year-old quietly debuted in a field that ended up being the first short one since before the beginning of the 2018 season.

Prior to making his debut at Kansas, Bilicki spoke with Frontstretch about making his first career start, how his NASCAR career began and more.

Rick Lunkenheimer, Frontstretch: What brought the Truck deal together?

Josh Bilicki: I completely skipped the Truck Series and went straight to the [NASCAR] Xfinity Series. This year, my crew chief at RSS Racing is Josh Reaume, and he owns the two trucks, the (Nos.) 34 and 33. Last week, he had the idea of putting Ryan (Sieg) in the 33 truck, and I tossed the idea around and said, ‘If you ever need a driver, let me know.’ We put together a little bit of sponsorship and made this work.

It’s something that I’ve been wanting to do and I think it’s really cool now I can say I’ve run all three national series.

Lunkenheimer: Does Kansas hold any special significance for you?

Lunkenheimer: What’s the biggest difference you’ve noticed between the Xfinity cars and the Trucks?

Bilicki: Right now at the current state, I think Xfinity cars are the hardest to drive at a mile-and-a-half. They have less downforce, almost the most horsepower. It’s more in the drivers’ hands. My second lap out there in the truck, I was wide open. There’s a lot more downforce in the trucks and the [Monster Energy NASCAR] Cup [Series] cars too.

When you’re in a pack, obviously, it starts to get more challenging, but I still think the Xfinity cars are going to be the toughest to drive this year, and a lot of other drivers agree with me.

Lunkenheimer: What do you think about Cup drivers dropping down to the lower series, ie. Kyle Busch?

Lunkenheimer: What kind of challenges do you see being a back half of the garage driver that doesn’t tend to get the media attention the bigger teams get?

Drivers like myself work really hard to bring sponsors to the sport, and it’s tough when they don’t see themselves on TV. Almost every session is televised now — with the new streaming, maybe not as much. Going back to single-car qualifying really helps me because you’re basically guaranteed TV time unless you get a TV commercial, which I think I’ve gotten the last couple of weeks. That’s definitely the toughest part of being a smaller team.

Even now, driving for RSS, Ryan Sieg has a lot of success this year. Being his teammate, we’re close with Michael Waltrip and guys like that who are out there announcing who can bring a great amount to our sport.

For instance, Dr. Squatch, my sponsor in Daytona, they got television coverage, and Michael Waltrip kept saying very positive things about myself and the sponsor, too, in practice. There’s a lot of things like that that go a long way.

Lunkenheimer: As a child, what did you envision for your racing career?

Bilicki: Growing up on road courses and even racing sports cars, SCCA, lower budget sports cars, I never really had the intention of racing NASCAR. I thought it was kind of out of my reach. I was growing up playing Playstation, all the NASCAR Heat video games. You see those guys as race car drivers, but you also see them as celebrities.

Growing up, I never thought that I would get to that point, and then when I had the opportunity to race at Road America, that really opened up a whole new world for me. I ran some ovals, too, and my first oval start was in the Xfinity Series.

I’ve definitely done more than I think I would have imagined when I was young.

Lunkenheimer: How far do you see yourself going with NASCAR before moving to something else?

Lunkenheimer: You mentioned the RSS Racing deal. How did you end up with the team?

Bilicki: I had sourced a sponsor for Daytona [International Speedway]. I was talking to a couple of other teams, and nothing ever materialized. I ended up going on Twitter and messaging Ryan Sieg Racing. We knew each other, but we weren’t very close. I said, ‘I have a sponsor for Daytona if you’re looking for one for one of your cars,’ because I heard that JJ Yeley had moved on.

It was just a shot in the dark. They came back and said you’re in the car at Daytona. This was going to be a good start to the year. I had no intention of running the full season for them after that.

They said, ‘What do you have for sponsorship after that?’ I had nothing confirmed, but I have a lot of little things here and there. They said, ‘Why don’t you come race for us the full season? When you have sponsorship, you’ll run the whole race; when you don’t, you know what you’ve gotta do.’

It’s worked out really well. Out of the 12 races this year, we’ve run like five of them. We have good speed, good cars. I’m enjoying this year more than I did last year running every single race just because we’re in more competitive cars. I’ve learned a lot.

Lunkenheimer: What’s something you wish fans knew about your racing career?

Bilicki: A lot of people know I find all of my own sponsorship, how I started out. I think the biggest thing would be my first NASCAR start was with Obaika Racing, which came about the week of the race. We raced Saturday at Road America. I went on Facebook on Monday and messaged Obaika Racing and said I was available to drive because they had two to be announced cars.

Another shot in the dark. I’ve emailed team owners, I’ve called team owners, nothing. So I figured what’s it gonna hurt? They came back on Facebook and said they were interested. So I called Victor Obaika, didn’t know much about the team, about the sport. I think Wednesday night, Victor finally said, ‘You’re in the car.’

Thursday, I went up to Road America, which is only about an hour from my house. But I was so excited, I got a hotel and Friday, I was in the car. I think that’s pretty wild that it happened just like that.

The race at Kansas went about as well as could be expected for Bilicki and his Reaume Brothers Racing team. After starting 25th, the driver of the No. 34 posted a respectable 18th-place finish, something that’s a step in the right direction for a team that runs on such a limited budget.

Solid 18th place finish last night in the @RBR_Teams #34 Silverado. We fought through a bit of adversity throughout the night but we kept our heads down and worked on the car every pit stop. Mega thanks to everyone on the team for their hard work! Can’t wait to do it again. pic.twitter.com/7HaoMA9GgF

Rick starts his fourth year with the Frontstretch in 2014, working as a photographer for selected NASCAR races around the country. An avid Transformers collector and music lover, Rick spends his time away from racing furthering his knowledge in both fields. He resides in Texas and is married to Frontstretch Managing Editor Beth Lunkenheimer.
Previous Josef Newgarden Paces Second Practice at Indy; Fernando Alonso and Felix Rosenqvist Involved in Crashes
Next Frontstretch Podcast: Ross Chastain Talks Trucks Win, Brad Keselowski Steals Victory In Cup 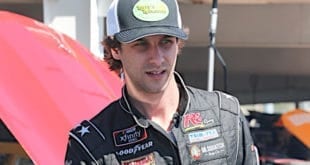