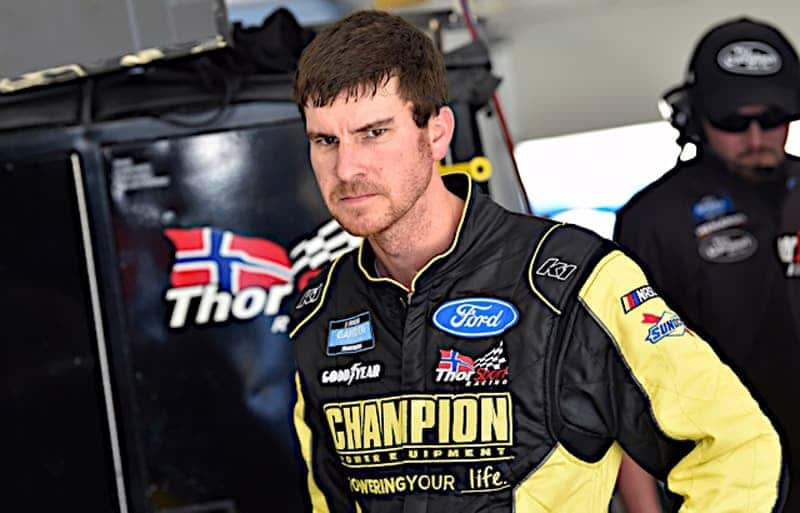 Eight races into the NASCAR Gander Outdoors Truck Series season, the driver at the top of the standings might be a bit surprising.

Grant Enfinger hasn’t won this year, and he’s only led a double digit amount of laps in one race. Yet he leads the points by 15 markers over Stewart Friesen. The key to Enfinger’s strong start has been consistency — his worst finish so far is 11th at Las Vegas Motor Speedway.

His smooth season continued at Charlotte Motor Speedway on Friday night (May 17), where Enfinger had a quiet night. He started ninth and finished both stages in third before settling for ninth place at the checkered flag. It wasn’t flashy, but he increased his points lead by two points as a result.

“[Tonight] was kind of the same thing,” Enfinger told Frontstretch after the race. “We started this morning terrible, couldn’t even drive it — out to lunch, honestly. But [crew chief] Jeff Hensley… all these guys on this ThorSport Racing F150 never gave up. We came back that second practice session and we were pretty decent, we showed that all night long.

“I had something I could drive all night long. I could contend for second place, I feel like, if the stars had lined up. I don’t think we would have ever had anything for the [No.] 51 [Kyle Busch].

Busch went on to win the North Carolina Education Lottery 200 at Charlotte in dominant fashion, leading 102 of 134 laps.

Enfinger can nickel and dime his way into the playoffs and a regular season title, but if he doesn’t win any more stages or any races, then he would start the postseason with 16 playoff points.

Enfinger’s ThorSport teammate Johnny Sauter, by comparison, already has seven playoff points and will likely earn more through winning more races, stages and his points position in the regular season.

The lack of playoff points would likely put Enfinger at a disadvantage. Fortunately for Enfinger, Friday night was the last race Busch can drive in 2019, which could open the door for Enfinger to finally get to Victory Lane in 2019.