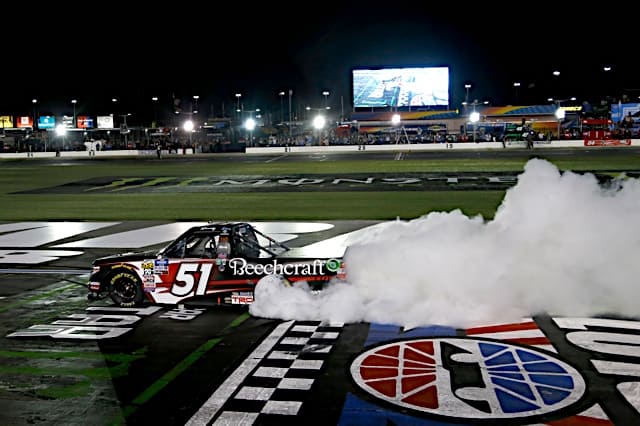 “[I] wish I could do more,” Busch said after emerging from his truck in Victory Lane. “Just can’t say enough about everybody at Kyle Busch Motorsports, everybody at Rowdy Manufacturing. This Cessna Tundra was awesome tonight; it was flying, it was fast.”

The Monster Energy NASCAR Cup Series star won the North Carolina Education Lottery 200 at Charlotte Motor Speedway on Friday night (May 17) in dominant fashion. Veteran Cup drivers are only allowed to enter five Truck races per year, so the race was Busch’s last of 2019.

The win was the 56th of Busch’s Truck career.

On a restart with three laps to go, Busch got a big push from Brennan Poole and held off a hard charge from Ben Rhodes to hang on for the win. In just those three laps, Busch upped the margin of victory to 1.115 seconds.

Poole finished second — his career-best NGOTS finish just one week after his team skipped a race due to lack of funding. Stewart Friesen finished third, while Rhodes fell back to fourth and Matt Crafton was fifth.

Austin Hill, Todd Gilliland and Anthony Alfredo took positions six through eight, with Alfredo scoring his first-career top 10. Grant Enfinger and Ross Chastain rounded out the top 10, continuing Chastain’s streak of a top 10 in all eight races this season.

Busch started the race in eighth and followed his Kyle Busch Motorsports truck Gilliland to the front before taking the lead away from the No. 4. Busch quickly gapped the field but gave up the stage one win when he pitted under caution with five laps to go in the stage. Crafton took advantage of the opportunity and passed Gilliland to win the stage.

Busch picked up where he left off at the start of stage two and quickly took the lead from Chastain. Busch looked to sail off into the sunset when another curveball was thrown his way.

A caution came out on lap 79, where all but nine of the lead lap trucks pitted — Busch was one of the trucks to stay out. He continued to lead, but the caution came out again just a few laps later. Busch and the other pitted this time, forfeiting valuable track position.

Busch restarted in eighth, but his truck was too good to stay down. He quickly moved up to third as the leaders battled three-wide, then he pounced after Rhodes and Johnny Sauter settled their fight for the lead.

Busch took the lead with 39 laps to go and never really looked back, despite the late-race charge from Rhodes and Poole.

Enfinger continues to lead the Truck points, upping his lead to 15 markers over Friesen.

Up next for the Truck Series is a standalone event at Texas Motor Speedway on Friday, June 7.

There’s a third grade Big Wheel race up here this weekend. Maybe Kyle could come up and enter that too. What a jerk.

Time to ban Cup drivers from the lower series. Kyle is a spoiled child.

Tuned in with 40 something laps remaining; saw Busch leading; turned to baseball game. How can NA$CAR expect young drivers make the money they need to grow their teams with the Gibbs/Busch greed taking the purse?

What a headline!!! Kyle dominates in the kiddie pool again. Once Busch took the lead, I changed the channel and never looked back.

If Cup drivers enter the event their purse winnings are cut in half and distributed to the regulars.

Instead of Rowdy I’m thinking more like Jughead, not Rowdy Yates (sorry Clint).

Just more playoff points going into a hole instead of a series regular who needs them.