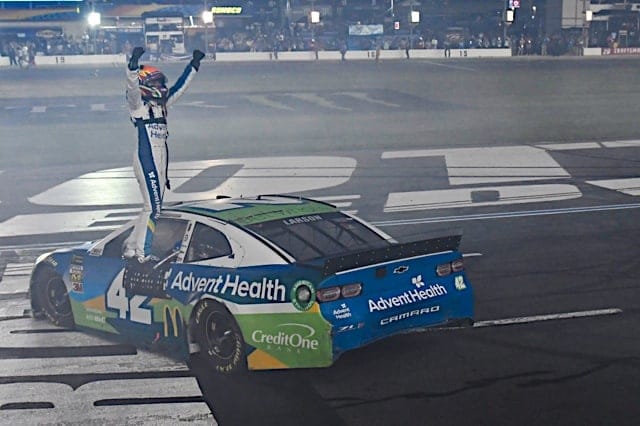 There was hard racing, bent fenders, hurt feelings and a celebration in the Monster Energy All-Star Race. When the checkered flag flew, Kyle Larson drove his No. 42 Chip Ganassi Racing Chevrolet into Victory Lane, earning $1 million.

Larson became the fourth driver in NASCAR history to win the All-Star Race after transferring in from the Open.

“This whole day was up and down, from the Open we were in, to getting a little bit of damage and having to repair the car,” Larson said after the race. “…I’ve been close a couple times. I feel like every time I’ve been in the All-Star Race, I’ve been close to winning. It’s neat to finally close it out.”

Kyle Busch won the first stage. He bested Kevin Harvick and Clint Bowyer, as the stage went into overtime because of Erik Jones‘ flat tire after he slapped the wall.

Harvick won the second stage. The only incident in the stage came when Ryan Newman made contact with Bubba Wallace. Newman went for a ride through the synthetic turf at Charlotte Motor Speedway, not suffering any additional damage.

There was a series of unfortunate events with 17 laps to go in the third stage. Harvick felt like he had a loose wheel. As he slowed his No. 4 Stewart-Haas Racing Ford down, Austin Dillon came down a lane to block Busch. Busch’s momentum led him to make contact with Dillon. The No. 3 went up the hill, making contact with Jones. Both drivers smacked the wall, bringing out a caution.

Fortunately for Harvick, the caution period allowed him to go to pit road to ensure all the lug nuts were tight. Busch also pitted to make sure his right front fender didn’t rub into his right front tire.

With all the excitement taking place in the third stage, Joey Logano grabbed the lead and won the stage over Hendrick Motorsports teammates Chase Elliott and William Byron.

The intensity level picked up during the final stage. Martin Truex Jr. and Denny Hamlin made contact. In incredible fashion, there was a four-wide group down the frontstretch. Because of the damage suffered from the incident with Truex, Hamlin’s left rear tire started to go flat. As he dropped low, Ryan Blaney ran into the rear of Hamlin. The No. 11 car spun up the track, hitting Dillon along the way.

Having suffered damage from hard racing, Jones felt a right rear tire go flat. Although he tried to save his No. 20 Joe Gibbs Racing Toyota, he slammed into the wall, bringing out another caution.

During pit stops, Harvick’s pit crew had another slow pit stop, losing several positions as a result. On the final restart, Larson rocketed out to the lead, and he held off Harvick and Busch to win $1 million — his first win in the exhibition race.

Logano and Wallace rounded out the top five with Aric Almirola, Dillon, Alex Bowman, Byron and Truex completing the top 10.

When asked how he would spend his winnings, Larson was speechless. He admitted he and his team were uncertain whether they would even advance into the All-Star Race.

The other action both on and off the track came between Bowyer and Newman post race. Newman felt like Bowyer continually raced him over aggressively. In turn, Bowyer thought Newman was at least one lap down.

On the cool down lap, Newman hit Bowyer in the rear. Bowyer lost control of his No. 14 Stewart-Haas Racing Ford and hit the wall. Angry about the incident, Bowyer ran over to Newman’s No. 6 Ford, throwing a few punches at Newman. As Newman climbed out of his car, NASCAR officials and team members separated the two drivers. Both drivers were called to the NASCAR hauler to discuss what transpired.

Clint Bowyer is NOT happy with Ryan Newman. pic.twitter.com/x2AeNS6ngV

Here's what Ryan Newman and Clint Bowyer each had to say. pic.twitter.com/4fBuwEZ7zE

The Coca-Cola 600 will take place next Sunday (May 26) from Charlotte Motor Speedway. The green flag is scheduled to wave shortly after 6 p.m. ET.

Bowyer is an asshole. Is he taking lessons from “Happy”? Never taking his helmet off when he starts with his temper tantrums. What a putz. He looked like a total tool with this little baby fists hitting Newman. How embarrassing. And I am no fan of either.

Had Clint taken his helmet off and confronted Newman outside the car, Clint would probably still be in pain this morning.

Jughead did it again. Took a car that should have won and went brain dead and clobbered the wall because he couldn’t wait to pass the cars in front and wanted the car to do something it couldn’t. At least he is consistent.