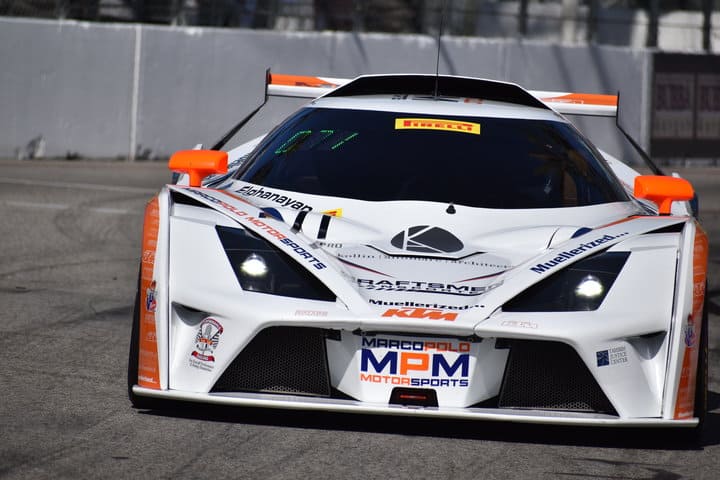 Saturday morning (May 18) saw a great duel in the first Pirelli GT4 America Sprint race of the weekend at Canadian Tire Motorsports Park.  Nicolai Elghanayan was able to make a pass on Spencer Pumpelly stick with seven minutes to go and held on to take his first career GT4 America Sprint victory.

For Elghanayan, it is his first victory as a Pro driver and his first win in a Sprint race.  Last year, he won a SprintX race (while driving solo) at Lime Rock as an Am driver and nearly swept the weekend before tire issues dropped him out of the hunt.

“I’m speechless.  I honestly don’t know what to say,” an exhausted Elghanayan said after the race.  “By far the best race of my career, and I can’t thank Spencer enough for being such a gentleman driver.  We went back and forth a few times and never made contact.  I couldn’t be here without MarcoPolo Motorsports and Muellerized.  They put this car together.  My god, this is amazing.”

Elghanayan had claimed the pole for the race on Friday, but with a 9 a.m. ET start for the race, he struggled early with cold tires.  That allowed Pumpelly to get past Elghanayan’s KTM X-Bow GT4 in his Porsche to take the lead.

Further back, Murillo Racing’s Matthew Fassnacht tried hard to make up for his penalty in Friday’s Pirelli GT4 America SprintX race that cost him a chance at a potential victory.  Unfortunately, he touched the grass exiting Moss Corner.  That caused him to lose control and hit the barriers, bringing out the race’s sole full course caution.  Fassnacht was able to nurse his Mercedes-AMG GT4 back to the pits, but he broke something in the left front of the car.  That ended his race.

Elghanayan’s goal at that point was to simply match Pumpelly’s pace.  That, he was able to do.  Together, the two drivers pulled out a big lead on the McLaren of Blackdog Speed Shop’s Michael Cooper.

Once the lead reached about eight seconds over the McLaren, Elghanayan made his made on Pumpelly for the lead.  With his lighter KTM, Elghanayan was able to take the lead from Pumpelly in Turn 3.  Pumpelly was then again to re-take the lead on the Mario Andretti Straightaway thanks to his power advantage.  In Turn 10, Elghanayan got Pumpelly back with a move to the inside.

Pumpelly was able to get the lead back a little later and held it for several laps.  Despite all the battling, the lead duo were still able to hold their advantage.  Cooper had his own action to deal with as he was leading a five-car pack for third.  Andretti Autosport’s Jarret Andretti was on his tail, followed by Team Panoz Racing’s Ian James and the two Robinson Racing Chevrolet Camaro GT4.Rs for Shane Lewis and Gar Robinson.

As the race continued, Pumpelly’s crew was concerned with tire wear.  While he didn’t exactly take it easily in the second half of the race because of it, it was noticeable at times.  Elghanayan was able to run Pumpelly back down.  The two battled hard for lap after lap until Elghanayan was finally able to make the pass stick late.  A wiggle in Turn 1 for Pumpelly more or less sealed the deal.

Further back, a rough battle erupted for fourth between James and Robinson in the closing laps.  The two had contact multiple times, which allowed Andretti to swoop past the both of them.  On the last lap, James executed a move in Turn 10 that would not seem out of place in the Gander Outdoors Truck Series race at CTMP in August.  Heading into the final turn, James ran up the inside of Robinson and slammed him out of the way to take the spot.

Elghanayan’s margin of victory was 1.633 seconds over Pumpelly.  While Pumpelly was likely disappointed that he didn’t win, he did go up to Elghanayan after the race and congratulated him, telling him that this was one of his favorite races of his career.  Cooper was third, followed by Andretti and James.  James’ bodyslam on Robinson in the final corner dropped Robinson to seventh.

In the Am class, Andretti led the class effectively from flag-to-flag to claim the class victory in fourth overall.  Ian Lacy Racing’s Drew Staveley was second in his Ford Mustang GT4, while Park Place Motorsports’ Alan Brynjolfsson was third.

There is one more Pirelli GT4 America Sprint race this weekend.  It is scheduled to start at 4:30 p.m. ET Sunday and will be streamed live at gt4-america.com.  By virtue of turning in the fastest lap of the race at 105.232 mph, Pumpelly will be on pole in his Porsche.  Elghanayan will start second and the battle may start anew.