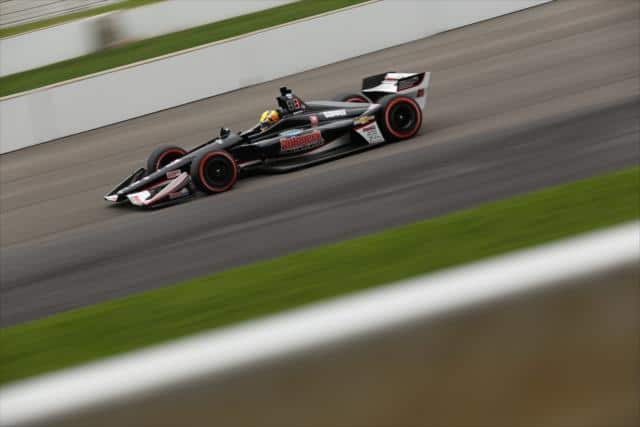 Spencer Pigot‘s dreams of leading the field to the green flag for the Indianapolis 500 could be just one day away.

The Ed Carpenter Racing driver paced the field on Saturday (May 18) to earn the provisional pole and his spot in the Firestone Fast Nine. Rain is threatening the qualifying session tomorrow (Sunday) and if it forces it not to run, then the starting lineup up to position 30 will be set by Saturday’s speeds.

Pigot had a lap average of 230.083 mph to put his No. 21 on the top of the speed charts. His lap was just .002 mph faster than second place and defending Indianapolis 500 winner Will Power.

Results from Indianapolis 500 Qualifying – Day One

21 other drivers punched their ticket to the Indianapolis 500, with Marco Andretti being the first driver to fail to move on to the fast nine. Andretti’s lap was just .044 mph off of Bourdais’ time, meaning he will start next Sunday’s Indianapolis 500 from 10th.

The session was highlighted by one accident involving James Hinchcliffe. At about 1:24 p.m., like a few other drivers this week, Hinchcliffe lost it in Turn 3 and nailed the outside wall.

The car flipped over on its side and came to a stop on all fours. Hinchcliffe was checked and released from the Infield Care Center, and when the team got the backup car ready, they began attempting to push through the top 30, ultimately unsuccessful.

Three spots remain for six drivers. Those six drivers will make one qualifying attempt and the fastest three will qualify for the Indianapolis 500. Those other three drivers will be heading home, failing to qualify. Hinchcliffe, Fernando Alonso, Max Chilton, Kyle Kaiser, Sage Karam and Patricio O’Ward will all battle for the final three spots.

If weather interferes, those six drivers will battle for the final three spots at the next available opportunity, which more than likely would be Monday (May 20). These drivers have one last chance to tweak their cars before qualifying with a 30-minute practice starting at 8 a.m. ET.

The nine drivers who will compete for the pole have a 30-minute practice session, also at 8:30 a.m. ET. Both practices will be available with NBC Sports Gold.