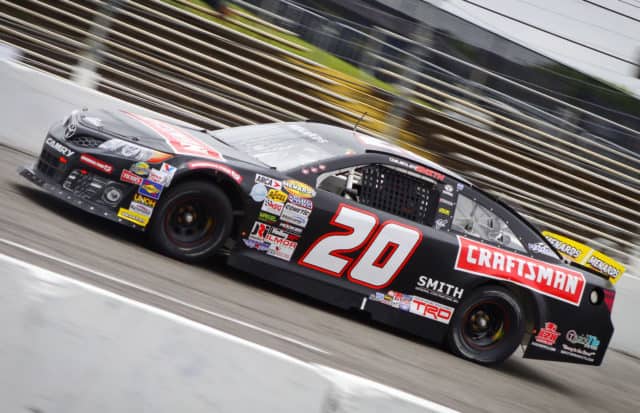 At the front of the field, Sunday’s Sioux Chief PowerPEX 200 was a predictable affair. Venturini Motorsports won the pole courtesy of Michael Self, but it only took 14 laps for Chandler Smith to reestablish a stranglehold on the race lead and run away from the field, cruising to his first ARCA Menard’s Series win of 2019 and the third of his career. The race was shortened to 152 laps after heavy rain moved into the Toledo area around 3:15 p.m. ET, with no break visible on the weather radar (victory lane celebrations were held in the on-track restaurant).

Though Ty Gibbs was maintaining speed with Smith, the No. 20 car was by far the strongest car in the field Sunday, which continued a trend of small fields in the ARCA ranks in 2019; 18 cars took the green flag, the smallest field to start an ARCA race at Toledo since 1990.

While the race went as expected up front, there were two notable incidents that marred Sunday’s race. The first came on lap 28, when Tanner Gray triggered a three-car wreck that ended the much-anticipated ARCA debut of K&N West Series regular Hailie Deegan, also taking out ARCA regular Joe Graf, Jr. The second came on lap 78, when points leader Travis Braden spun in turn 2 and smashed the front end of his Ford Fusion, handing the points lead back to pole sitter Self leaving Toledo.

For the regulars in the Venturini Motorsports stables this Sunday, Toledo proved to be a feeding frenzy that saw the team score their fifth pole and fifth win in six ARCA races in 2019, sweep three of the four top finishing positions and retake the points lead. For race winner Smith, it was more of the same that the ARCA Racing Series has seen on short tracks since last season; dominance. Smith was ruthless (but clean) in hounding his teammate Self for the race lead in the first 14 laps, and untouchable once he got out front, especially on restarts.

Speaking of Self, though he faded during the opening run of the race, mid-race pit stops got the No. 25 back up to fourth in the final finishing order, allowing Self to leave Toledo as the series points leader.

And that leaves Christian Eckes, who sustained momentum from his win two weeks ago at Nashville to finish third, to cut (minimally) further into his teammate Self’s points lead. Despite missing the Salem race while hospitalized, Eckes leaves Toledo still a contender for the season crown.

Also carrying momentum over from Nashville was runner-up Gibbs, who has now scored consecutive runner-up finishes in ARCA competition. Gibbs was the only driver in the field Sunday able to maintain any sort of gap with Smith, but more importantly showed a number of positives in his performance on-track. As discussed in his post-race interview on MAVTV, Gibbs proved stronger on the longer runs of the race, which should bode well for ARCA’s summer stretch (weather permitting).

Further, Gibbs has shown pace on ARCA-specific short tracks under Mark McFarland’s leadership that neither Riley Herbst nor former crew chief Bootie Barker were able to muster away from the NASCAR superspeedways last season. Three years into running a full-time ARCA entry, the No. 18 is starting to look like a Joe Gibbs Racing team.

One other note off the track; two weeks after getting involved in an incident with lapped traffic that seemed immature and impatient, Gibbs was seen post-race shaking hands with the race winner in the middle of the driving rains at Toledo. Respect where it’s earned.

Sam Mayer rounded out the top five in the GMS Racing No. 21 entry, the highest finisher in the field not driving a Toyota. What’s more, Mayer’s run came despite an overheating issue that saw the pit crew on standby in the first half of the race with cooling equipment. Mayer has been the top finishing Chevrolet in each of his last two ARCA starts.

Losing the points lead is one thing. But to lose it as Braden did, in an unassisted spin that destroyed the front end of a brand new race car for his No. 27 team, is a tough pill to swallow (the driver’s frustration was visible on his in-car camera as he exited his wrecked machine). Braden’s 13th place finish was his worst of the season, his first DNF of 2019, and the first DNF the West Virginia driver has ever scored on a short track dating back to his debut ARCA win at Lucas Oil Raceway in 2015.

Per the ARCARacing.com fan pages, longtime ARCA stalwart Brad Smith and his No. 48 team had to withdraw from Sunday’s race due to engine troubles, marking the first time since Salem last April that the No. 48 team did not make the starting lineup for an ARCA event.

Chad Bryant Racing saw both of its race teams suffer through Sunday’s race at Toledo. Corey Heim faded early from his sixth place starting position, battling for position throughout the top 10 until a restart on lap 84, when engine trouble struck the No. 22 team:

Heim ended up finishing 10th (only 11 cars were running at the finish), six laps down. The day ended much sooner for Graf in the No. 77, who was collected in a lap 28 wreck that also collected Deegan:

Hailie Deegan’s first ARCA start ended in a crash less than 1/4th of the way through today’s race at Toledo.

Though Graf has earned himself a reputation in the ARCA ranks, especially after his bull in a china shop run to a win at Berlin last August, this wreck was clearly not of his making. Graf’s 17th place finish was his first DNF of the 2019 season. As for the other victim of this accident…

There’s no getting around it, Deegan’s ARCA debut was an abject failure, and though the wreck was not of her own making, all the results prior to that were. Despite driving the same Venturini equipment that proved dominant at the front of the field, Deegan never cracked the top 10 in practice speeds, qualifying speeds or in the running order before the lap 28 incident ended her race. By comparison to the last five years before Sunday, the No. 55 car has finished top 10 in four of those years (Cody Coughlin was sixth in 2014, Todd Gilliland won in 2015, Dalton Sargeant was second in 2016 and Zane Smith fourth in 2017).

I remain firmly convinced that Deegan is the first female driver since I’ve been following stock car racing with a legitimate chance of making it as a major league driver purely on the merits, namely because unlike every other woman before her, she’s won races at this level (Deegan owns two K&N West Series victories). However, results like Sunday’s stress why taking a slow, deliberate approach to driver development is key.

Just this weekend at Charlotte saw a Venturini Motorsports prospect from 2018, Natalie Decker, prove to be completely in over her head again racing in the Truck Series event Friday night, enduring her third DNF in only six starts in 2019 (and that’s not including the Atlanta race that saw her spin twice of her own accord).

Deegan, being a multi-race winner, there was nothing wrong with the timing of her ARCA debut. But just as that was realistic, folks need to be realistic about what transpired at Toledo. The wreck that ended her race was not her fault, but there was nothing remarkable that came from the laps prior to it.

This feature wasn’t going to completely harp on Deegan, because frankly the ARCA ranks gain nothing from race coverage harping solely on the female of the week (rewind back to Danica Patrick’s debut in 2010, that extra attention went so well that the next ARCA race at Palm Beach drew so poorly that the series didn’t ever return again). But there’s a lot that transpired at Toledo that ties a bit too closely to the 2019 racing season as a whole that needs to be digested with the same frankness as Deegan’s on-track performance this Sunday.

For one, the word “douche” is being thrown around a bit too loosely in stock car racing’s development ranks this year. It was bad enough listening to pit reporter Hannah Newhouse calling Herbst that because she asked an uninformed question and didn’t get the fawning answer she thought she deserved. It was bad enough listening to Smith bemoan Carson Hocevar as that two weeks ago in the ARCA race at Nashville simply for having the nerve to race him hard for a top five position. And there it went again Sunday, with Deegan’s first comments on MAVTV after her wreck included calling Graf a “douche driver” because he had the nerve to race her hard for position as a lead lap car.

Calling other drivers names has long been part of stock car racing, and is part of the emotion of the sport that so many have clamored for in an environment that’s been corporatized. Deegan had plenty of fans for said interview:

@HailieDeegan not holding back on how she felt about Joe Graf Jr. Douche driver. Love it! #ARCA

Having said that, there’s a difference between raw emotion and whining bratty. All three of these incidents cross said line. And Deegan’s own post-race Twitter reaction only added fuel to that fire, as if suggesting the fact she was a girl was why she was raced oh so hard:

Lil recap from my from my first @ARCA_Racing experience pic.twitter.com/f1DxLcs0sN

It couldn’t have been that Graf and Deegan were both on the lead lap, racing for position after both experienced qualifying runs that were less than what their cars were capable of, and both were urgently trying to move forward knowing that rain was on the horizon at Toledo. But gender issues aside (on #millenial weekend in racing, let’s not forget gender is just a social construct…wink wink), Deegan’s complaining that she was being blocked just sounds petulant. Race winner Smith, driving the exact same equipment, had the exact same thing happen when battling with Self for the race lead…only difference is, he was able to make the pass.

The literal complaining of drivers that other competitors have the nerve to block them is become deafening…and it’s not just in the development ranks. Saturday night at the All-Star Race in Charlotte, former Xfinity Series champion Clint Bowyer became unhinged for the second week in a row, throwing literal punches at Ryan Newman, a driver with the (gasp) reputation of being hard to pass, while the man was still strapped down in his race car:

Again, the word is petulant. And while drivers from age 17-47 these days may find petulant behavior acceptable, their actions are far from heroic.

Maybe that’s why the stands at both Charlotte and Toledo were far from full this weekend.

Daddy can push all he wants. Halley isn’t ready for a larger pond. Stay in Cali with the surfers and posers like your dad.