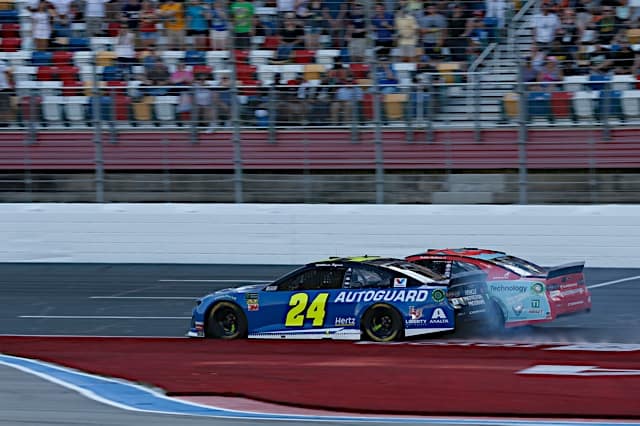 The Monster Energy All-Star Race weekend should be about showcasing the best and brightest talents in the sport.  But in this year’s running, the best overall race was the preliminary event.

The Monster Energy Open was a thrilling race from start to finish.  The three mini-races spread over a total of 62 laps had a little bit of everything.  There were close finishes, surprise winners, drivers irritated with each other, varying pit strategies, feel-good stories, and results which had a major impact on the main event.

The most eye-popping moments were the finishes of the first two stages.  Just when it looked like Daniel Hemric would run away with the first transfer spot, a caution for B.J. McLeod’s expired engine put the rest of the field back in play.  While Hemric, Kyle Larson, Bubba Wallace and several other drivers did not pit, William Byron took the opportunity to get four fresh tires.  That turned out to be just the advantage Byron needed.  When Larson and Wallace began battling for the lead during the overtime restart, the No. 24 car sliced through the field, pulling even with the No. 43 machine at the exit of the final turn.  Byron nearly went for a slide as he tried to pass Wallace, but ultimately prevailed by inches in a drag race back to the finish line.

However, the lesson for Wallace was if at first you don’t succeed, try and try again.  After pitting during the stage ending caution, the No. 43 was stuck back in the pack, while Alex Bowman and Daniel Suarez fought for the next transfer spot.  But once again, there was a twist ending.

While trying to complete a pass on Ryan Preece, Hemric slid up on front of the No. 47 without being totally clear, sending both drivers into the wall.  Preece responded by spinning Hemric through the infield, triggering another caution with a few laps left in the stage.  Once again, Wallace did not pit.

Restarting on the front row in second, Wallace got the lead thanks to a push from Suarez, who had fresh tires.  However, the disadvantage of having older tires than his competition worked against Wallace again.

In the last turn of the last lap of the stage, Suarez attempted to swoop low and pass Wallace, just as Byron had done.  But this time, Suarez went sliding into the infield and Wallace held on for the win.

No doubt that transferring to the All-Star Race felt good for Byron and Wallace.  Byron remains relatively new to the Cup Series and is still seeking a victory in a points-paying event.  His strong record in the Xfinity Series and pairing with crew chief Chad Knaus elevated expectations for the No. 24 team this season.  But aside from a strong showing in the Daytona 500, things have been pretty quiet for Byron in 2019.  With only one top 10 in the last five races, the No. 24 needed some positive momentum.  Perhaps Byron’s triumph in the Open will provide it.

As for Wallace, transferring to the All-Star Race has to ease the frustration of a rough season.  In the last week, Richard Petty Motorsports was the subject of more than one rumor concerning the instability of the team’s future.  While RPM does not appear to be in imminent danger of closing, funding concerns, along with the professional and personal struggles of Wallace, have made for a difficult season.

Fortunately, winning can immediately change the attitude of any team, and Wallace’s win was the feel-good story of the evening.  The image of Wallace hugging buddy Ryan Blaney is indicative of just how wide and intense the emotional range of stock car racing can be (especially when paired with the Clint Bowyer – Ryan Newman fisticuffs fans witnessed just a few hours later.)

And speaking of emotional range, Larson’s was probably pretty wide on Saturday night as well.  He walked away as the third winner of the Open and final driver to transfer to the All-Star Race, along with fan vote winner Bowman.  Yet judging by his postrace comments, Larson clearly wanted more.

“It was kind of a cluster of a race,” Larson said.  “I didn’t feel like we did a really good job as a team.  I screwed up on that restart at the end of the first (stage) and allowed Bubba to get to my inside, and we’ve just gotta clean some things up to have a shot here later, or the rest of the year.”

Suffice it say that the No. 42 team did clean things up for the main event.  While Kevin Harvick, Kyle Busch, and Joey Logano had the fastest cars, the race came down to having the right track position at the right time.  Larson and his team executed flawlessly in terms of positioning for the final stage. In a finish that echoed the Open, Larson held off a late charge from Harvick to win the All-Star Race.  Having endured a season of self-inflicted mistakes combined with bad luck, the No. 42 team finally closed the deal and took advantage of an opportunity to score a big win.

It is only natural that the All-Star Race winds up overshadowing the Open.  This year’s event was one of the best All-Star Races in the last decade, and the confrontation between Bowyer and Newman will be on highlight reels for years.  But no one should forget what great racing the 2019 All-Star Open produced.  Between the winners, finishes and stories of redemption that unfolded on Saturday evening, this supporting race stood up just fine on its own.