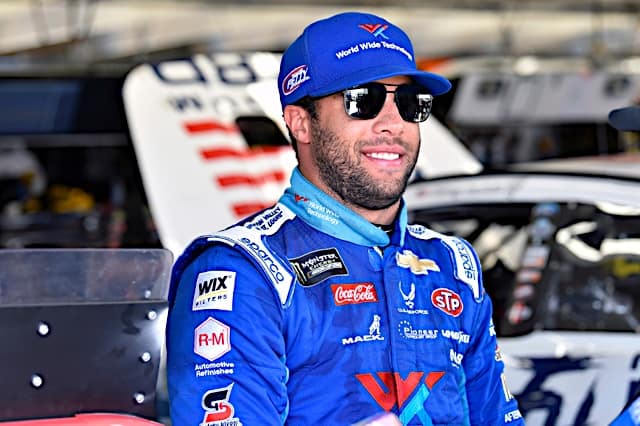 ONE: Maybe We Shouldn’t Write Off Kyle Larson’s 2019 Season Just Yet

Of all of the eternal debates in sports, figuring out how much weight to assign to momentum has to be in the top three or four of all time. It’s even trickier to determine what part it plays in NASCAR, where the changing tracks from week to week mean that teams can easily have one circuit figured out to a tee and be totally clueless a few days later.

Still, it’s hard to argue against the idea that when things are going wrong, it only takes one really good result to give a driver and their team the belief that they have turned the corner. Kyle Larson got that on Saturday night in Charlotte, capturing perhaps the most significant non-points race win in recent memory. Insert your own wisecrack about a million reasons to feel better here.

No one has been or should be questioning Larson’s talent, but to say things have not gone according to plan since he busted out with four wins during the 2017 season would be a huge understatement. It was only natural to assume that he’d continue to be one of the leaders of the under-30 crowd, finding victory lane with some regularity. That he hadn’t won since the fall Richmond race two seasons ago was starting to border on the ridiculous.

Despite all the qualifiers on his All-Star Race victory — smaller field, shorter distance, gimmicky rules package all among them — it has to mean something for the No. 42 team, who now have at least loosened the grip of the proverbial monkey on their backs. It’s at the very least going to remind fans and the rest of the garage that “oh yeah, Larson is pretty good.” It’s not a proof point for momentum, but it certainly can’t hurt.

TWO: Bubba Wallace is the Kind of Story That Makes the Open Worth Running

Not to be lost in Larson’s potentially season-saving moment was the fact that there were really two winners on Saturday. Bubba Wallace won the Open, then followed it up by finishing in the top five in the All-Star Race itself.

It would be easy to repeat the first section of this column and say that it all applies to Wallace too, but he was in a much darker place than Larson heading into Charlotte. If you follow the sport, you’ve seen the rumors. Imagine being the driver of the iconic No. 43 when the whole team shuts down. That’s the kind of pressure no one needs, particularly when you’re searching for your first top-15 result since Phoenix last fall.

The Open means even less than the All-Star Race most years, as it’s mostly just a way to get more racers who probably wouldn’t fit most definitions of “All-Star” into the main event. It’s a contrivance on top of a contrivance.

This one flipped the script, though, offering up some real emotion and a feel-good narrative for an organization that desperately needed one. Unlike Larson, Wallace almost certainly isn’t going to start running up front now. But no matter what happens in the Coca-Cola 600, he’ll leave Charlotte feeling much better than when he arrived, and that alone is an argument in favor of the Open’s continued existence.

THREE: Is a Fight Really a Fight If Only One Guy Throws Punches?

Let’s make this column live up to this name and really ponder something: What exactly is the right term for what went down between Clint Bowyer and Ryan Newman?

The sports media breathlessly reported it as a fight, so much so that even non-NASCAR fans have seen this clip by now:

That’s not really a fight, per se. It’s more like Bowyer running over, using Newman’s head as a speed bag, then backing down once others come over to put it to a halt. Newman never got a chance to retaliate, which isn’t that surprising considering, you know, he was still in his car.

In hockey, players only get five for fighting if both of them are willing combatants. That wasn’t really the case here.

So sorry, but this wasn’t truly a NASCAR fight. That’s okay since confrontations like this — in a non-points race, mind you — serve as reminders that these drivers and teams really care a lot. But the official ruling is that Bowyer gets two minutes for roughing. Maybe we’ll see an honest to goodness fight between the two of them later this season.

FOUR: NASCAR Should Think About Leaving the All-Star Race Alone for Next Year

The old adage about change being the only constant is more applicable to the NASCAR All-Star Race than just about anywhere else. In order to make the event exciting, the powers that be have constantly tinkered with the rules, the format, the way drivers get in and pretty much every aspect of the event. It’s understandable considering that NASCAR has to sell it on its own merits, with all the same faces fans see battling for wins every week.

Here’s the thing, though: Fans really enjoyed the 2019 version.

Was the All-Star Race a good race?

— 91 percent of you said Yes, making it the new best race of the season.

— This is the second straight race to join the 90 Percent Club (only 13 races out of 125 polled) and the third intermediate overall.

Jeff Gluck’s ‘Was It a Good Race?’ poll is starting to become sort of the Rotten Tomatoes of NASCAR. If a race gets a good score, that doesn’t guarantee you’ll like it, but there’s a strong chance that a really high score will correlate to any given fan enjoying it.

This year’s All-Star Race got 91% ‘Yes’ votes, the largest percentage of positive responses so far this season. Perhaps more tellingly, it outperformed last year’s All-Star Race, considered by many to be a good show, and destroyed the 2016 and 2017 iterations.

At some point, then, the law of diminishing returns is going to kick in when it comes to NASCAR continuing to change things up. Is it really worth risking this much goodwill to seek a few more percentage points when a large majority likes what it just saw?

There’s still a strong argument to be made for freshening up All-Star Weekend by moving it somewhere else, but absent that, NASCAR might want to consider going with something very similar in 2020. More than 9,000 people who care enough to vote in Gluck’s poll are likely representative of a wider trend in fan sentiment, and this is one race that needs that on its side.

FIVE: Should the Other National NASCAR Series Have All-Star Races Too?

Wait, don’t click away from this column yet. In both baseball and hockey, minor leagues have All-Star games, so the idea of the Xfinity and Truck series having similar affairs shouldn’t just be dismissed outright.

Granted, the crowds for both series can be a little sparse, so the idea of getting fans to shell out for seats when no victories or points are at stake could be challenging. On the other hand, there are creative ways around that too, especially if all three All-Star races were held the same together on the same weekend.

If names are truly made in the Xfinity Series as the current, pretty effective commercials insist, then giving them an extra chance to have some of the spotlight would be a good thing. The racing in the Truck Series has been awesome at times, and with additional money as incentive, it would be as close to guaranteed fireworks as this sport could create.

Better still, NASCAR could use the additional All-Star races to experiment with rules packages like it does in the Cup Series. There’s really no downside here, save for the very real chance of torn-up vehicles for teams with much smaller budgets than in Cup.

NASCAR could figure out a way to lessen that sting too if it wanted to do so. Maybe it’s just the afterglow of an especially successful All-Star weekend that makes all things seem possible, but even the chance of multiplying that times three should be food for thought.

There is no doubt in my mind “Bubba” is the new Danica. Mediocrity is somehow twisted into greatness by the everybody get’s a trophy crowd. Sad, but given the identity politics that erode our society regarding achievement, this does not surprise. The same hype was bestowed on DP. How did that work out? It actually made things worse for our society. Her lack of good performances and praised in the media as if she had GREAT performances, exposed the rot and lies in our society. It is not what color you are, what gender you are, what color or gender you purport to be.. IT IS WHAT YOU ARE PRESENTLY regarding your talent, skill, achievement and work ethic that you are viewed on, graded on and how you are competitive or not with the very best of your peers! That is it. It is that simple.

kb – i laughed when i turned on indy qualifying on sunday afternoon and saw princess sparkle pony sitting in the booth.

As an aside, Happy Birthday to you Janice and congrats on the 40th renewal of your 20th birthday. Janice has been reading (and commenting on) my columns since back in the mid 80s when I started out at Mike Calinoff’s Stock Car City newspaper and through all the strange (and largely defunct) websites where I’ve hung my hat since.

Again with the sour grapes. Some people like to make misery a habit. I like the idea of ‘all stars’ from the other series having their moment in the sun. I think they should move this race to the Wed. before the 600. Gives them a ‘test market’ for a mid week race, and give those in town early something else to lokk forward to.

Yeah, let’s give Kyle another chance to rob from the poor to give to the rich in two series.

How quickly you all forget that Danica IS an all-star… After all, she won the fan vote one year and therefore got to race in the all-star race, making her a bonafide, certified Nascar all-star, complete with all the honor and prestige afforded by said all-star race participation. Just because she didn’t earn it doesn’t mean she isn’t entitled to it. #danicatoo