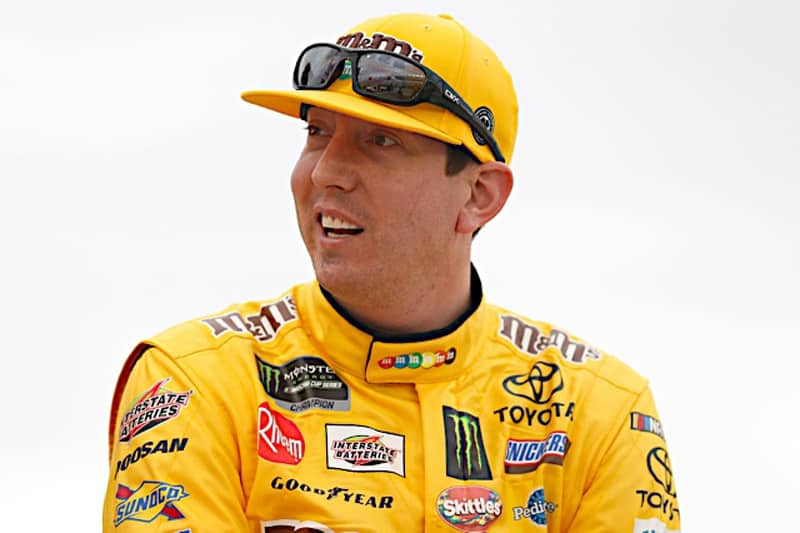 After a wild back and forth race, Kyle Larson broke his winless streak (even if it didn’t technically count since it’s a non-points paying race) and went to a Victory Lane to win the trophy and the $1 million prize. The real question, however, is how far did Larson move up in the rankings this week?

Kevin Harvick was on track to claim his first victory, before once again, a problem that was not his fault, a slow pit stop, ended his chances at getting Stewart-Haas Racing into the win column for the first time this season. Can everybody work in unison to win the Coca-Cola 600 this weekend, or will more problems evolve?

Once again, Clint Bowyer was not pleased at the end of the race and took out his frustrations with using his fists toward Ryan Newman before Newman could even get out of his car. Will Newman or Bowyer continue the shenanigans this weekend when points and stage wins are on the line?

Tons of questions were brought to the table but there were very few answers. One answer everybody has, though, is who is top of the Power Rankings chart. Here is how everybody ranked the Monster Energy Cup Series drivers after the All-Star Race at Charlotte.

After last week’s slide to the second place, Busch was right back where he has been since Las Vegas (the third race of the season). After winning the Gander Outdoors Truck Series race on Friday night (May 17), Busch started in second and looked like there was a fairly good shot that his Toyota was going to wind up in victory lane. However, he just did not have the short run car and had to settle for third.

Even though he didn’t win, it did look like he enjoyed not racing on Sunday.

“It wasn’t the 600 folks. Look out Sunday.” – Ed Coombs, SpeedwayMedia

“No beard and he nearly won at Charlotte.  Wonder if he gained an aerodynamic advantage??” – Rob Tiongson, The Podium Finish

It was a rather uneventful night for Logano, as he wasn’t contending for the win all night long. But unlike his two other Team Penske teammates, he wasn’t so far off that he had no chance for a fairly solid finish. He would’ve challenged for the win if he had more laps after he went in for four tires during the last caution. He will definitely want to have a better outcome for his team owner for the 600.

Proud of our 22 team tonight. Was a fun race we just came up a bit short at the end. Ready to go after that @CocaCola 600 trophy next weekend! #NASCAR #TeamJL

“Joey Logano came in fourth place at Charlotte Motor Speedway. Fortunately, he already has an impressive NASCAR resume. He is the reigning Cup Series champion, he’s won the Daytona 500, and he is a 28-year-old piece of Sliced Bread..” – Mark Kristl, Frontstretch

With a bright pink car that featured words like “AF,” “Skrrt” and “Yeet” along with emojis, Harvick almost “skrrted” into victory lane. Unfortunately for him, it was the same story, different weekend. The No. 4 crew had a slow stop on pit road and had to settle for third place.

When will Harvick and his pit crew put all the pieces together for his first win of the season?

such a joy there’s a car that says YEET zooming around the track pic.twitter.com/vPkI5RLmEw

“I’m sure none of us turnt left to realize how awesomely epic Harvick’s millennial car was and how much we’ll miss it!” -Tiongson

Unlike his teammate, Keselowski had a tough weekend at Charlotte. He was way off in practice as he was last in the first practice for most of the session due to a power steering issue.

The issues continued for the No. 2 car as he was not in contention the entire race.

After the race was over, he had some other business to attend to that is more than racing itself. His daughter Scarlett’s birthday was the following day after the race!

For the last few years, Sunday after the all star race has been my favorite day of the year. It’s the day we celebrate my daughter Scarlett’s Birthday.

She is young enough to have no expectations whatsoever & her innocence gives joy in all activities.

“After a pedestrian finish this past Saturday, maybe more Carly Rae Jepsen is in order for Brad K.” – Tiongson

It was a fairly quiet night for the young man from Dawsonville as his teammates (Alex Bowman and William Byron) took advantage of The Open to advance to the All-Star Race.

“With 13 laps to go, Chase Elliott led the All-Star Race. When the checkered flag flew, he was in 14th place. Does losing an unlucky 13 positions give a bad premonition for his Coke 600?.” – Kristl

Apparently, if you go on the Dale Jr Download podcast, you get more aggressive because not only did Bowyer get into a fight, Truex was not afraid to rough up his fenders on Saturday night. It didn’t even matter if it was his teammates that got the short end of the stick!

“Truex has the idea of teammates down pat if he was an F1 driver because he sure didn’t provide any love to any of them at Charlotte.” – Tiongson

What can seven days do for you? Ask Larson.

After telling reporters he feels like they have an eighth to 12th-place car most weekends, last weekend in Kansas he took his Advent Heath Chevrolet to victory lane for the first time since Richmond in 2017. Larson had to endure multiple restarts and had to overcome challenges from Kyle Busch as well as Harvick.

I think it was a pretty good birthday present for his daughter who turned one the night before the big race.

Wow just getting home after an unbelievable night! Crazy to think we won the #AllStarRace. Car was great all day. Thanks to my team @CGRnascar and @AdventHealth. Some cool colors to win with! pic.twitter.com/qsRB2fZJTp

Like the driver that he was battling for the win the night before (Kyle Busch), Larson also enjoyed the rare Sunday off as him and his wife took to the lake to go boating and as you can see, they had a fun time.

For the first time ever, Alex Bowman won.

The Fan Vote that is.

After his teammate William Byron raced his way into the All-Star Race, Bowman had to rely on the fans to vote him in, as he finished third in the final stage in The Open.

Bowman was really not in contention the entire night and broke the streak of finishing second, for the fourth straight race, by finishing eighth.

Wish we had raced our way in but you guys made this happen for me. I’m ready to get back out there and give it another shot. ?? Wanted to say thank you with a giveaway. Retweet this for a chance to win this hat. #AllStarRace pic.twitter.com/N40gZOybn3

“If Bowman had finished in 2nd place yet again, he would have to be called Cal Naughton, Jr., but he ended up in 8th.” – Ryan Holman, Ryan Holman on YouTube

On this episode of who is Bowyer mad at…

The winner is… Ryan, the Rocketman, Newman!

Bowyer was not pleased with Newman after the race and expressed his demeanor with the Roush Fenway driver by going up to his car and looking like Mike Tyson with his back and forth arsenal of punches to the inside of Newman and Newman’s car.

One piece of advice: lose the helmet next time, man!

Clint Bowyer is NOT happy with Ryan Newman. pic.twitter.com/x2AeNS6ngV

It looked like the Daytona 500 winner was having a good day, but once again, when $1 million is on the line, all hell breaks loose and unfortunately for Hamlin, he was the causality.

Denny Hamlin went around with 13 to go. pic.twitter.com/0evvQimkdV

“Theoretically, Denny Hamlin relayed to his Joe Gibbs Racing team that he had a flat tire. In reality, he pulled down in front of Ryan Blaney. The end result? A DNF for Hamlin in the All-Star Race..” – Kristi

While his teammate won his first race of the season, the leader, by a fair amount between the two, was practically invisible all weekend long. He was slow in qualifying, he was slow in the race, and well, he was just plain slow.

Here is hoping something changes for BOTH CGR cars up at the front on Sunday night.

After a sluggish start to the season after Daytona, William Byron and Chad Knaus are starting to get into a groove. Will this groove translate into success? Time will tell.

“Willy B wheeled his way into the All-Star race.” – Lambeth