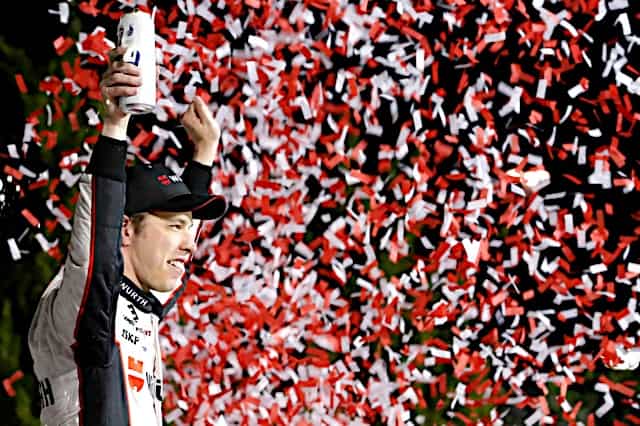 There are many ways to win in NASCAR, and not every race produces the one everyone wants to see. Take a race like Martin Truex Jr. had three years ago this coming weekend, in the 2016 Coca-Cola 600. Truex led 392 of 400 laps.  There were actually nine lead changes in that race, but there was never any doubt that he had the best car. A little perspective: Truex led more laps that night than there are in a 500-mile race on the same track. It would have been a shame if anyone else had won. Truex and his team earned that one.

A driver running away with a race might completely deserve the win, but it doesn’t exactly make for the kind of race that gets fans on their feet.  When a driver can take his car to the ragged edge and not back down, even though someone might have a faster car or better tires.  That’s the kind of race that produces a close, thrilling finish.

Ricky Craven’s Darlington win in 2003, the closest margin of victory ever in a Cup race, and a race fans talk about more than 15 years later. Kurt Busch had the then-powerhouse Roush Fenway Racing behind him; Craven was driving for Cal Wells’ considerably smaller organization.  Craven may not have had the fastest car, but he went out and took the won away from Busch.

As much as fans don’t like to see a fuel mileage race, a tire call deciding things or the weather intervening, these races are unpredictable and produce results that are different from what fans see every week.  They’re no less of a win than any other on his list and don’t deserve that distinction from fans.  Sometimes it’s true that a driver would probably not have otherwise won, but you know what?  On that day, under those circumstances, he and his team outplayed every other.

A classic example is the 2007 Coca-Cola 600 which produced top three that included a first-time winner (Casey Mears), a career-best second-place run (JJ Yeley), a driver’s best finish in a decade (Kyle Petty), another career-best in fourth place (Reed Sorenson, though he would better that once later on his career) and a team’s first-ever top-five finish (Brian Vickers for Red Bull). It doesn’t get much less predictable than that.

At tracks like Daytona and Talladega, teamwork can make the difference between a win or not.  That doesn’t necessarily mean actual organizational teammates, but sometimes it does.  In 2011, the spring race at Talladega was so closely contested that Jimmie Johnson and teammate Dale Earnhardt Jr., who had worked together all day, finished first and fourth, as Clint Bowyer finished second to Johnson with Jeff Gordon finishing third before Earnhardt, on Johnson’s bumper, crossed the line.

Finally, there’s the late-race move to take the win by force.  Fans saw it at Martinsville Speedway last fall when Joey Logano gave Truex just enough of a nudge coming to the line that Truex bobbled the tiniest bit. It was just enough to let Logano take the win.

Logano’s classic bump-and-run gained him some fans and the ire of some others, but it was an age-old move.  Another move that, like Craven’s Darlington win, still gets airplay and stirs up emotions years later is Dale Earnhardt’s 1999 Bristol win, where he spun Terry Labonte to take the win and said afterward that he was only trying to “rattle (Labonte’s) cage.” Labonte had used his own bumper moments before to root Earnhardt out of the groove, and Earnhardt went a step further, spinning Labonte, and took the win back. No doubt, the chrome horn is remembered for years to come, no matter which side of the battle fans are on.

#5 – If they aren’t screaming or booing, you’re not doing your job well

I was a huge Labonte fan too, but wreckers or checkers and also why you don’t want to make your move too soon!

Cautions for certain drivers near the end help too.

For sure! Especially when BZF had his pudgy fingers in the pie. To me it was outright race manipulation to make sure his favorite large owner got the win. A hot dog wrapper was the dominate and best drivers worst nightmare.

Or lack of an absolutely necessary caution if a favorite driver of theirs is ahead.

Watching that clip of 2011 (#4) reminded me of how stupid and gay (not that there’s anything wrong with that) tandem racing was.