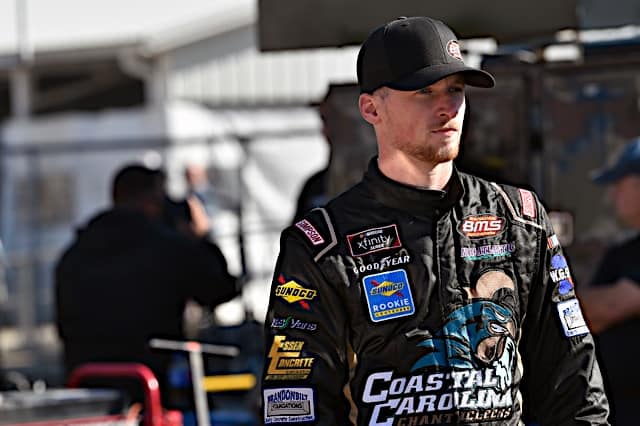 No one will soon forget the determination and elation two weeks ago at Kansas Speedway when Ross Chastain won his first Truck Series race. Stewart Friesen ran out of fuel with three laps remaining, and Chastain took the lead from then on. Long considered an underdog, Chastain proved that such a victory is attainable despite being almost unimaginable. What other dark horses could accomplish the same feat?

Brandon Brown drives for Brandonbilt Motorsports in the No. 86 car. The team announced Monday (May 20) they will field two cars at Charlotte. Mason Diaz will hop in the 86, and Brown will drive the No. 68 car. Brown has had some incredible results this season, even without a primary sponsor for the first seven races. Out of 10 events so far, he has five top-15 finishes, including the most recent race at Dover (13th). Brown certainly does well in a sport where so many rely on good funding to compete with the top tier teams.

One more interesting item of note is that Brown not only finishes in the top 15, but he also runs in the top 15. He’s run at least 65% of the laps 15th or better in three races, and one of those close to 80%. As long as he can stay away from pit road trouble (like he ran into at Talladega), he’s a sure candidate to perform as well or better than his peers.

Ryan Sieg is probably one of the most impressive underdogs in the Xfinity Series. Driving the No. 39 Chevrolet for RSS Racing, Sieg’s worst finish in 2019 was 16th at Talladega. I mean, we all know what can ensue on that racetrack. He has two top fives, five top 10s, and ends races with an average finishing position this year of 9.6. That’s his best average finish in his entire racing career! Why is this his most successful season to date? Well, the team switched to Earnhardt-Childress Racing engines. They also bought some cars from Richard Childress Racing in the off-season. Better equipment combined with a talented driver leads to better performance.

The full-time Truck Series driver for Young Motorsports certainly has the capability to win. Spencer Boyd, in the No. 20 Chevy truck, finished fourth at Daytona. Granted, it was Daytona, where chaos and wrecks abounded. Only nine trucks completed the race to see the checkered flag. Still, he avoided all the trouble and nearly won the race. Boyd also has a couple of top-20 finishes this year: 11th at Texas and 17th at Kansas.

Last season, Boyd raced full time in the Xfinity series for SS-Green Light Racing. The team had so many troubles last year, from the suspension causing early retirement to crashes. Yet Boyd still earned a 17th-place finish at the July Daytona event and 19th at Kansas in the fall. If he can race like that for such an underfunded team, he can capture a victory like Chastain.

This young fellow has had some great finishes the last two years. Tyler Dippel, Boyd’s Young Motorsports teammate, has one top 10 in the eight races run so far. He completed the race at Texas eighth. His worst finish since Daytona this year was 23rd at Martinsville. He also has two straight top-15 finishes (12th at Kansas, 13th at Charlotte). Did I mention he’s only 19? Such performances from a teenage driver display how talented he really is.

In 2018, Dippel drove the final four races for GMS Racing in the No. 25 truck (and No. 17 for DGR-Crosley at Eldora). His lowest finish in that span was 17th. Even though he only has one top 10 to date, he still showed how much potential he has in NASCAR. As long as he isn’t rushed into the higher series, he should mature and eventually win a race.

I saved the (possibly) best for last. Jesse Little, who currently drives the No. 97 truck for JJL Motorsports, is extremely talented (though admittedly with a small sample size). He only has raced in five races so far this year and has two top-15 finishes. Last year, however, was especially notable for Little. Out of nine races, Little earned six top 10s. Six! That’s incredible! At Iowa, he earned his best finish of the season (sixth). Little closed out the year at Homestead in ninth place, exactly where he started. The results are not as good this year so far, but that could be because of growing pains and a new manufacturer, as the team switched from Toyota to Ford and acquired equipment from Brad Keselowski Racing in the off season. Hopefully, the group can get in a position to compete like they did last year. If they can, you can be sure that Little will earn a victory.