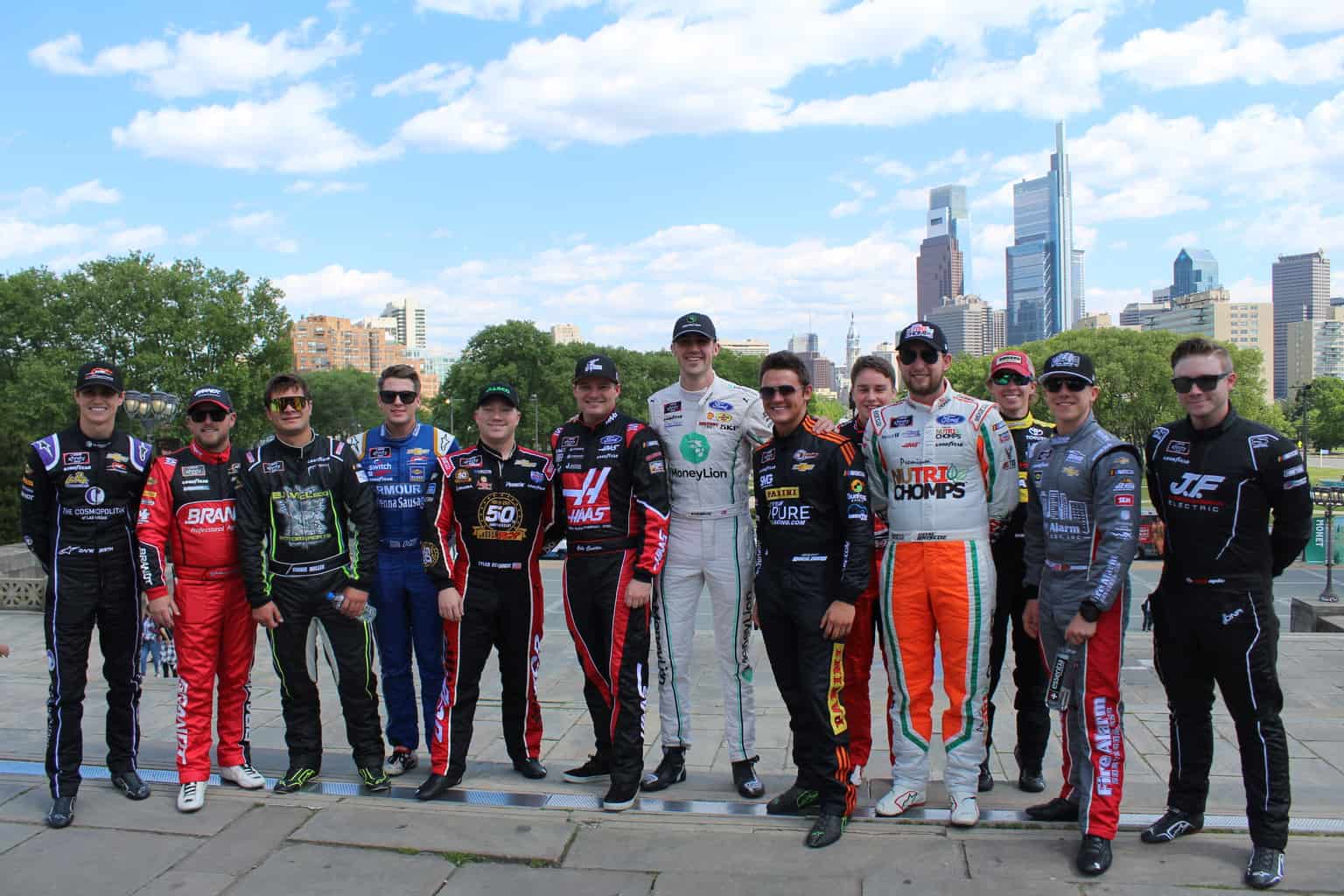 From the outside, casual race fans probably think of Xfinity as just a TV and Internet service provider. But when looking at what Xfinity does for NASCAR from the inside, it’s much more than that.

Sure, at the beginning of each season or when Xfinity comes out with something new, NASCAR Xfinity Series drivers might be coached on what to say about a product to earn some brownie points and promote the series. On the flip side, Xfinity has stepped up as an entitlement sponsor in NASCAR like not many others in recent memory, specifically at the Busch and Nationwide level.

“I’ve driven in a lot of different racing series in my career, and I think out of all the entitlement sponsors, Xfinity does the most for their communities and for the race fans,” Austin Cindric recently told Frontstretch. “The amount that they do is head and heels above any other race series that I’ve been in. It’s cool to experience.”

For instance, look at the Xfinity Takeover of Philadelphia last week (May 14-15). Justin Allgaier threw out the first pitch at the Milwaukee Brewers vs. Philadelphia Phillies game on Tuesday (May 14), only to follow that up with the real fun on Wednesday (May 15), adding 16 of his closest competitors on the track to the City of Brotherly Love.

Some of the top 2019 series drivers, such as Christopher Bell, Tyler Reddick and Cole Custer took part in the takeover, the fourth consecutive year NASCAR has taken over the city.

Why? Comcast, who owns Xfinity, is based in Philadelphia. But the efforts also promote races at Pocono Raceway and Dover International Speedway, as both tracks are within an hour-and-a-half of the city.

So what did the drivers do during the takeover?

Four drivers: Brandon Brown, Chad Finchum, Kaz Grala and Joey Gase spent time doing a Q&A at the Franklin Institute, which is a science museum and the center of science education and research. After that, that quartet of drivers spent time flipping cheesesteaks at the famous Geno’s Steaks, while also visiting a local elementary school.

The other 13 drivers, which included Cindric, Allgaier, Bell, Reddick and Custer, participated in an autograph signing at the Comcast Plaza and also watched members of the National Guard be sworn in. It was such a prestigious event that even the Philadelphia Eagles and 76ers mascots made the trek downtown. The remaining eight drivers at the takeover were Brandon Jones, Chase Briscoe, Gray Gaulding, John Hunter Nemechek, Matt Mills, Noah Gragson, Vinnie Miller and Zane Smith.

Following the Fan Fest, 10 drivers sat on the top of a double-decker tour bus for the Center City Parade. Meanwhile, Cindric, Reddick and Briscoe paced race cars around the city in front of thousands of race fans… literally. Unfortunately, Reddick burnt a rear gear before doing burnouts in the city, but driving a race car in a major city is something Briscoe will never forget.

“Probably just driving the racecar around downtown Philly, by City Hall — there’s nothing more American than driving a race car around City Hall,” Briscoe said of the coolest thing he’s done with Xfinity. “Close to that is racing for $100,000 (Dash 4 Cash). For us, to have four times throughout the season, they really spotlight the drivers that are in it, and it’s a big opportunity.”

Thanks to @XfinityRacing for allowing me to do something I never thought I would do in my life. Drive a racecar in the city streets of Philadelphia around city hall. I’m sure our founding fathers would be proud of how American it was. ?????? pic.twitter.com/rNmMTRrM2e

Following the parade, drivers were taught about new Xfinity products, while also being open to the media. The takeover concluded with a bus tour of the city (the moderator was incredible, knowing every finite detail about the city) before making the final stop at Chickie’s & Pete’s for a NASCAR Heat 3 Gaming Event, allowing fans to play video games against the drivers.

Overall, many of the drivers believed the takeover was successful.

“We want to make sure that if they [the fans] are taking the time out of their day to watch what we do, we want to put on a great show for them and give out to the community. I feel like that’s what this event really does for us.”

Cindric, 20, who spent some of his childhood growing up in Pennsylvania, echoed Allgaier’s sentiments.

“For a 20-year-old, it’s a pretty cool experience, to not only have fans come up to you and ask you for your autograph but fans that know who you are and follow your racing and want to know about your racing,” Cindric said. “There’s a lot of fans [at the takeover] that I saw at racetracks before and been able to talk to them and they tell me what tracks they’ve been to since the last time they talked to me or when the last time they saw me was.”

Not my normal @FordMustang or backdrop ?? Thank you to all the Philadelphia race fans who spent the day with us, hope to see everyone @poconoraceway in a couple weeks, and back @MonsterMile for the Playoffs! pic.twitter.com/2v7Z8ckUFe

Bell, who attended his second takeover, couldn’t believe the flocks of fans that stormed the streets in what he doesn’t consider a racing city.

“You come to a downtown, urban setting, Philadelphia for that matter — you don’t think of NASCAR when you think of Philadelphia,” Bell added. “To see all the people that come out and bring diecasts or hero cards and wear NASCAR hats and NASCAR shirts, it’s really cool to see the NASCAR presence here in not what I wouldn’t consider a NASCAR town.”

But it’s not a surprise to see the rise of Xfinity. Hell, last year, Comcast was rumored to buy NASCAR from the France family.

Since becoming the entitlement sponsor of the top preliminary series in NASCAR, Xfinity has grown leaps and bounds on the racing presence. This was the fourth consecutive Xfinity Takeover of Philadelphia. But the charitable work is second to none.

On Friday, May 3, it was the 18th annual Comcast Cares Day. Many Xfinity drivers, hundreds of volunteers, including local Comcast NBCUniversal employees and their families, friends, community partners, United Way Worldwide and Lowe’s members volunteered to build a KaBOOM! playground at the Boys & Girls Club of Delaware.

On Saturday, May 4, former Xfinity drivers Daniel Hemric, William Byron and Ty Dillon participated in the Watch Us, Watch NASCAR program at Dover. The drivers watched the Xfinity race with FOX Sports personalities Jeff Gordon, Jamie Little and Alan Cavanna as it was streamed on a plethora of streaming services. The goal of this, for the second straight year, was to hopefully bring NASCAR fans a second-screen experience to Xfinity race broadcasts while also engaging with fans on social media.

Meanwhile, since 2015, the inception of the Comcast Community Champion of the Year program has developed into one of the most prestigious honors presented at the end of the season because the nominations are coming from race fans and the winner’s peers within the industry. In total, Xfinity has donated $480,000 to people and charities making a difference away from the racetrack.

It’s also a strong supporter of the military. Xfinity has distributed $120,000 in grants to the Veteran Services Organizations in each Dash 4 Cash race market to build Internet Essentials Digital Rally Points for local veterans, something the company doesn’t take lightly.

“Comcast collaborates with NASCAR and teams to replace our Xfinity branding with the names of military units from active military installations on all NASCAR Xfinity Series drivers’ windshield headers to commemorate Independence Day weekend,” Matt Lederer, Vice President for Brand Partnerships at Comcast, said. “Beyond the race track, our sustained commitment to veterans, military spouses and National Guard and reserve members begins with our workforce, to which we added more than 10,000 military community members to between 2015 and 2017.

“We’re now expanding on that achievement with a goal to hire an additional 11,000 veterans, military spouses and National Guard and reserve members, bringing our total to 21,000 military hires by the end of 2021.”

Overall, this takeover was a success by all standards.

“Philadelphia is a great race town and, each year, this event gets bigger and better than the year before,” Lederer mentioned. “We’re not surprised, as there are so many passionate race fans in this area. The Xfinity Philadelphia Takeover is the perfect way to entertain those hardcore fans while also introducing new people to the sport in our home city.”

Thank you to our friends @XfinityRacing for an amazing day in Philadelphia!

Shoutout to all the teams, drivers and @MonsterMile for making the 4th #XfinityTakeover a huge success.

No disrespect to current Cup and Truck Series entitlement sponsors, Monster and Gander Outdoors, but Xfinity has set the bar of what an entitlement sponsor should look like in NASCAR. It’s a major company that gives back to the community, but also puts on special events throughout the season while spotlighting its drivers as ambassadors. If I were you, I wouldn’t bet on seeing a “Monster Energy Takeover” or much of anything Monster-related that is more than just words. Comcast goes above and beyond what’s asked.

The Xfinity drivers feed off that method, which will help grow the drivers’ popularity, the series’ popularity and, hopefully, the popularity of NASCAR.

“What Xfinity does for this series, but just in general for the sport, is huge,” Allgaier stated. “I don’t know if they ever get the full credit for how much time and effort they put into this.”

Nope, they don’t, but it shouldn’t go unrecognized.