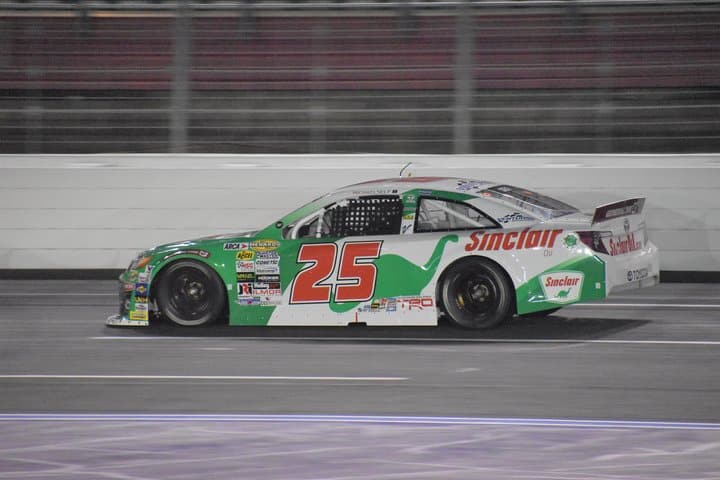 Michael Self was in a league of his own Thursday night (May 23) at Charlotte Motor Speedway. The Venturini Motorsports racer won the pole and led with ease for the first three-quarters of the race. Then, he tried a little too hard to get away from the field.

Self went into turn 1 a little too quickly and slid into the outside wall to draw a caution.  The Sinclair Oil Toyota had rear-end damage but was not hurt all that bad.  Regardless, Self felt that he had let everyone down.

“I’m just embarrassed,” Self told Frontstretch after the General Tire 150. “It was all my fault. The car was still a rocket ship, even with a little bit of an oil problem. I just made a mistake. I just got greedy and made a really bad mistake.”

Prior to the crash, Self had led every lap and at the halfway point, held a 12-second lead. However, his car also had a slight oiling issue that led it to smoke under caution. While it wasn’t good to look at, the car was still fine. Once back up to racing speeds, the smoke would disappear.

Despite the wall contact, Self chose to stay out during the caution that came out as a result of the contact.  Quite simply, the decision was made because the team believed that this was one of those “everyone will do what the leader doesn’t” situations.  Self felt that had he had pitted, everyone else would have stayed out.  In practice, he stayed out and everyone else pitted.

As a result, Self was a sitting duck on the subsequent restart, falling back as far as 10th. A couple of late cautions sent the race into overtime. Additional incidents that eliminated drivers such as Riley Herbst and Codie Rohrbaugh along with decent speed allowed Self to get back to a fifth-place finish.

Points-wise, the fifth-place finish did help Self in the point standings, something that he recognizes despite his embarrassment.  He expanded his lead from 25 to 55 points over Bret Holmes and Travis Braden.  Regardless, it will likely take a while for Self to live this race down.

This reminded me of J R Hildebrand hitting the wall while leading/winning the INDY 500.
Don’t let a lapped car ruined your race.