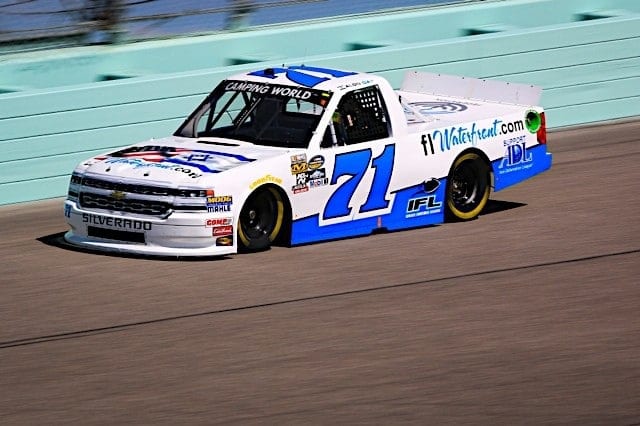 The list goes on and on. Max Papis. Jan Magnussen. Don’t forget Nelson Piquet Jr. or even Kenny Habul.

But what happened the road course ringer? Once one of the most exciting group of racers on the NASCAR schedule has all but disappeared, with entry lists on the Monster Energy NASCAR Cup Series level especially featuring less and less right-turn specialists who have a shot at competing.

There are a few reasons why. A combination of four-car limits for teams, plus a lack of sponsorship dollars that once accompanied the specialists who knew how to turn left and right better than any of the usual NASCAR drivers (along with, put simply, full-time drivers who are stronger on road courses than many of their predecessors), put an end to what was considered an art form in the sport.

However, one driver believes he can not only be the next great road course specialist, but also that others will follow suit if he’s successful.

“I can put it all together,” two-time Euro Whelen Series champion Alon Day tells Frontstretch. “Maybe I won’t be an oval guy, like the complete NASCAR driver, but I want to let people know that if I’m coming to road courses, I’m going to win. That’s what I want to establish.”

Day plans on competing in the three road course races on NASCAR’s premier series schedule this year. All he needs is some funding and he’s ready to get on a plane from Tel Aviv.

The Israeli racer has two prior Cup Series starts, one at Sonoma Raceway and the other at Richmond Raceway, both in mediocre equipment.

But this time around, Day believes that if he gets a chance to compete in another Cup contest, he can make a name as the next great road course specialist.

“I want to find good cars every time,” he says. “Road courses aren’t big in NASCAR like ovals, but people like it.”

Day has a point. What is stopping him—and others like him, for that matter—from getting a top-tier ride just three times a year?

Sponsorship is key. For a back-marker team, Day will need to raise anywhere from $50,000 to $100,000 for each race. The road courses, though, provide the unique opportunity for him to showcase his talent, just like he did in 2016, running extremely well in a MBM Motorsports Dodge during an Xfinity Series event.

At the Cup level, one strong run can generate enough attention to attract sponsors galore.

Besides Day, there are a handful of drivers who seek to return the days of road course ringers in NASCAR (or at least could be part of the group doing so), but many of them either have or have attempted to also make a splash on ovals.

So who could become the next great road course specialist, along with Day?

This guy made a name for himself by nearly beating Kevin Harvick in a K&N Pro Series West race at Sonoma Raceway in 2017. Now he has four road course wins to his name and is clearly the man to beat when the lower divisions make both right and left turns. The additional experience he has running ovals certainly won’t hurt as he works his way up.

The youngest Trans-Am champion in series history is slowly making a splash in NASCAR, including races in K&N in 2018. He also ran an Xfinity Series race in 2017, but parked it after 16 laps. If the right opportunity comes along, we can see this road course ace find his way into a solid ride.

The NTT IndyCar Series star has said for years that he wants to attempt a NASCAR race on a road course. Well, let’s see him do it already.

OK, how epic would it be to see the Indianapolis 500 champion compete in a NASCAR race?

If a Formula 1 driver were to attempt a NASCAR road course race, it would make sense for that racer to be one who competes for an American team. Haas F1 could certainly find a way to work with Stewart-Haas Racing and field a Cup Series entry for the F1 driver in at least one race.