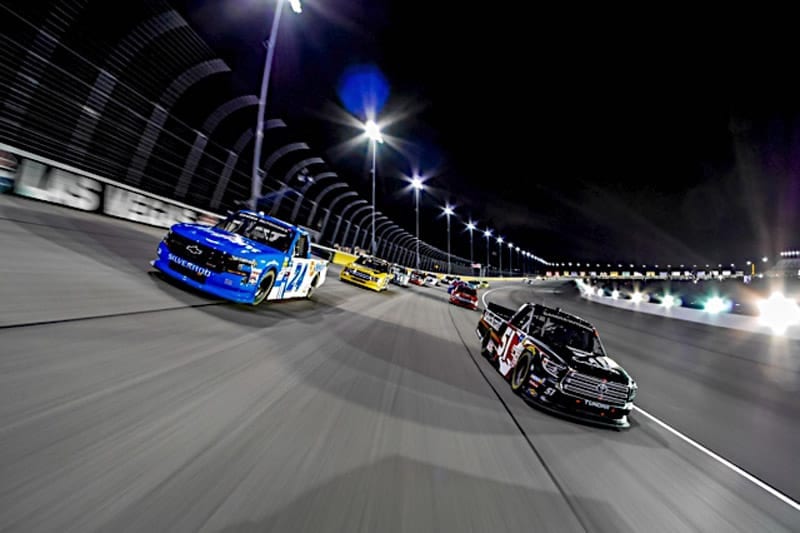 The drop of the checkered flag at Charlotte Motor Speedway last weekend for the Gander Outdoors Truck Series means that another couple of weekends off before they’re back on track. But what it also means is that the next time the series races, the Triple Truck Challenge, announced prior to the start of the season, will begin.

The money is the motive ?

Unlike the Dash 4 Cash, though, there is no qualifying for the bonus. Instead, it’s open to those who are already running for championship points in the series. Additionally, any driver who declared for Monster Energy NASCAR Cup or Xfinity series points will not be eligible to enter these events.

“It’s neat in the sense that it’s a little bit different,” said NASCAR’s Ben Kennedy, managing director of racing operations and international development. “It’s solely focused on the Truck Series drivers — you have to declare driver points in order to participate and then you’ve also got to win. It focuses on winning.”

The next three races, at Texas Motor Speedway, Iowa Speedway and WorldWide Technology Raceway at Gateway, will have more meaning to each team on the track.

“Putting half a million dollars on the line is certainly a big number for any team, let alone a Truck Series team,” Kennedy continued. “I think anytime you can shake it up, especially in the summer and especially at stand-alone tracks, it’s big.

“We learned on the Xfinity side that running consecutively really helps build that energy and excitement. You don’t forget about it; it’s fresh on your mind.”

Up first is Texas Motor Speedway on Friday, June 7. Often overshadowed by the IndyCar Series on this race weekend, the added $50,000 bonus should increase the excitement that follows the series, despite the rest of NASCAR being halfway across the United States at the time.

“What better place could there be to ask drivers to put it all on the line than at No Limits, Texas?” Texas Motor Speedway President/GM Eddie Gossage said. “To lay an extra $50,000 out there for these drivers to fight over further enhances what’s always the perfect opening event to our summer race weekend.”

Johnny Sauter is the winningest active driver at TMS with five trips to Victory Lane, three of which have come in the last six events at the mile-and-a-half oval. He’s finished outside the top 10 just five times in 22 starts and boasts an impressive 6.1 average finish.

His ThorSport Racing teammates, Grant Enfinger and Matt Crafton, aren’t too shabby at the track either. Enfinger has four top 10s in five races, while Crafton boasts two wins and 26 top 10s in 37 starts.

Meanwhile, Stewart Friesen, who’s been so close to finding victory lane this season only to have something stop his run every time, has been pretty impressive at Texas too. Though he crashed out of his first start at the track, his three most recent finishes are second, eighth and second.

Those runner-up finishes? He was right on Sauter’s bumper for the final couple of laps last summer but couldn’t beat the blocks thrown, and Kyle Busch dominated the race in March.

Iowa Speedway is put in a unique position as the second race in the Triple because whoever wins at Texas will need to back that up the following weekend to be eligible for the $300,000 bonus at the end.

“This new format is tailor-made for Iowa Speedway, and it is sure to add a new level of intrigue to Wide Opening Weekend,” Iowa Speedway President David Hyatt said. “As the pivotal race in The Trip, our fans are going to see some of the best racing the NASCAR Gander Outdoors Truck Series has to offer.

“This may shape up to be the most competitive truck race ever at Iowa Speedway.”

Iowa has hosted just 12 Truck Series races, and Brett Moffitt and Crafton are the only previous winners at the track. In fact, Moffitt scored the victory in his only start at the facility for Hattori Racing Enterprises last season during his championship run. He led a race-high 76 laps and combined with Friesen and Harrison Burton to hold the top spot for a 154 of 200 circuits.

Crafton and 2017 winner John Hunter Nemechek were the only other drivers to lead double-digit laps on the day in that race, but both were taken out in a crash that was triggered by Crafton.

Obviously, Moffitt and Crafton should be on the list of drivers to pay attention to, but you can also include Burton in that mix. If he hasn’t won before the series makes it to Iowa, Burton already has prior experience at the track, giving him an edge over the rest of the rookie competition.

Last up in the Triple Truck Challenge is the trip to the newly re-branded WorldWide Technology Raceway at Gateway.

“This new program for the series illustrates that NASCAR is adding more excitement for the fans and providing promoters with additional storylines to add even more drama to our events,” Gateway Motorsports Park executive vice president and general manager Chris Blair told the St. Louis Post-Dispatch. “We worked closely with series general manager Ben Kennedy and his team, bouncing ideas off each another, on how we can make our races even more exciting in the early development stages of the Triple Truck Challenge. To see this program come together shows the willingness of NASCAR to work with the tracks for the benefit of both the teams and the fans.”

Interestingly, Sauter has a pretty solid record at the Missouri track with seven top fives in seven races, even though he has yet to find victory lane there. With an impressive 3.1 average finish that leads active Truck Series drivers at Gateway, it’s easy to point toward him as one to watch, despite having only led 29 of the 1,122 laps he’s run.

But if you consider that the six most recent winners at the track have moved on to the Xfinity or Cup series, it’s truly up in the air about who could win the final race in the Triple. In fact, there’s not a single previous victor at Gateway expected to be in the field, and at a track that’s created some pretty intense moments with an additional monetary incentive, you’ve got a recipe for an exciting race where the winner may not be evident until they take the checkered flag.

The likelihood that the same driver will win all three races is slim-to-none with how competitive the series is, but you can bet that each one of those competitors will fight tooth and nail for their shot at the bonus. And that can only bode well for the series that already puts on some of the best racing in the sport right now.