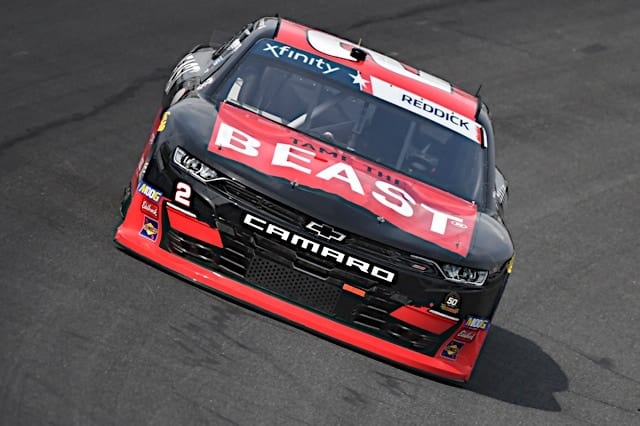 The Xfinity Series will race in the heat of the day this weekend.  As a result, being good in the hot sun Thursday afternoon (May 23) is crucial.  Richard Childress Racing’s Tyler Reddick was fastest overall with a lap at 180.536 mph.

In the first practice, Reddick was quick as soon as he left the garage.  On his first lap on the track, Reddick turned in a lap at exactly 180 mph for an average speed.  That lap held up for the entire 50-minute session.

Reddick’s lap was eight-hundredths of a second faster than Stewart-Haas Racing’s Cole Custer.  Team Penske’s Austin Cindric was third in the PPG Ford, while Austin Dillon was fourth in Kaulig Racing’s No. 10.  GMS Racing’s John Hunter Nemechek was fifth.

JD Motorsports with Gary Keller’s Ross Chastain was a strong sixth, while Justin Haley was seventh.  JR Motorsports teammates Justin Allgaier and Jeb Burton were eighth and ninth, while Christopher Bell was 10th.

Bell managed to find trouble before exiting the garage.  In order to exit the garage from the south side, drivers must go to the far end to go around the building, then go down the north side of the garage before exiting onto pit road.  On the far end is a slightly raised manhole cover, which Bell struck while trying to exit the garage at the beginning of the session, breaking his splitter.  The Joe Gibbs Racing crew had to replace the splitter before Bell could go onto the track.

There was one caution during the session due to a crash for Mason Diaz in the Brandonbilt Motorsports No. 86 Chevrolet.  Diaz lost control exiting turn 2 and spun down onto the apron before scuffing the inside wall with the driver’s side.  The Brandonbilt team made repairs to the No. 86 in time for Diaz to get back out during the next session.

Eight of the drivers entered completed a run of 10 laps or more during the session.  Of those eight, Allgaier was quickest with an average speed of 176.695 mph over the first 10 laps he was on the track.  That pace was roughly one-hundredth of a second faster than Custer, while Briscoe was third.

Speeds were down for much of the afternoon session as teams worked on race setups.  However, Reddick was able to put down the fastest lap of the day to top the chart.

Gragson was sixth, then Allgaier and Briscoe.  Landon Cassill, driving the Shepherd Motor Ventures No. 89, was ninth fastest, while Ryan Sieg was 10th.

During the session, FOX Sports 1 explained that Shepherd wants his team to be able to step things up.  To that end, he’s gotten some setup assistance from GMS Racing, which resulted in a radically different No. 89 Chevrolet.  Cassill was tapped to put the car through the rounds in both sessions Thursday.  The pace is not a fluke; Cassill was 14th fastest in the first session.

19 of the 37 drivers that set times in the session completed runs of 10 laps or more.  Of those 19, Reddick was fastest with an average speed of 178.235 mph.  The fastest lap of the day was part of that run.  In single-lap pace, Reddick’s 10-lap average would have been good enough for fifth on the chart.  The average speed was nearly a quarter of a second per lap faster than Bell.  Custer was third, followed by Brandon Jones and Sieg.

Xfinity Series teams will be back on track early Saturday morning for qualifying at 9:30 a.m. ET.  The session will air live on FOX Sports 1.