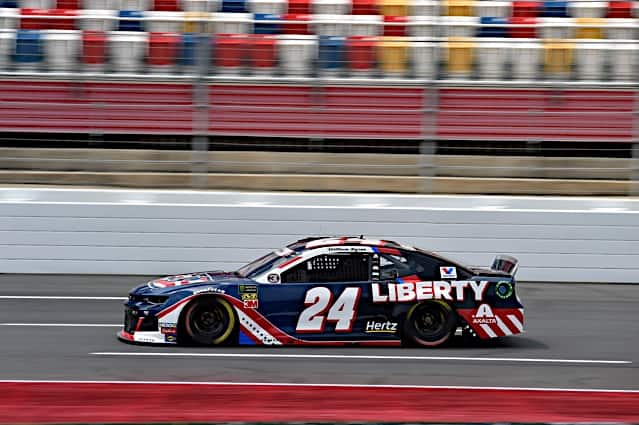 Hendrick Motorsports continued its recent strong form Thursday evening (May 23) when William Byron won the pole for Sunday’s Coca-Cola 600 with a lap of 183.424 mph.  It is the second pole of the season for the young racer who grew up at Charlotte and got his start on the quarter-mile.

“[Winning the pole] means a lot to me,” Bryon said afterward.  “To win the pole is a good first step for the weekend, but just being here and sitting in [the media center] while racing here at the Summer Shootout, Winter Heat and all those races, you think about what it’d be like to go race on the big track, let alone win something at it.”

With the new rules in play, Byron’s pole speed is more than 8 mph slower than last year.  It is the slowest pole speed at Charlotte Motor Speedway since 1998, when Cup teams had to contend with the 5-and-5 rule (5-inch-tall rear spoiler and a minimum height of 5 inches on the front air dam).

Byron’s lap was six-hundredths of a second faster than Stewart-Haas Racing’s Aric Almirola, who has his best qualifying effort of the season.  Joe Gibbs Racing’s Kyle Busch will start third, followed by Richard Childress Racing’s Austin Dillon.  Kevin Harvick will start fifth after struggling in practice earlier in the day.

Daniel Suarez was sixth, followed by Team Penske’s Joey Logano.  Clint Bowyer put all four Stewart-Haas Fords in the top 10 with an eighth-place qualifying effort.  Ricky Stenhouse Jr. and Daniel Hemric, who was fastest in practice, round out the top 10.

Due to a number of pre-race inspection failures a couple of weeks ago at Kansas Speedway, quite a few big names were forced to go early in qualifying. Chase Elliott was forced to go early and ended up 12th.  Teammate Jimmie Johnson will start 15th.  Kyle Larson, who won the Monster Energy All-Star Race Saturday night, will start a disappointing 25th.

Monster Energy NASCAR Cup Series teams will be back on track bright and early Saturday morning for two practice sessions.  The first of them is scheduled to start at 8:30 a.m., while the second is at 11:05.

8 mph slower….hahahahahahahaha….and to think they held it wide open the entire lap….really curious how this race goes as this is the track that made this package exist, let us hope for a cool night so this package can put on a show.

I’m starting to see what the trolls are talking about. Is this really competitive racing or race cars with all kinds of rules and restrictions applied each week so the slower brand can catch up? After sixty plus years of watching, I’m losing interest.
Even though every team can buy the same equipment over the counter, short track sprint car racing is the most pure competitive racing.