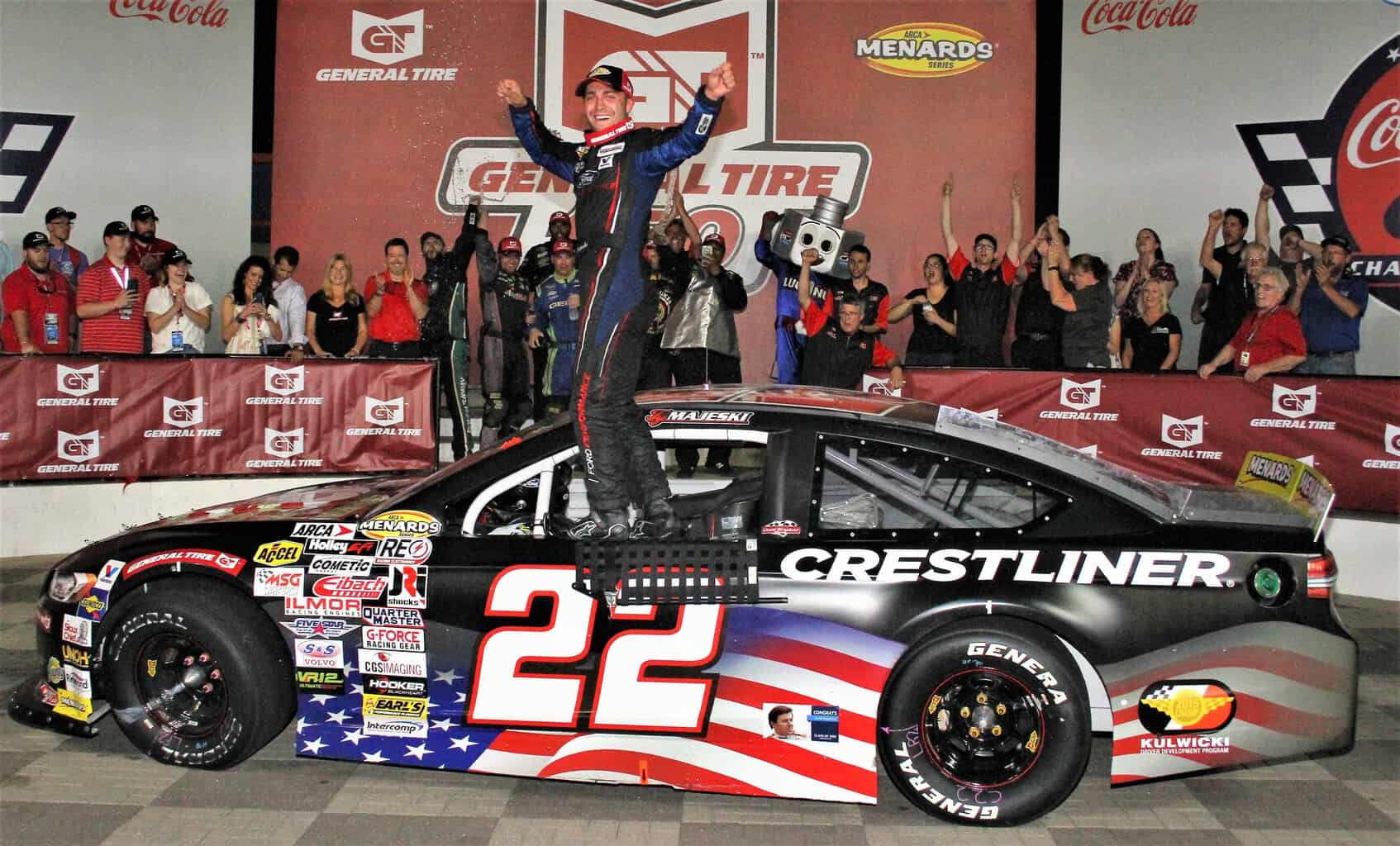 Michael Self proved absolutely untouchable for nearly the entirety of Thursday’s General Tire 150, until, in the words of the driver himself, “he got greedy.” After leading the first 84 laps, Self got out of shape in turn 1 and slapped the wall, holding the race lead but bringing out the yellow flag. The ensuing pit stops saw the No. 25 car stay on pit road while all the leaders came in for tires, leaving Self vulnerable on the ensuing lap 91 restart.

Bret Holmes capitalized on a two-tire stop to take the lead briefly, but it would be Ty Majeski who would take the lead for good on four tires, weathering two overtime restarts to score his first career ARCA Menard’s Series win, holding off Gander Outdoor Truck Series regulars Sheldon Creed, Gus Dean and Harrison Burton. Majeski’s win came in a Ford Fusion, making him the first driver to win an ARCA race in 2019 without driving a Toyota Camry (FOX also noted on the broadcast that sponsor Crestliner Boats literally came on the car in the last 24 hours).

The curse of the points leaders continued to impact the ARCA field at Charlotte. Christian Eckes battled back to finish seventh after a lap 5 incident that saw him cut a tire and slap the turn 4 wall. Holmes faded to eighth in the final running order, as his two tires were unable to keep up through two restarts. Travis Braden finished ninth but was never in contention, also getting involved in a late-race incident that saw Codie Rohrbaugh wreck in the first overtime attempt. Leaving Charlotte, the top four drivers (Self, Braden, Holmes and Eckes) are all within 120 markers of each other.

Majeski’s in a hard spot being a Ford driver right now. None of Ford’s Cup operations have a significant Truck presence, while the inn is full in Xfinity competition at both Stewart-Haas Racing and Team Penske. All Majeski can do is win baby win, and he did just that in Charlotte Thursday. Despite being a sporadic starter in recent months, Majeski still got the best of a number of Truck Series regulars to score the trophy, showing form that Chad Bryant Racing hasn’t often displayed since its Cunningham Motorsports days. Most importantly, Ford has now broken Toyota’s stranglehold on the ARCA ranks and broken into the win column; it took the Blue Oval brigade till August last year to do that.

A sixth place finish wasn’t representative of how well NHRA-transplant Tanner Gray ran on Thursday night. Gray on several occasions used the high side to perfection to make passes inside the top five, including on Truck Series regular Burton, only to have lap traffic interfere with closing the pass. Despite those challenges, Gray never got in over his head and continued a red hot month of May that saw him score his first career East Series win at South Boston.

Having chronicled how a few drivers gave the Truck Series regulars in the ARCA field all they could handle, those same regulars were a fixture in the top five for the entirety of Thursday’s race. Though Burton experienced handling woes throughout the event (Tweeted in detail by his mother from the pit box), he still managed to bring home the No. 20 car fourth. Dean brought Win-Tron Racing’s No. 32 home third and gave Majeski all he could handle on the race’s final restart. And then there was defending series champion Creed, who had perhaps the only car in the field that was able to match Self’s pace in the opening 85 laps, finishing second. Had Creed not incurred a pit road speeding penalty under the lap 85 yellow, he may well have put the No. 21 in victory lane.

It wasn’t all good for Creed in his return to the ARCA ranks though. The lap 98 yellow that forced Thursday’s race into overtime came courtesy of his bumper when Creed turned Riley Herbst’s Toyota into the backstretch wall while racing for position. Though Herbst cast no blame on Creed in post-race remarks, calling it a “racing incident,” there was absolutely no lane for Creed to make the high-side move he appeared to try getting around Herbst. A definite lapse in judgment for a driver that showed few of this in this series a year ago.

As for Herbst, I’m not supposed to play favorites, but I was gut-wrenched to see the No. 18 get wrecked in the closing laps. After coming on strong late in the Charlotte race for the second year in a row, Herbst got tagged in an incident not of his making on lap 98, leaving his team with a wrecked race car and still winless in 2019. That mighty Joe Gibbs Racing hasn’t scored any ARCA trophies isn’t what got to me though, it’s wanting to see Herbst get a redemption moment this season after being utterly maligned by many in the racing community, and especially the media, for a viral exchange that saw the Twitterverse tide turn on him at Bristol. That’s not to say that Herbst wasn’t correct in his post-race remarks about coming up short in the cockpit Thursday. That he was unable to take the race lead in a Joe Gibbs Racing Toyota on four tires racing Holmes on two tires is a failure. But the much-maligned Herbst was mature enough to admit that on this night:

Still pulling for this kid to score a trophy this season.

Chad Bryant Racing had a bipolar evening; while Majeski pulled into victory lane, full-time competitor Joe Graf, Jr. never appeared to be at full pace on Thursday evening. The team reported a potential engine issue for the No. 77 team within the first 20 laps of the race after a rough restart on lap 11, issues that were compounded on the lap 21 restart when Graf was penalized with changing lanes on the start before reaching the line. Forced to pit under green, Graf never recovered and finished outside the top 10, three laps down.

Another driver who was surprisingly invisible this Thursday was former ARCA race winner Brandon McReynolds. Despite driving the same No. 28 that’s proven stout on the short tracks with Carson Hocevar this season, McReynolds never was a factor in Thursday’s race before retiring prematurely with a rear end failure.

ALLAWAY: MICHAEL SELF EMBARRASSED WITH SELF AFTER UNFORCED ERROR

Though at race’s end Self still built onto his points lead over the rest of ARCA’s full-time championship drivers, his self-induced spin while leading on lap 85 cost the No. 25 team a sure-fire win, and derailed what was arguably the most dominant performance an ARCA race has seen since David Stremme lapped the field at Michigan back in 2006. There’s not a points leader in the ARCA ranks in 2019 that’s yet shown how to turn the knife once they’ve stabbed.

It was ugly enough that Con Nicolopoulos had his incident Thursday night spinning on pit road and making contact with the pit wall. But that he hit pit wall as hard as he did, and damaged both the front and rear of his car, is nothing short of disastrous for the lowest of low budgets Wayne Peterson Racing team. While there were some in the viewing audience that were unhappy about a driver wrecking on pit road and the speed disparity with numerous of the lapped cars in the field, I’m taking the angle that it was unfortunate to see a team that has made an effort to actually race despite their limited resources suffer such a wreck. Keep an eye on the No. 06 car at Pocono this coming week…this will the poster child case of just how much easier the composite body has made repairing cars for budget-minded ARCA teams.

Thursday’s race at Charlotte left the same taste in my mouth as March’s Cup race at Bristol did…an on-track product that, while definitely a show worth watching, was soured at the conclusion by poor officiating.

Despite Self’s utter dominance up front for the first 85 laps of Sunday’s race, there was still plenty worth watching. The ARCA cars were visibly getting out shape, especially in turn 4, while drivers throughout the field were able to race side-by-side without 10-story tall spoilers. Considering that, it would have been a show worth watching to see if Creed and Herbst could have run down Self after he hit the wall on lap 85 and saved his car. One thing’s for sure, ARCA got trigger happy throwing the yellow for his incident:

That is a B.S. Yellow

No reason to put it out for that I mean come the hell on he saved it.

This race is a joke now#ARCA

Throwing that yellow flag completely changed the course of the race. It left Self vulnerable to pit strategy; staying out, every other lead lap car came in for tires. The caution literally cost Self the win…and though Self brought it out with a self-induced mistake, that doesn’t mean it’s on the officials to twist the knife.

The officiating didn’t get better in overtime. After the first overtime restart, it was obvious even to the naked eye that Rohrbaugh’s wrecked car was going to stop on the backstretch in the middle of the racing groove. Despite that, ARCA waited until the field had taken the white flag on the frontstretch – more than half a lap – before throwing the caution flag. And as I tweeted, while 99% of the time I support ARCA, or any racing series, doing everything in their power to avoid throwing the caution flag, it was 100% obvious in this case that the caution would have to come out. There was no reason, be it for competitive reasons, safety or otherwise, to wait as long as they did to throw the flag. It’s too bad to see ARCA racing in NASCAR’s back yard and suddenly officiating like NASCAR would. Just ask an ARCA competitor:

ARCA must have been sitting there debating the overtime rule #ARCA

But, since Thursday’s race was a good one, let’s end with a positive… and some constructive feedback. ARCA’s decision not to force Self to pit from the lead despite his car smoking under yellow under each caution in the second half of the race despite Creed’s reports of a potential fluid leak was absolutely the right call. After all, despite a lack of evidence (it was obvious from the lap 58 restart that the No. 25 wasn’t dropping fluid), the crew chief for Self’s team had a rock-solid rationale for the smoke.

Having said that, ARCA’s long been known for its short track shows, so why not steal a page from that book the next time something like this happens?

At short tracks, you'll see an official stop a smoking car and check for trailing fluid. If there's none and no danger relevant, they can re-take their position. That'd be an easy solution for #arca officials tonight.#ARCARacing #ARCANightInAMerica #GeneralTire150