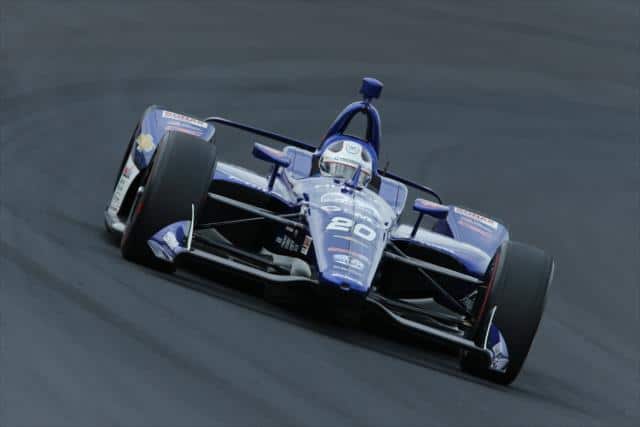 For the past seven years, Ed Carpenter has proved he can get the job done in qualifying for the Indianapolis 500. This year, he believes he can add his mug to the Borg-Warner Trophy, sipping on some milk in victory lane.

Carpenter, 38, will be starting the Indy 500 (Sunday, May 26) from the middle of the first row. It marks the fifth time in the past seven years that the Indianapolis native has started the event from the front of the field, three of which were pole runs.

But Carpenter’s teammates, the cars he owns, Spencer Pigot and Ed Jones, start third and fourth, meaning the company as a whole, has brought speed to the Greatest Spectacle in Racing.

“I’m really proud of the effort of the whole program,” Carpenter told Frontstretch on Thursday (May 23). “As a group, I think we’ve worked really well together and that’s a big part of the reason as to why we’re starting second, third and fourth.”

Carpenter admits, that like NASCAR, teammates are a big part of being successful in the Indy 500. When it comes to Ed Carpenter Racing, everything is an “open book.”

However, he’s coming off a year in which he led a career-high 65 laps in the Indy 500 after starting the event from the pole. Ultimately, Will Power edged the No. 20 car to the checkered flag, though Carpenter picked up his best finish at the track (second) and best finish in IndyCar since 2015 at Iowa Speedway (sixth).

“They’re all tough, but finishing second is just as hard as having a DNF when you make a stupid mistake, even though you didn’t do anything wrong,” Carpenter added. “Just being that close to winning the race makes the defeat that much harder than if you run fifth, 10th or whatever. When you feel like you have a car that can win the race and you aren’t able to do it, it makes for a disappointing feeling.”

The Indy 500 will be the first time Carpenter buckles up for race conditions since Gateway last August. But he doesn’t believe that will be a disadvantage for his chance at a victory, as it’s the first race for IndyCar on an oval this year.

In the five combined practice sessions, Carpenter has been among the top 15 in all of them, the lowest being 15th on Monday (May 20). The highest he’s been on the scoring pylon in race trim was third in the opening practice (Tuesday, May 14), surrounded by Team Penske (Power first, Simon Pagenaud second, Helio Castroneves fourth).

Because of the speed, Carpenter’s confidence is high heading into the race.

“I feel really strong,” Carpenter said. “I feel really good about the work we’ve done all month long. This past Monday, our last full practice session, I thought we had a really good day. I have a lot of confidence in the car and what it can do and hopefully that means we’ll have a successful 500 miles.”

But is it Carpenter’s best shot of winning at Indy?

“We’re certainly positioned well,” he mentioned. “We’ve had great opportunities in the past, but I definitely feel confident, if not more confident than I have in the past. At the end of the day that doesn’t really mean a whole lot until you get out there and do it.

“It’s always disappointing when you don’t win this race because that’s the only goal when we come here. I don’t know that it would be any more disappointing than it would be last year, but hopefully we all have a successful day and one of us [he or teammates] wins the race.”

In 15 Indy 500 starts, Carpenter has an average finish of 16.2 with four top-10 efforts (though he does have four 11th-place finishes). Three of the past five races at the hallowed grounds have resulted in DNFs due to crashes or mechanical failures.

But the speed ECR has shown in the month of May is assurance for Carpenter, believing he can win the race.

“I feel really good with my car, feel really comfortable inside of it,” he added. “I feel like we have everything we need to go out and win the race. We’ve got to go execute and keep doing the things we’ve been doing and working towards and put it all together.”