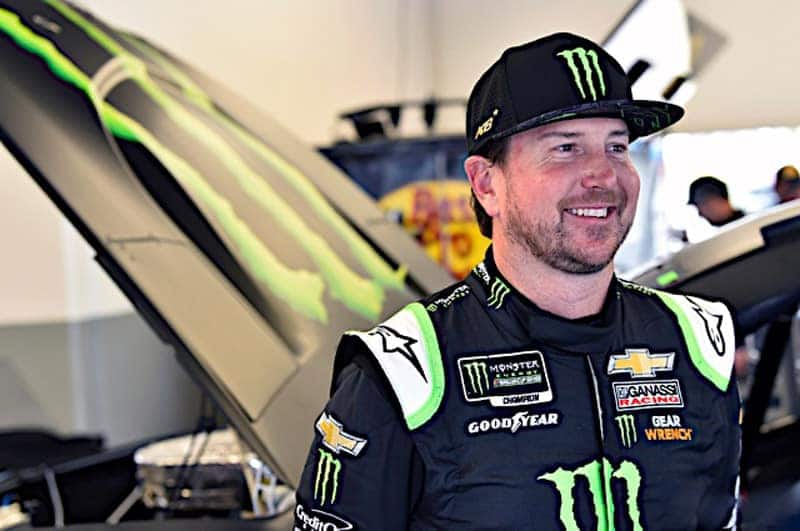 After a thrilling All-Star Race, drivers in the Monster Energy NASCAR Cup Series will compete in the longest race of the year Sunday (May 26, 6 p.m. ET, FOX). Memorial Day weekend is truly one of the greatest times in motorsports.

At Charlotte Motor Speedway, the vehicles will use the lower horsepower package with aero ducts. There will be four stages of 100 laps each instead of the usual three. Ideally, you will want drivers who start near the front of the field, so you can earn bonus DraftKings points for laps led. However, if a driver who starts in the teens or 20s shows speed in Saturday’s practices, you may wish to plug him in your lineup. Bonus points for fastest laps as well as place differential points will also be in play.

As always, you can use the picks below to create your own DraftKings roster. Remember to check on Sunday in case you need to adjust your line after inspection.

Kyle Busch won this race last year after leading 377 laps. Overall, Busch led 1370 laps across 29 races at Charlotte. Since he qualified third for Sunday’s race, he is in a great position to lead even more laps. The Joe Gibbs Racing driver can also earn you bonus points for fastest laps.

So far in 2019, Busch has three wins, six top fives and 11 top 10s across 12 races. Even though he finished the Kansas race 30th, his average finish is still 7.1. Martin Truex Jr. (Busch’s JGR teammate) also led many laps recently in this race if you need to save salary. In fact, in 2016 Truex led 392 laps in truly dominant fashion. Both drivers are certainly viable options for your DraftKings roster.

Kevin Harvick looked freaky fast in his pink millennial Ford last week. Unfortunately, a slow pit stop cost him big money. This week the Stewart-Haas Racing driver is determined to speed to the front early and often. He is in prime position to do so because he qualified for this race fifth. I’m not sure what the team did to find this speed since he was 27th in first practice on Thursday.

Harvick won at Charlotte three times, including the 2011 and 2013 Coca Cola 600. He knows how to win here, even if he doesn’t lead as many laps. His other SHR cohorts Clint Bowyer and Aric Almirola are also candidates to perform well and help you score above the cash line.

Chase Elliott appeared to be more of a tournament play at his price, but all the Hendrick Motorsports drivers have done well as of late. Elliott was second in first practice, but qualified 12th. Perhaps the team is focused on the end goal: to be victorious. As noted, Elliott does have two top 10s at this track. His teammate William Byron earned the pole and can earn you bonus points for laps led. Jimmie Johnson won this race in 2014 but hasn’t shown as much speed as his younger comrades. Both drivers (as well as Alex Bowman) are inexpensive alternatives to Elliott, should you choose to use them.

Kurt Busch is probably a driver I would lock in. First, he’s fairly cheap and can save you some salary. Second, Busch has excellent recent track history, finishing outside the top 10 once since 2015. Finally, he is the only driver to finish in the top 10 at all 1.5-mile tracks this year. He hasn’t been as fast as he was at Texas, but he does have the potential to do well here.

You could also use his Chip Ganassi Racing teammate Kyle Larson in your lineup. Larson won the All-Star Race last week, and his DraftKings points have been in the 50s and 60s since Dover. Since he qualified 25th, he can earn many points if he finishes in the top 10.

Kyle Busch’s young JGR teammate, Erik Jones, doesn’t have as much Cup experience here, but he did finish seventh two years ago in this race. I chose Jones mainly because of his 2019 performance at the 1.5-mile tracks. He finished third at Kansas and fourth at Texas and earned more than 50 DraftKings points. In fact, three of the past four races (except All-Star) he earned at least 50 DraftKings points. Could this be the race where he joins his fellow teammates with a victory? Possibly.

Although Buescher has a limited history at Charlotte, he could still be a good salary saver for your roster. In three of the five races at this track, the JTG Daugherty Racing driver finished ahead of where he started. Considering that he starts Sunday’s race 22nd, he again has the capacity to earn you positive place differential points. Perhaps his 10th-place finish at Kansas can be a momentum-builder for the team.

Hemric is my Dark Horse Performer due to his risk and no prior Cup history at Charlotte. After finishing first practice in first, Hemric qualified tenth. In most of the 2019 races where he started in the top 15, he finished much further back. He does have a good record in the Xfinity Series, though it’s a small sample size. Since it is such a long race, perhaps he could finish well, as long as he can keep up the pace. His Richard Childress Racing teammate Austin Dillon won this race two years ago thanks to a good pit strategy. Either driver can be useful to your lineup, as long as you acknowledge the risk.

Hope you have a safe and happy holiday!