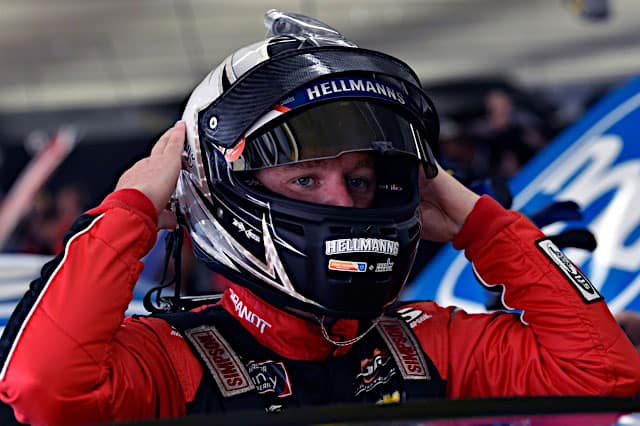 Justin Allgaier is off to a comparatively slow start in 2019 coming off a career year in 2018 in which he won five times and led more than 700 laps. The driver of the JR Motorsports No. 7 Hellman’s Mayonnaise Chevrolet has yet to win this season but posted a season-best second-place result on Saturday at Charlotte Motor Speedway.

Overall, the results have been improving at JRM, whose lone 2019 win came in Daytona with Michael Annett. In addition to Allgaier’s second-place run in the Alsco 300, teammates Noah Gragson finished fourth, Annett sixth and Jeb Burton seventh.

Allgaier said that his biggest battle Saturday was handling.

“My biggest issue was in [turns] 1 and 2; we were really good in 3 and 4 on the bottom,” Allgaier said after the race. “[Tyler Reddick] was giving up quite a bit of time on the top, but he could roll with so much speed through 1 and 2 on the top, and my car was too tight.

“I hit the fence early trying to push it, and we just could never get the balance where I wanted it. You know, it’s disappointing, but at the end of the day, Tyler had the best car. When they would get back in traffic, they would be the only ones to come back and pass traffic.”

Allgaier says that his JR Motorsports team is working to change their fortunes, though. They’ve had speed this season, but he says that it’s been just a little lacking recently, though the results are improving despite that. He credits his recent momentum to his crew and their ability to think on the fly.

The good news for Allgaier is that as the summer heats up and the racetracks become hot and slippery, he’s at his best and so is the No. 7 team.

“The summer months, when it’s hot and slick like this, that’s when I feel like myself, personally, but also JR Motorsports itself [are at our best], so I’m really looking forward to summer,” Allgaier said Saturday, adding that while several drivers struggled with temperatures that approached 140 degrees inside the racecars, he felt strong and focused. “I’m not going to say I could go run the Boston Marathon like Jimmie [Johnson], but I could probably jog to the motorhome right now. I really wasn’t that bad.

“There was a point with about 40 to go where the sun came back out and it got really humid, and that was a little bit too hot for me, but I feel good and felt like I was hydrated well and did all the things I needed to do in the car. So that’s a good thing; driver didn’t fall out of the seat. As long as that doesn’t happen, life is good.”

What does the driver feel is his advantage in the summer heat? The answer is twofold.

“I may be short, but I’m not the littlest guy out there. I have a little fat to burn off while racing,” he said. “I think the other part of it is my dirt background. Racing on dirt growing up and being able to have that car control and the cars not being locked into the racetrack. I think sometimes what we battle is the aero game. There are little details that I feel like some of the other competitors may have a little bit better aero, but we have to maximize our cars.”

Allgaier said that JR Motorsports as a whole is on the upswing, and it couldn’t be happening at a better time. He says they aren’t quite where they need to be, but a win is getting closer. He points out that taking home four of the top seven spots in the race is quite an accomplishment in itself, and the team isn’t going to be satisfied with second for long.

“As they all started crashing there toward the end, I thought we were going to win one by default there. I think [a win] is a possibility. We’ve got to get a little better, no question. Our team and everybody at JR Motorsports, we’re working hard. I think you saw today with the 9 the 1 and the 8 all running up front. All four of us in the top seven — that’s more difficult than I can even explain to you how hard that is to put four cars in the top seven. I’m really proud of this team; we’ll keep digging.”