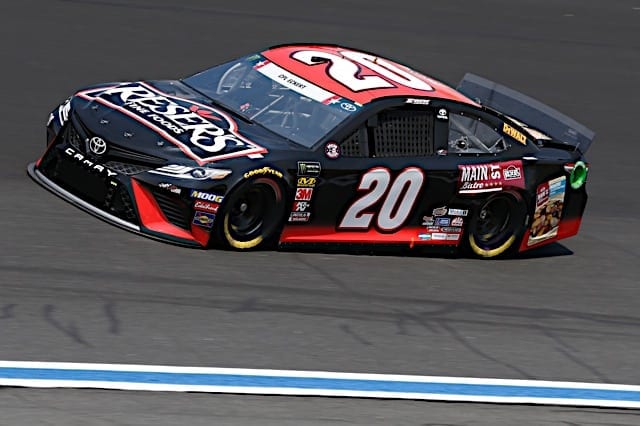 Toyota had shown significant pace all weekend at Charlotte Motor Speedway, and both Kyle Busch and Denny Hamlin led laps early in the Coca-Cola 600. However, tire issues have plagued the manufacturer, as four of the six Toyotas entered have had failures in the first half of the race.

The first to have problems was Erik Jones, who blew a right front tire and hit the wall in turn 4 on lap 23.

“We just blew a right-front. There was no real warning. It’s unfortunate,” Jones said after he was released from the infield care center. “I don’t know if we ran something over. It’s a bummer, you don’t want to be out of the 600 this early and we had a car that could have contended today. Just have to go back to work and go get them next week.”

Goodyear determined that Jones had a puncture in his right-front tire that caused him to crash.

Shortly afterward, Leavine Family Racing’s Matt DiBenedetto blew his right front tire and hit the wall in turn 1. Goodyear officials noted that this failure was caused by overloading the tire. DiBenedetto was OK, but the car was significantly damaged, bursting into flames similar to how Christopher Bell’s Toyota did during Saturday’s Alsco300. That crash ended DiBenedetto’s night.

Even being at the very front of the field hasn’t shielded anyone from trouble. Martin Truex Jr. was leading the race on lap 73 when he had his right-front tire go down due to overload. That put Truex into the outside wall exiting turn 4. The damage was not all that severe to the Bass Pro Shops No. 19, allowing the crew to make repairs and get Truex back on track. He was then able to charge up from 32nd to score two points at the end of stage one.

Hamlin led 21 laps early on in the race, but even he wasn’t immune to overloading his tires. Hamlin had a right-front tire go down on lap 161, sending the FedEx Toyota into the turn 1 wall. Similar to Truex, the No. 11 team was able to make repairs and continue, but he has not been able to recover as well as Truex.

As of the halfway point, Kyle Busch is the only Joe Gibbs Racing driver to not blow a right front tire in the race. Truex and Hamlin have managed to stay on the lead lap, while Jones is out.