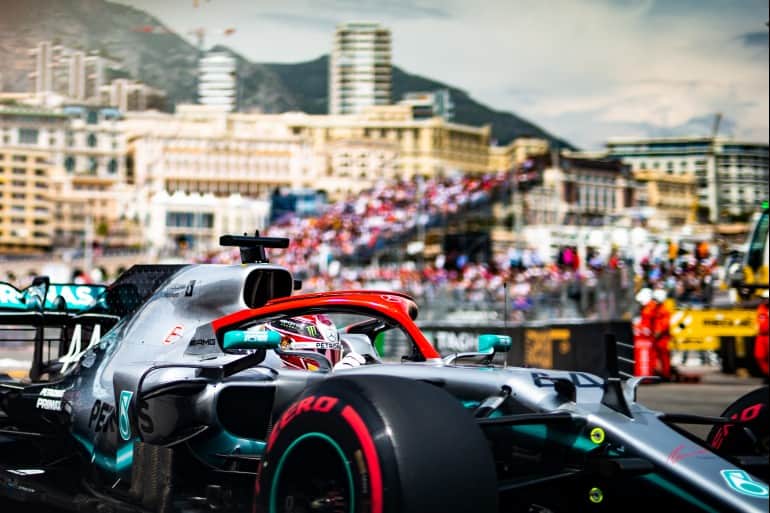 Lewis Hamilton used his pole starting position to beat teammate Valtteri Bottas and Red Bull driver Max Verstappen to the first turn, then followed the one-stop strategy to hold on with medium compound tyres to earn his third Monaco Grand Prix.  Verstappen crossed the finish in second but was relegated to fourth, leaving Ferrari’s Sebastian Vettel to move onto the second step of the podium with Bottas taking third.

The race ran with reminders of Niki Lauda’s passing this week, as teams memorialized the former champion with decals on their cars and drivers with bright red hats with the name Niki emblazoned in white in all capital letters.  Lauda, who once retired after stating that he was bored with the sport left his impact on many throughout the paddock but even they might have acknowledged that the race was not the most enthralling Monaco GP of all time they would have to argue against any notions that it was boring.

The race got a clean start with all cars making it through the tight turns on the streets of Monaco with a certain amount of care.  Hamilton was able to get away from everyone and hold a gap over Bottas within the first couple laps. The action all came in the pack, especially with a charging Charles Leclerc coming from his 16th spot.  Leclerc made a darting move to the inside on a right-hander and clipped the rear wheel in trying to pass Daniel Ricciardo. In doing so, he punctured the tyre and drove the track with the tyre unraveling and damaging the underside of his car.

Leclerc was trying to make up for Ferrari’s botched qualifying strategy that failed to get him out of Q3 when they misjudged the time he had set.  Starting in the rear was sure to frustrate the young first-year Ferrari driver and that aspect eventually showed in his ill-fated pass attempt.

Though his injured car spraying debris brought out a safety-car and allowed Leclerc to earn his lap back, Leclerc never recovered.  Eventually, the team brought in his weakened car and shut him down for the race. While it looked as though Leclerc could have continued it is possible that Ferrari saw no real opportunity for Leclerc to move into the points and thought it better to save his engine for another race.

The safety-car was the one moment that brought an overall strategic complexity to the race.  Though a threat of rain loomed over the track it never made an appearance. It was the caution period when teams pitted en masse, with Mercedes making an unusual tactical mistake.  The Silver Arrows stacked their drivers and Bottas had to fight Verstappen in getting out of the pits. The ensuing tussle injured Bottas’ car and brought him back into the pits, which then put him in fourth.

Verstappen, however, earned a five-second penalty for an unsafe release in the contact with Bottas.  While in the past Verstappen may have lost his mind and done something stupid on the track, he instead stayed focus and stalked Hamilton for the remainder of the race.

Throughout the last 15 laps, Verstappen consistently pulled alongside Hamilton in the hairpin but could do nothing with the position, and when he looked to beat Hamilton in the Nouvelle Chicane he instead punted Hamilton into a larger lead.

Verstappen wound up fourth with his teammate Pierre Gasly behind him in the finish.  Carlos Sainz Jr. earned sixth in a quiet drive for McLaren, the Toro Rossos of Danil Kvyat and Alexander Albon took the next two spots, with Daniel Ricciardo finishing ninth, then Romain Grosjean taking the final points-paying position in tenth.

Hamilton earned his 77th win in what was the 77th running of the Monaco GP and now holds a 17-point lead over Bottas with Vettel sitting 55 points back.