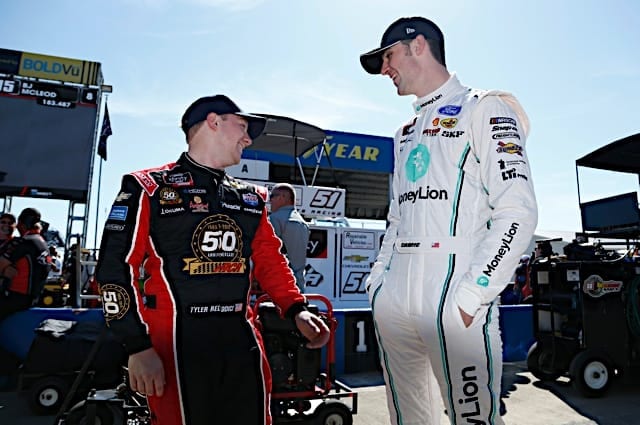 Tyler Reddick is making a habit out of proving that statistics aren’t everything.

He did it in a big way last season, claiming the NASCAR Xfinity Series championship despite winning only the first and last events of the year. It’s not fair to say he stole the title because he came up big when it mattered most, but considering he had the fewest poles (zero, actually), stage wins, top fives and top 10s of the four drivers who rolled into Homestead-Miami Speedway with a chance to be champion, the numbers definitely didn’t favor him.

Reddick’s win in the Alsco 300 on Saturday was a case of stats not telling the whole picture in a whole different way. By putting his No. 2 Chevrolet out in front to lead 110 of 200 laps, a quick glance would suggest that he dominated the race. Yet Reddick had to put in a full day’s work at Charlotte Motor Speedway to stay there, prevailing over numerous restarts and potential momentum swings, while avoiding the kind of trouble that struck down his chief rivals, Christopher Bell and Cole Custer.

That was no easy feat considering Charlotte did its best Darlington impression, beckoning driver after driver into its outside wall. By the time 300 miles were through, fans had been treated to a baffling non-caution with obvious debris on the track, a questionable decision not to pit, worries about running out of tires, and, for those watching at home, Cup Series drivers handling the entire broadcast with mixed effectiveness.

Without the top Toyota and Ford drivers around at the end, it’s tough to say with certainty that Reddick was the class of the field. What can’t be questioned, though, is that he earned this victory, one that assures he’ll have an even more impressive resume than he did a year ago when he heads into the playoffs to defend his crown.

For once, it didn’t seem like the choice of lane was the primary factor in who came out on top during restarts. Far too often at the majority of tracks, it seems like picking the outside line guarantees the driver currently in the lead will stay there, and while that seems like a somewhat fair deal for getting to the point in the first place, it also reduces the skill factor to a simple case of “don’t spin the tires.”

Not so on Saturday in Charlotte, as Reddick was able to defend his lead on several occasions despite picking the inside, a decision which was questioned at least once by the Drivers Only booth team of Kevin Harvick, Clint Bowyer and Joey Logano. Noah Gragson, who had a strong day on restarts himself, edged him out to lead a lap once, but not to the point where he could pull away from Reddick.

The other undeniably good thing to see was Jeffrey Earnhardt recording his career-best third-place result, his first top-five finish in any of NASCAR’s top three series. He didn’t qualify for underdog status as he was once again driving for Joe Gibbs Racing at Charlotte, but it was exactly the kind of performance on a hot, challenging day that proves he can compete against the top dogs if given a fighting chance in terms of equipment and personnel.

It’s worth noting that Earnhardt survived an afternoon when every JGR car had a right-side tire issue at some point during the race. He recovered from his, but Bell and the No. 20 team weren’t so lucky, making a terrible decision not to pit when Bell’s Toyota got into the wall with two laps remaining in stage two.

Teammate Brandon Jones had almost simultaneous misfortune and decided to come to the pits. Bell gambled by staying out and paid for it dearly, with the already flattened tire shredding, the wheel catching fire and enough damage being done overall that it ended his day.

As Harvick and friends explained, the thinking wasn’t hard to parse: Bell’s team was simply attempting to limp to the end of the stage and not go a lap down. But to horribly mangle a famous quote, for want of a lap, the race was lost, or at least a chance to compete for a race win as Bell looked like he might (again) have the car to beat.

There’s little doubt that Bell is the championship favorite when everyone is on their ‘A’ game, but there are occasional reminders that his team sometimes doesn’t have it. He’s already finished 30th or worse twice this season, whereas Reddick’s worst day in 2019 was coming home 14th at Las Vegas Motor Speedway. Bell’s bunch will need to make sure they aren’t beating themselves come playoff time.

Debris cautions are frequent enough that fans occasionally crack jokes at their expense when one is called and there’s no easily visible evidence on the racing surface. So it’s a little surprising when NASCAR decides not to wave the yellow flag when a large piece of someone’s race car is out there for the whole world to see.

That happened during the Alsco 300, and with Murphy’s Law also tagging along for the ride, the debris in question ended up wedged in the front of Custer’s Ford.

Could be a day changer for @ColeCuster. ?

Damage on the front of the No. 00. pic.twitter.com/JVYPy7bWRb

The word from NASCAR was that officials were told and/or under the impression that the debris had bounced into or under the SAFER barrier and was not a hazard. Fans on Twitter felt differently, noting how close it was to the end of the first stage.

Big ass piece of debris.
Shown on camera.
Several times.
Driven over by multiple cars.
And no caution? ?

I get the end of the stage was there, but I'm pretty sure that debris needed a caution.#NASCAR#ALSCO300

#nascar preaches safety yet hunk of metal sitting on track and no caution.

When there's a small piece of debris NASCAR throws the caution. But when large debris gets thrown around the track theres no caution

So no caution for a large piece of debris just so they could end the stage under green, which caused damage to one of the race's main contenders. #NASCAR https://t.co/UNDwujPn8M

So teams reported the big piece of debris, @NASCAR knew about it, but no caution cause I guess they wanted to finish the stage under green then to be safe. #ALSCO300 #NASCAR

You get the idea. Custer battled back into the top five in the final stage but eventually had more issues and ended up 24th. Yet it was his first bad break that was undeniably ugly.

A regular in this part of the column in 2019, Ryan Sieg bounced back from two straight races outside the top 10 and rolled home in eighth place. It was Sieg’s fourth finish of eighth or better this season after recording only one such result in 2018.

Another driver earning a well-deserved “attaboy” was Stephen Leicht. By ending the race in 15th place, he picked up his best 2019 finish and first top 15 since Daytona in February 2018. It was an encouraging day for JD Motorsports in general, with all four cars ending up 18th or better.

With the Dash 4 Cash behind us, Cup Series drivers were permitted to run in the Alsco 300, though Austin Dillon probably wishes they weren’t. Running in the No. 10 Kaulig Racing Chevrolet, Dillon ran in the top 10 most of the first two stages but had bad luck find him later in the form of a run-in with John Hunter Nemechek that knocked out his crush panel.

Reports from the track suggested either heat or engine exhaust were getting to Dillon, and it turned out to be the former that forced him to pit and have Richard Childress Racing teammate Daniel Hemric replace him. “Why not just park the car,” you might ask? It’s possible that sponsor obligations played a part, or a desire to just see that all the hard work to prepare the car didn’t go to waste. Still, Hemric ended up pulling into the garage before the end of the race anyway, which turned the whole situation somewhat silly.

What was no laughing matter was the heat that Dillon felt, with Autoweek reporting that he suffered actual burns while running sans crush panel. Happily, he’s expected to run the Coca-Cola 600 on Sunday.

“I had no warning of blowing a right front. I was actually a little bit loose that entire run. I guess we ran something over.” – Christopher Bell

“We just gave it all we had right there at the end. I literally drove my guts out at the end right there. That’s literally all I had left in the tank.” – Jeffrey Earnhardt

“I’m just so pumped about the work ethic of everyone at the shop and the guys here with me today, they just worked their tails off. We held off Justin Allgaier, who is really tough to beat. I won at Charlotte — a place I used to hate.” – Tyler Reddick

The Alsco 300 wasn’t the best Xfinity Series race of 2019, but it’s likely to go down as one of the more memorable thanks to its numerous plot twists and the Drivers Only broadcast. It also served as a bit of a “state of the series” snapshot, with Reddick, Bell and Custer standing out from the pack but the next wave of potential contenders jostling for position to join them.

Justin Allgaier has had a sleepy start to his campaign, but he finished a strong second and might have found what he needs to contend for wins. Gragson showed more than he has on some weeks, while Jones, Nemechek and Chase Briscoe all were factors at times as well. At least one from this group is likely to end up in the Championship 4, and it should be intriguing to see who steps up during the summer months.

See you in a bit as the Xfinity Series takes another three-week break. Kidding, of course, just to see if you are still paying attention by this point in the column. Pocono Raceway is the actual next stop, hosting the tongue-tying Pocono Green 250 Recycled by J.P. Mascaro & Sons on Saturday, June 1.

This particular race only has a three-year history, but Cup Series drivers have taken the checkered flag every time out. You might want to check the entry list, preferably here on this very site, to see who might triumph before FOX Sports 1 airs the race at 1 p.m. ET.