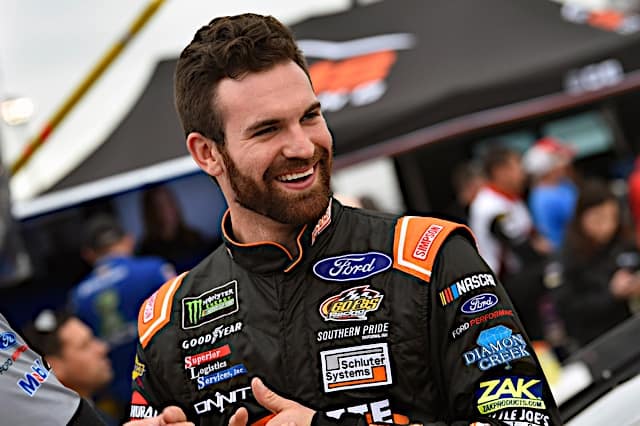 For Corey LaJoie and Go FAS Racing, a decent race at an intermediate track normally produces a result around 25th.  Sunday night was the exception to that rule.  LaJoie was able to keep the No. 32 Ford on the lead lap all night and brought the car home in 12th.  The finish is LaJoie’s best-ever on an intermediate track and the team’s best-ever effort on such a track, beating a previous best of 16th at Texas with Matt DiBenedetto.

Naturally, LaJoie was quite pleased with his accomplishment.

“We still had 25th-place speed, maybe a little bit better at times, but we just put ourselves in the right position,” LaJoie said after the race.  “There was the last restart where you could put yourself up on the wheel and make things happen.  12th is like three wins for us because any time we finish 22nd, we’re slapping hands, smiling and all that.  12th is like an anomaly, but we’ll take it.”

LaJoie started the race in 30th and made slight forward progress early on in the race.  What really came to his aid were a number of yellows due to incidents.  Tires were a big issue Sunday night, especially before the sun set.  While a number of Toyota teams had trouble, LaJoie was able to avoid it and keep trucking.

Later on a couple of somewhat strategically placed cautions towards the beginning of rounds of pit stops.  While drivers like Brad Keselowski and Kevin Harvick were forced to deal with wave around, LaJoie was able to keep himself on the lead lap all night.

The 12th-place finish keeps LaJoie 28th in points, but he’s now only 24 points behind Daniel Hemric for 25th.  The No. 8 team for Richard Childress Racing is a far bigger team than the Go FAS Racing No. 32.  LaJoie believes that the team is beginning to turn heads.

“This is the best I’ve run at a mile-and-a-half by far,” LaJoie continued.  “Just goes to show what kind of cars that Go FAS Racing is putting out on the race track.  They believe in me as a driver.  We’re making a lot of guys on the other end of the garage pretty pissed when the No. 32 car drives around them.”