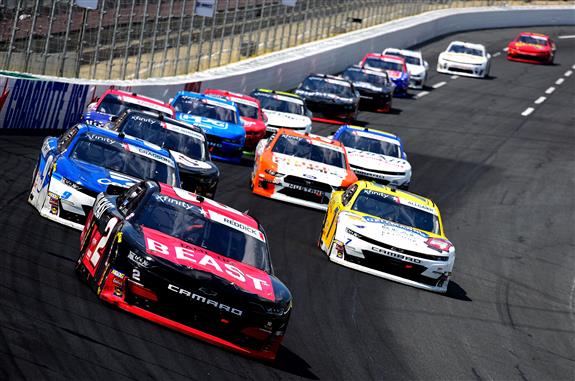 Joe Gibbs Racing battled through the adversity of a marathon weekend packed with misfortunes and came out on top. After all three of its Xfinity Series drivers battled tire problems on Saturday, the same issues sent Erik Jones and alliance teammate Matt DiBenedetto into the garage early. It later stung Martin Truex Jr and Denny Hamlin as well, while Kyle Busch suffered fender damage from his older brother in a stage four crash.

Hamlin ended with a wrecked race car on the final lap after hitting the wall several times during the night, and Truex was responsible for the destruction of Rick Ware Racing’s No. 52 machine, but Busch finished third.

Truex held off late challenges from Chase Elliott and Joey Logano before using a masterful four-wide pass on the extreme inside of the backstretch on the final restart to take his third checkered flag of the season. – Wesley Coburn

Xfinity Series: Tyler Reddick Tames the Beast of the Southeast

In a pair of practice sessions on Thursday, Tyler Reddick set a blistering pace. When qualified rolled around on Saturday morning, the No. 2 car set the third quickest time. That continued when the Alsco 300 at Charlotte began, as Reddick drove off into his own area code.

Sure Christopher Bell beat Reddick in the opening stage, but the No. 20 had a problem in the pits, a bad restart, and ultimately blew a right front tire with two laps remaining in the second stage. That, along with Cole Custer slapping the wall multiple times, made Reddick’s job a tad easier.

Reddick led a career-high 110 laps en route to his second victory in three races. It’s the No. 2 team’s eighth-consecutive top-five result. In his championship-winning year in 2018, Reddick had seven the entire year.

The No. 2 is #️⃣1️⃣ at @CLTMotorSpdwy! @TylerReddick, bring it to the ?. pic.twitter.com/5LMCjNAKrG

There were 10 cautions – and could of have been more – resulting in 12 cars posting DNFs. Justin Allgaier finished second for the third time this season, while Jeffrey Earnhardt posted a career-best NASCAR finish of third. A pair of rookies in Noah Gragson and Justin Haley, who grabbed his first career top-five finish, rounded out the top five.

Jeb Burton finished seventh and has an average finish of sixth in two races with JR Motorsports this year. Meanwhile, Stephen Leicht recorded his best finish (15) in a season-and-a-half.

Reddick stretched his point lead to 65 over Bell. Custer is third, over 100 off the pace. In addition to earning six playoff points on Saturday, the No. 2 team could be well on its way to get 15 more come September. – Dustin Albino

The Frenchman took home his first Indianapolis 500 victory on Sunday, sweeping the month of May at the Indianapolis Motor Speedway and erasing any doubt that the 2016 NTT IndyCar Series champion had overstayed his welcome at Team Penske.

On his way to securing the Captain’s 18th Borg-Warner Trophy, Pagenaud led 116 laps, almost 100 more than any other driver.

While not quite as dominant as the number suggests, the No. 22 Chevrolet had what it took in the final stages of the race to beat out the hard-charging Alexander Rossi, who overcame a refueling issue during a late-race pit stop to finish runner-up.

The career-defining victory also vaults Pagenaud to the top of the championship hunt. While only one point ahead of teammate Josef Newgarden just a month ago, there were doubts about whether he’d still have a seat at Team Penske next season. Now, as the series heads to the doubleheader in Detroit next weekend, the conversation will be whether or not he’ll be able to take a stranglehold on the season and turn Sunday’s win into a second series championship.

Further back in the field, Conor Daly, driving for Andretti Autosport, put up his best Indy 500 result, coming home in 10th after running much of the day in, or just outside, the top five.

Pippa Mann also finished a career-best 16th, ahead of both Scott Dixon and three-time winner Helio Castroneves, in what could very well be his swan-song at the speedway. – A.J. Hecht

It’s very understanding the amount of devotion that one manufacturer has in the ARCA Menards Series especially with Venturini Motorsports and DGR Crosley. Before Thursday’s race at Charlotte, Toyota had won 10 in a row dating all the way back to last year at Logan Seavey’s first career victory last year at DuQuoin. The last manufacturer to win in the series that wasn’t a Toyota was a Ford at Berlin with Joe Graf Jr.

On Thursday, it happened again but this time with Graf’s teammate Ty Majeski. Majeski hadn’t made a start since 2017 before Talladega last month but in two starts, Majeski is proving that it wasn’t his fault he didn’t land in victory lane in the Xfinity Series with Roush Fenway Racing. Majeski capitalized on Michael Self staying out late to earn his first career victory in the ARCA Menards Series.

Despite finishing fifth Thursday, Self kept the points lead by 55 points over Travis Braden.

The ARCA Menards Series hits the track again on Wednesday, May 29th for the open test at the Pocono Raceway. The General Tire #AnywhereIsPossible 200 will be shown live on FOX Sports 2 at 5:30 p.m. ET and will be shown delayed at 8 p.m. ET on FOX Sports 1. – Christian Koelle

The past year or so has not been all that great for the FIA World Endurance Championship.  The ongoing issue of what the regulations for the LMP1 class will be beyond next year is causing serious consternation.  There are currently no manufacturers committed beyond Le Mans next year.

In the GTE-Pro class, they already knew that Le Mans next month was going to be the final race for Ford as a factory outfit.  That move was made because Ford only commissioned a four-year GTE program.  They’ve got company now, but for a different reason.  BMW announced Wednesday (May 22) that it will not be returning to the WEC for the 2019-20 season, ending their factory association with MTEK after only one season.

The 2018-19 season has been a struggle for BMW Team MTEK.  They have two second-place finishes (Fuji and Sebring) as their best finishes to this point.  Outside of those races, the team had middling results.  That performance just wasn’t enough to convince BMW to stay for another year.  Going forward, BMW will reallocate its resources in motorsports.  It is unclear whether this move with affect BMW’s other GTE program with BMW Team RLL in the IMSA WeatherTech SportsCar Championship.  The other BMW-backed programs in DTM and Formula E are set to continue.  – Phil Allaway

The Monaco Grand Prix may have been the stage for yet another one of Lewis Hamilton’s wins, this time his 77th, and yet another comedy of errors for Ferrari, it also was the site for the surprising finish of Daniil Kvyat and Alexander Albon.

The Toro Rosso pair were able to snag seventh and eighth, respectively, which not only meant grabbing much-needed championship points but also came as the highest finishes for both drivers for the season.  Not much is expected of the Red Bull satellite team as they don’t have the same budget but anytime they can score double points, it’s a big deal.

The finishing positions also highlight that all four Red Bull rides finished in the top eight.  Because Monaco is not a high-speed track, the team was able to enjoy the success of a car that handled well on the tight streets. It would be foolhardy to believe that Toro Rosso is soon to keep ripping off top tens but the result does indicate that they might be able to sneak into the mix given the right circumstances.

Thus far the team has hovered from about the ninth spot to the fourteenth, but they might be on the upswing.  In addition, any benefits that Red Bull receives from improved Honda engines will be passed on to Toro Rosso – and seeing as how Red Bull has been very vocal about their disappointment, the likelihood that Honda keeps bettering themselves after their failures with McLaren should only be assured.  Enjoy the champagne, Toro Rosso. Ava Ladner