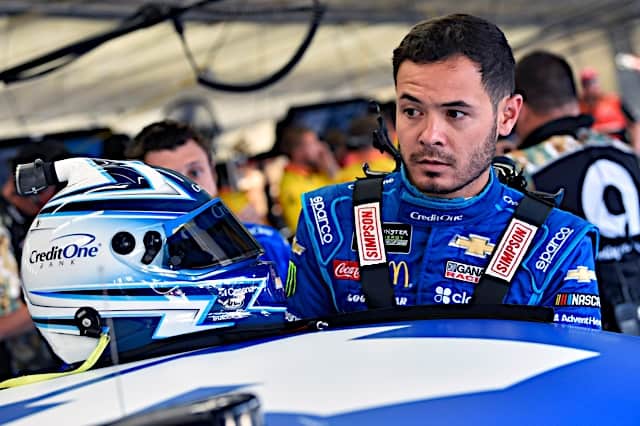 Kyle Larson spent much of the Coca-Cola 600 down in the dumps. He started 25th and spent much of the race struggling to move forward. He finally put himself in position to contend, but managed to get split on the restart. One lap later, he made contact with Clint Bowyer and it was on from there.

While Bowyer went into the outside wall, Larson spun to the inside of the track. He was then hit hard by Austin Dillon before hitting the inside wall. The contact broke suspension parts in Larson’s car, which shot him back up the track into Ty Dillon and Ryan Preece.

“I just messed up,” Larson said outside of the infield care center. “I got into there hot and got sideways. I got into Clint [Bowyer] and spun us both. It’s all on me. I’d like to make an excuse that [something broke], but I just got sideways.”

Austin Dillon was more of a victim of circumstances.

“Just a bummer right there,” he said afterward. “[Larson] came back across the track. I was trying to shoot the gap and I was the last car not to make it. I’m disappointed. Felt that we had a better car than this. Really didn’t have what I thought we had in practice. We’ve got to go to work and get ready for Pocono.

Larson, Austin Dillon and Preece were eliminated on the spot due to the crash. Ty Dillon was able to continue and finish 23rd. Bowyer was right behind him in 24th despite significant damage.

In the previous couple of races, Larson had shaken off a slump and moved up from 21st to 15th in points. Finishing 33rd as a result of the crash means he gave some of that progress right back. Austin Dillon entered the race in 18th, and a 34th-place finish dropped him back to 20th. It’s looking like the elder Dillon brother may need to win in order to qualify for the playoffs.

Austin Dillon failed to finish both races this weekend. If his xfinity car was poisoning him, why did grandpa pit a relief driver in there to poison him.