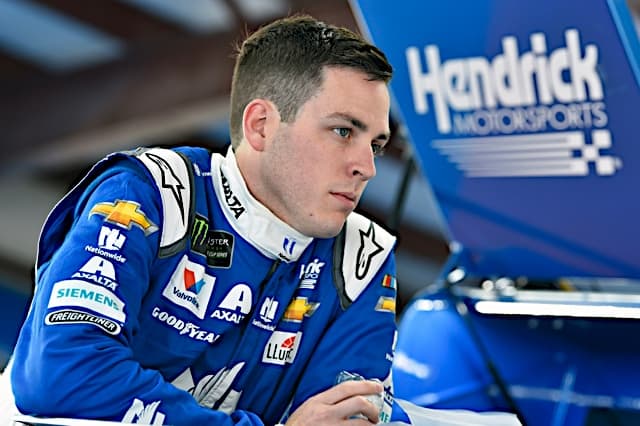 The Coca-Cola 600 is a marathon slog to close out the greatest day in auto racing, following the Monaco Grand Prix in Formula One and the Indianapolis 500 in IndyCar. Despite a quiet middle half, a chaotic first quarter and wild finish made it one of the season’s better races overall.

In all, at least 10 drivers had tire problems throughout the race, at least different 13 times (there were likely more that TV did not mention). At least 20 times, drivers got into the wall due to either super loose handling conditions or tire problems.

Alex Bowman finished seventh, the fourth straight event he’s piloted the No. 88 Chevrolet to a top-10 result. This charge has vaulted him all the way up into the 11th spot in the championship standings at the halfway point of the regular season. Even more encouraging for the Hendrick Motorsports camp, all four cars finished in the top 10 for the first time since the spring Texas race in 2016.

The rough year for DiBenedetto continues. Sunday’s 39th-place finish was the fourth DNF of the season for the No. 95 Leavine Family Racing team, who have posted just three top-20 finishes with a best of 12th at Bristol Motor Speedway in its first season as a Joe Gibbs Racing satellite. DiBenedetto is averaging a 25.8 result because of their mechanical woes. It was his third DNF in the past four races.

Chris Buescher has scored three top 10s so far in 2019, and two in a row now, following a 10th at Kansas with Sunday’s sixth-place result. The driver of the No. 37 has finished in the top 20 in seven of 13 occasions, an excellent result for a team in the middle of the pack. His rookie teammate Preece has four top-20 finishes, including a third at Talladega and sixth at Daytona.

Kyle Larson needs a reboot of 2019. He has just four top-10 finishes through 13 races, an average finish of 17.7, and has four DNFs following Sunday’s 33rd-place result after a crash where he collected both Dillon brothers and Preece, all fellow Chevrolet drivers. There have been other races where Larson’s run into problems as well, but all four DNFs have come from crashes since Texas.

Again, Joey Logano couldn’t quite catch Truex at the end, and he wasn’t a factor for most of the event. But he was there when it counted, which is why he’s scored a win, seven top fives and nine top 10s so far this season, nearly giving team owner Roger Penske a sweep of the North American racing day, which would have been a good way to end a rough week — his family lost their French Bulldog Luigi on Tuesday night.

Richard Childress Racing had a rough night. Austin Dillon was taken out late by Larson’s wreck, ultimately finishing 34th after qualifying fourth. Daniel Hemric pounded the wall early with a tire issue, but was able to continue, soldiering on to a 21st-place result, his eighth finish outside the top 20 in his rookie season. Alliance teammates Ty Dillon (Germain Racing) and Bubba Wallace (Richard Petty Motorsports) didn’t fare much better, as Ty was also part of the Larson incident, coming home three laps down in 23rd, and Wallace suffered from tire issues en route to finishing four laps down in 25th.

NASCAR is a very patriotic sport, likely because of its local origins and status compared to stick and ball sports or other forms of motorsports. Sometimes this can feel insincere and obnoxious, but on Memorial Day weekend, it felt very respectful and appropriate. I don’t understand the military mindset, but am grateful there are those who fill those roles, even to the point of sacrificing their lives.

About half the field had special paint schemes that were either military themed or patriotic, and many of them looked excellent on track.

Special Shoutout to Jake Perry, Son of @Jacob_Companies for the awesome idea on the paint schemes this weekend @CLTMotorSpdwy! ?? pic.twitter.com/tfyTHbBnlB

Rick Ware Racing’s No. 51, driven by Cody Ware, was the best military scheme, with the shark face of the Flying Tigers on the hood of an olive green race car. All three RWR cars were military-themed, possibly all derived from aircraft, and this was the first time they’d run three vehicles in a points-paying race, with the open No. 53 making its debut (the team ran three cars in The Open during All-Star Weekend).

One of William Byron‘s main sponsors is Liberty University, so it’s not that surprising that they went with a patriotic design. It was simple and didn’t draw too much attention to itself, making it the best of this category. StarCom Racing’s No. 00 also looked nice.

It seems safe to say that Corey LaJoie was thrilled with Go Fas Racing’s 12th-place finish.

Front Row Motorsports’ Michael McDowell had a rough night before crossing the line in 22nd, but there are more important things.

This is what the day was all about. I am so thankful for Chief Warrant Officer Jonathan Farmer who gave everything for his Country and for our Freedom. Meeting his family today and having him on our car was a true honor. https://t.co/SJiF6eu89K

Roush Fenway Racing reminded social media audiences of the purpose of the holiday.

Thanks to those who gave all. Freedom is never free. #MemorialDay ?? pic.twitter.com/T1W5Sl4LjJ

It’s off to the Pocono Mountains for an Xfinity/Cup doubleheader this weekend at Pocono Raceway, the unofficial home track of Frontstretch.

After picking up his career-best third-place finish this weekend while honoring a fallen police officer, look for Jeffrey Earnhardt to get into victory lane for the first time on Saturday, and for Ryan Blaney to finally get some good luck and capture the checkers on Sunday. Also, at least three drivers will have their days ended by either tire or brake failures over the weekend.

The Pocono Green 250 recycled by JR Mascaro & Sons will go green on Saturday, June 1 at 1 p.m. ET, with TV coverage on Fox Sports 1.