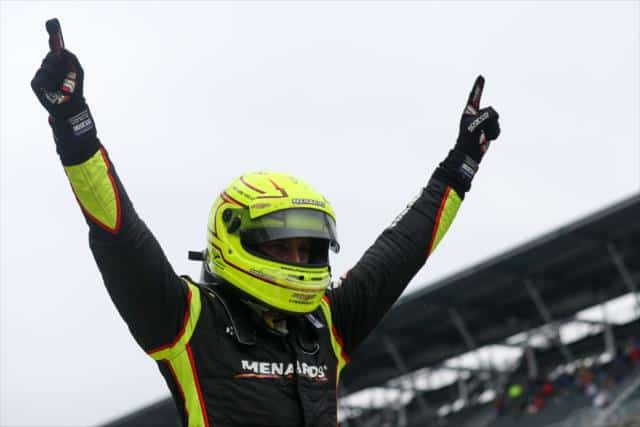 Last weekend was very, very busy. We had hot weather in Charlotte to the point of drivers requiring attention after the race on Saturday, late race action in Indianapolis and a very long Coca-Cola 600.

As you know, NBC went all out for Indianapolis. Mike Tirico, who has more or less assumed the role formerly held by Bob Costas, was there. Dale Earnhardt Jr. was there, along with Rutledge Wood.  Even Danica Patrick was in the house.

In Patrick’s case, she has all but had a clean break with the sport since she crashed out of the race last year. In Indianapolis, she was given a more scripted on-air opportunity as compared to her previous experiences with FOX Sports. The previous times were really not very good and showed that she’s not the best with extemporaneous speech.  That said, I felt that Patrick was stronger in her desk role than she ever was in the broadcast booth. Having that time to be able to plan things out really helps her. That said, she would do well not to advance the Vortex Theory stuff.

It’s rare that I’m able to work my love of game shows into pieces about motorsports, but one piece aired during the pre-pre-race show Sunday allows me to do just that. Sam Schmidt, owner of Arrow Schmidt Peterson Motorsports, was a contestant on Press Your Luck in 1985 (all three of his episodes can be seen here, here and here). In an interview on the Dinner With Racers podcast, Schmidt stated that he used the money from the show to put himself through law school.

The PYL (which is returning to television on June 12, but not on NBC) is not here for the heck of it. Pressing your luck is the basis for this piece, which takes a look at not only what Schmidt has persevered through, but James Hinchcliffe and Robert Wickens as well.

Schmidt rose from the ranks of “jalopy racers” to compete full-time in the Indy Car Series before being paralyzed in a testing crash at Walt Disney World Speedway in 2000.  Such an injury would put many people in a dark place. Not so much for Schmidt.  With the experience of knowing what his father had gone through years earlier, he did the best he could to make do.

You see that mentality with both Hinchcliffe and Wickens. Wickens’ goal is to eventually get back to driving after being injured last year at Pocono. The progress that he’s made over the last nine months is quite encouraging. In Hinchcliffe’s case, he’s had to persevere after his near-fatal practice crash at Indianapolis in 2015. From there, he was focused on getting back in the seat as fast as he could, no matter how much he ticked off his doctors.

Overall, this was an excellent piece. It’s hard to be definitive in a 17-minute piece, but it was a very pleasurable piece that covered the drive present in the Schmidt Peterson squad. You can see it for yourself at NBCSports.com in their Motors section under the video page. It’s simply entitled “Press Your Luck.”

The overall racing on-track was fast and furious, although not really at the front of the field. Simon Pagenaud more or less had the field covered for much of the race.  I did feel that there was a little too much focus on him, especially early in the race.

There was a good amount of racing for position throughout the event. Much like Cup races in recent years, the majority of this action was in and around restarts. Outside of those periods, you would get some action, but not as much as they should have.

Probably the most controversial moment of the race was the contact between Graham Rahal and Sebastien Bourdais that sparked a five-car crash late in the race. NBC Sports had the perfect angles to show everything that happened here. Viewers really couldn’t tell how big of a hit that Bourdais had at first. Subsequent replays showed that Bourdais got up on his side after hitting the wall.

Post-race coverage was pretty substantial in terms of time. The race ended just as the post-race show on NBCSN was due to begin.  Viewers got interviews with the top finishers (Pagenaud, Takuma Sato, Alexander Rossi, Josef Newgarden), then sat down and watched the post-race pageantry (pace car ride, brick kissing, etc.).  There was also some post-race analysis.

I would have liked to see more stories covered during the race. Effectively, much of the race was the Pagenaud show.  Yes, he led more than half the laps, but it seemed like he got more coverage than was really necessary. NBC Sports would do well to open up its coverage at Indianapolis to be more inclusive next year.  That said, this was a good first effort. It’s something to build on.

Next weekend, the Monster Energy NASCAR Cup and Xfinity series teams will be at Pocono Raceway with the ARCA Menards Series as tertiary support. Meanwhile, the NTT IndyCar Series has a doubleheader at Belle Isle Park with the IMSA WeatherTech SportsCar Championship also in attendance. TV Listings can be found in the Television tab.

We will provide a critique of at least the Pocono 400 for next week’s edition of Couch Potato Tuesday here at Frontstretch. For the Critic’s Annex, we’re going to take a look at Qualified, the newest ESPN 30 for 30 film and only the second in the long-running series in the world of auto racing. The film is about Janet Guthrie and her career in the top flite of American motorsports.

All season long we see the officials penalize drivers for blocking. Not a word was said about Simon weaving back and forth down the straights in front of Rossi.
Shouldn’t the Schmidt piece had something about Dan Wheldon in describing all the horrendous accidents involving his team.

Bill H
Reply to  Tom B

Moving BEFORE the driver trailing you does so is not blocking. Pagenaud was weaving well before Rossi did, moving to break the draft rather than to prevent passing, which not only is entirely legal but is regarded as clean driving.

Note that Press Your Luck is owned by German television network RTL and its Fremantle production company. Fremantle happens also to own NBC’s hit Got Talent, so the ability to use the clips was a byproduct of Fremantle doing shows for all networks.