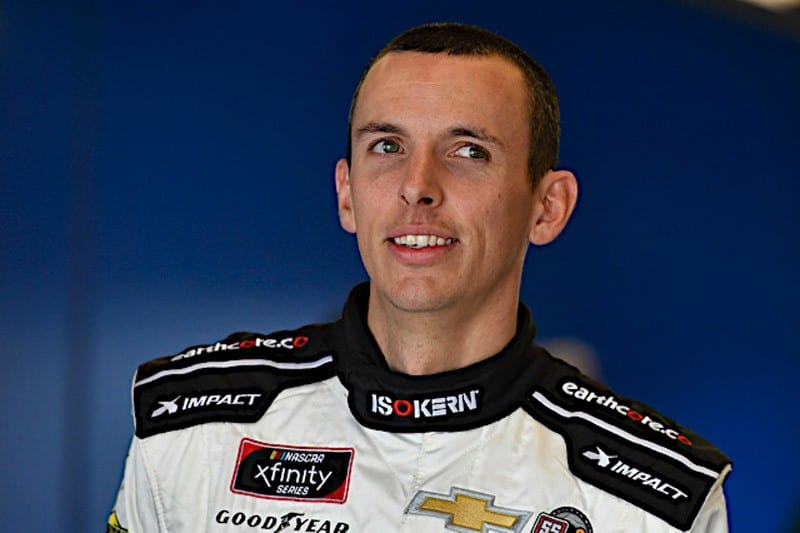 In late January, Frontstretch reported Ray Black Jr. was returning to SS Green Light Racing for the full 2019 NASCAR Xfinity Series season. Four months later and the Florida native is happy with the return to the team, having gone through the opening 11 races of the campaign.

Black, 28, began his NASCAR career with SS Green Light Racing, run by veteran car owner Bobby Dotter. Between 2014 and 2016, Black made 31 Gander Outdoors Truck Series starts for Dotter, finishing a career-best fifth at Daytona International Speedway in the 2015 season opener. In 2016, the duo made the transition to Xfinity, where Black placed 19th in the championship standings.

However, 2017 didn’t go as planned. Black dug his heels into a trio of Monster Energy NASCAR Cup Series races for Rick Ware Racing, but only competed in 21 Xfinity races with three top-20 efforts.

The realignment made sense on both parts, Black believes. The team was coming off a season in which Spencer Boyd finished 26th in points and Joey Gase, who as part an alliance with Go Green Racing, finished 20th.

But what’s different this go around?

“I think a lot of the kinks have been worked out,” Black told Frontstretch. “I think starting fresh with a team is hard to do, and we kind of got lucky. Coming into the season, it was a step in the right direction. There’s nowhere else I’d want to be.”

Black credits Dotter as to why he wanted to return to the race team. He labels the owner as being “very loyal, honest and down to earth.” But Black’s performance on the track has picked up too.

Through the opening 11 races of the season, Black has an average finish of 22.3, more than three positions better than his only other full season at the Xfinity level (25.5 in 2016). SS Green Light added Gray Gaulding to its lineup, who finished an organization-best second at Talladega Superspeedway last month.

Black can see the difference this year.

“We’ve definitely upped our performance,” Black added. “You could look at a lot of the top-tier teams dropping out. The only thing that’s changed on our side of it is we’re finishing closer to the front. We judge how we’re doing off Ross Chastain, Ryan Sieg, Jeremy Clements.

The downside is, though, the team is still running scuffed tires and not the same engines the frontrunning teams are using, even with support from Isokern Fireplaces. In order to close the gap even further, it would take “a couple more million [of dollars].”

Currently, Black sits 18th in the point standings, not far behind Clements and Garrett Smithley. He’s not surprised that the team has been stronger than it was in the past.

“I knew we were going to be competitive,” he stated. “That’s the deal, just knowing where we fit in and try to get into that next level. I think our cars are pretty close to where they should be. If you ever get up there to having an alliance or anything like that, those variables will put you into the next category.

“I wouldn’t say we’re overachieving — not yet, but we can be. We will be soon once we get locked in with each other.”

Regardless of the results, it wasn’t always sunshine, rainbows and unicorns for Black. During the 2017 off-season, it was announced he’d be running the full Cup schedule with Rick Ware Racing. However, the sponsor pulled out, leaving Black without a ride at the Cup, Xfinity and Truck level.

In 2018, Black competed in a total of 11 NASCAR races, 10 being in the Xfinity Series with BJ McLeod Motorsports and Mike Harmon Racing. In those 10 races, he had a best outing of 17th in the fall race at Las Vegas Motor Speedway, posting two additional top 20s.

“It wasn’t fun for anybody,” Black said of 2018. “I think we made the best of it. We had some good finishes. The problem is when you get 10 races, you want to perform as good as you can. Bristol [Motor Speedway] comes to my mind. We were running top 15 there and running with a [Team] Penske car and another good car, and we ended up blowing up. Still, it was a good run and everybody had a good time. Those kinds of things really reminds you how to be competitive with those guys.”

With running a limited schedule last year, Black felt he had something to prove this season.

“You want to stay relevant,” Black said. “With 10 races, I wanted to know I could pick up where I left off. When you’re doing it every week, it’s easy to get lost and be like, ‘Oh, I had a bad weekend, I can come back next week.’ Doing 10 races and having so much time off, I couldn’t wait to back inside a race car.”

“I’ve always said I wanted to get Bob his best finish,” Black mentioned. “There’s only one spot to get. Now, I’m like, ‘Oh, I’ve got some work to do.’ We all do it for ourselves and our careers, but we love making Bob happy. You really can’t get a reaction out of him, but every time he smiles, you’ll get happy.”

The No. 07 team is coming off a 16th-place finish at Charlotte Motor Speedway, his fifth top-20 run of the year.