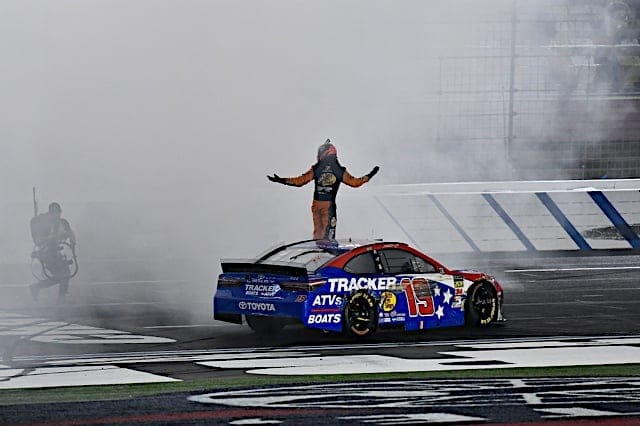 Racing’s greatest day is, has been and always will be great, and last Sunday was no exception.

It was also long. REALLY long.

No race in American motorsports is longer than the Coca-Cola 600 in the Monster Energy NASCAR Cup Series. In recent years, it’s been a bit of a snoozer on track. Last season, Kyle Busch led 377 laps en route to the win. Two years prior, Martin Truex Jr. led 392 of 400 circuits. Not the most compelling.

But last weekend, the racing was extremely compelling: 400 laps of tire strategy, comers and goers, exciting restarts with the fastest car winning the race. Not much more you can ask for, right?

Well, to some, there’s always more to be desired. Earlier this month, Denny Hamlin was asked whether or not the Coca-Cola 600 needs to be 600 miles.

“The sport doesn’t need any particular thing,” he said. “I don’t think that anything is totally necessary. If the race was 300 miles, you’re going to have the same, I believe, core group watch the race and possibly even more that are interested because it’s not five hours long.”

The Coca-Cola 600 isn’t what it once was. But that doesn’t mean it should change.

“Tradition, ‘shmadition,’” Hamlin said. “It’s whatever. All sports adapt and change. I hate it when people say, ‘well, that’s the way it always was.’ Things are different. I’d be just as happy with a Coke 300 trophy as a Coke 600, to be honest with you. I’m for whatever, but I certainly know that from my friends, they choose to come All-Star week and not 600 week because it’s just too long and they don’t want to sit here for five hours.”

Here’s where I start to disagree with Hamlin. Although I’m 22, I like to think I’m well versed enough in the sport to know some of the biggest and most important traditions. One of those timeless rituals is the 600-mile race on Memorial Day weekend.

Four hours and 50 minutes is suboptimal for the time of a race. But this was a one-off of sorts. Just because the equipment is better, drivers have power steering and AC units and 600 miles isn’t what it used to be doesn’t mean it should change.

In an age when everything is being changed (mostly for the better), it’s rare when people sit back and reflect on a good thing they’ve got. Instant gratification, be the first to break the news, now now now, more more more, change change change. We’re all guilty of it, myself included.

The NASCAR schedule will be revamped in 2021 (we can hope, anyways). But a few races have been deemed untouchable by most: the Daytona 500, the Bristol Night Race, the Southern 500 and the Coca-Cola 600.

I ask you: what’s the benefit of shortening the 600 to 400 miles? A couple hours more of your Sunday on Memorial Day weekend?

I’ll keep the couple hours and 200 miles for the build-up, pageantry and marathon that is NASCAR’s longest race.

We need some tradition to stay, not go.