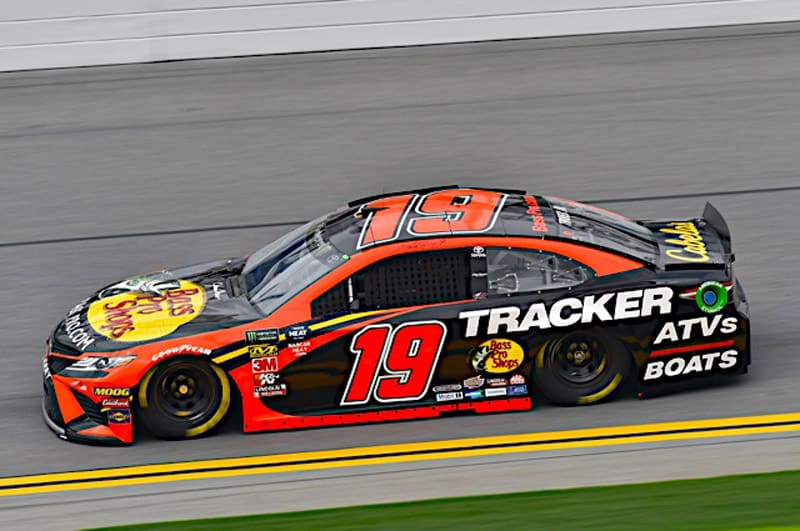 The Monster Energy NASCAR Cup Series shifts gears to the Tricky Triangle for the Pocono 400 Sunday (2 p.m. ET, Fox Sports 1). The cars will again use the lower horsepower package with aero ducts.

Pocono Raceway is one of the longest tracks on the circuit. It’s two and a half miles with three very unique corners and is one of the toughest races of the year. Since there are only 160 laps in the event, there aren’t as many bonus points available on DraftKings. In addition to the points awarded for finishing position, you can earn up to 40 extra points for laps led. You can also earn up to 80 DraftKings points for fastest laps.

Finally, remember that the driver’s finishing position can add or subtract points in your lineup, depending on where he starts. For example, last week Erik Jones, unfortunately, wrecked out of the race early, and DraftKings subtracted 20 points from users’ final score (if they rostered him).

Feel free to use any of the following drivers in your lineup if you wish, and check where they qualify for Sunday’s race.

Kyle Busch bounced back after a rough outing at Kansas to score his seventh top-three finish of the season last week. Driving the patriotic M&M’s Toyota for Joe Gibbs Racing, Busch avoided his fellow cohorts’ tire troubles and led 79 laps. In fact, he’s led 684 laps so far this year in all but two races: Martinsville and Atlanta.

At Pocono, Busch has led 239 laps in the past two years and won each year’s second event. In 2017, he led 74 laps and won the August race from the pole. Last year he started further back in the pack, but that was because he failed inspection. He initially had qualified from the front row in that race. Busch is certainly one of the top drivers for this race.

If there’s anyone to whom I might pivot my choice from Busch, it’s Truex. He is having one of his best stretches of the season so far, with victories in three of the past five races, including the Coca-Cola 600 last weekend. Even after hitting the wall in that race, his No. 19 car sped away from the field and led the most laps. Interestingly, Truex started each of the previous four races outside the top 10. If he does so again, he could be highly beneficial in a race with little bonus points available.

However, based on Truex’s recent track history, he is somewhat risky to use in your lineups. He began each of the past five Pocono races in the top 10, including four top fives and one win. While it gives him a greater chance to lead laps, he’s only finished higher than he started once in that span. Still, he could be worth the risk, especially in tournaments.

The driver of the Freaky Fast No. 4 Ford has finished fourth five times so far this year. Last week, Harvick earned his ninth top 10 of the season. Though he found speed at Kansas and in the All-Star Race, he’s still searching for his first victory of 2019. Pocono is as good a race as any to get that trophy.

Not only is Harvick fast this year, but he’s also very quick at the Tricky Triangle. Out of the previous 10 races here, he has seven top fives, eight top 10s, and four second-place finishes. He showed speed in practice, but if he doesn’t qualify near the front, he could give you major bonus points if he finishes well.

It was a rough end to a strong beginning for the Team Penske driver. Keselowski led 76 laps up to the halfway point, but a late-race spin put him behind. It’s been a mixture of highs and lows for his 2019 season. He has three victories but also finished 12th or deeper in five races. Even though this is the case, he is still a good tournament play because of his history at Pocono.

Before the last race here, Keselowski ended six straight races in the top five (beginning in August 2015). In addition, he led 95 laps in this event in 2014, so he does have that upside available. Finally, he started this race last season 17th and finished fifth, showing his potential for positive place differential points.

I mainly chose Bowman for his performance in recent races. In fact, his Hendrick Motorsports teammates have also thrived as well. Bowman, William Byron, and Chase Elliott all led laps last week. Additionally, both Bowman and Elliott have four straight top 10s. Bowman also led 63 laps at Kansas a few weeks ago.

Last July, Bowman had his finest Pocono race in three years (2014-2015, 2018). He qualified 10th and ended the race third. Since this is only his second full year with Hendrick Motorsports, he has a bit of a risk. He or his fellow comrades may be risks you should take to stay above your contests’ cash line.

Stenhouse now has two great races in a row, finishing 11th at Kansas and fifth in the Coca Cola 600. The Roush Fenway No. 17 team seemed to have found speed to compete and possibly contend for the lead at tracks outside the superspeedways. He was also very quick in final practice (fourth). Surprisingly, his price decreased since last week. This could be due to his track history at Pocono.

Stenhouse’s highest start here was 14th in the second 2016 race, and he finished 18th. However, he does have the ability to come out ahead of his qualifying position. In three consecutive years in the Pocono 400, he started 23rd twice and 25th once, and finished in the mid-teens. His price makes him feasible enough to fit into your lineup with an expensive driver.

I wavered between Corey LaJoie and Tifft for my Dark Horse Performer but decided to go with consistency over upside. Since Las Vegas, Tifft has stayed relatively within the mid-20s to low 30s in DraftKings points. In the previous two races, the young Front Row Racing driver qualified 26th and finished 21st and 20th.

Tifft showed the same capacity in the Xfinity Series at Pocono. In each year, he started 31st and 21st and finished 10th and 14th. This is the potential you need to fit some pricier drivers in your roster.