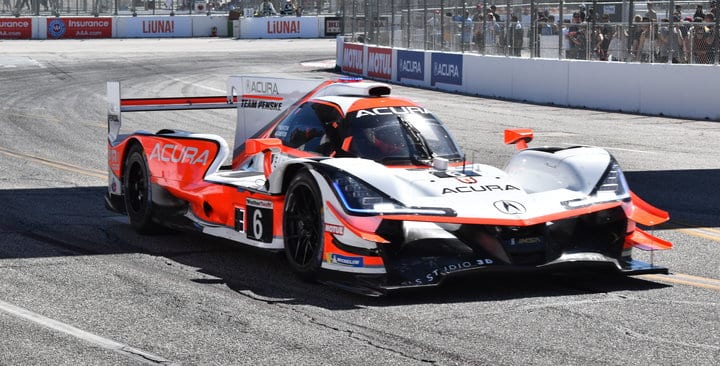 Acura Team Penske’s recent excellent form continued Friday (May 31) at Belle Isle Park as Juan Pablo Montoya claimed pole for Saturday’s Chevrolet Detroit Grand Prix presented by Lear.  It is Montoya’s first pole of 2019 and the No. 6 car’s second of the year (teammate Dane Cameron won the pole at Sebring).

“It’s great.  Everyone at Acura Team Penske has done an excellent job, ” Montoya said to IMSA Radio’s Shea Adam after the session.  “We struggled a little bit this morning with the balance, but in qualifying, it was good.  Had a bit of understeer, but as we turned laps, [the car] kept getting better and better.”

What was quite amazing about the pole speed was just how much faster it was than last year.  Montoya’s pole lap was at an average of 106.585 mph, a brand new track record.  The lap itself was 2.9 seconds faster than last year’s pole.  Some of that time gain can be attributed to the Michelin tires as compared to last year’s Continentals, but not all of it.

Montoya’s lap was two-tenths of a second faster than teammate Helio Castroneves, who gave Acura Team Penske a front row sweep.  It appeared that compared to everyone else, the Acuras were significantly faster than everyone else in the Turns 1 and 2 complex.  Since that complex exits onto the longest straight on the course, the extra speed was crucial.

Mazda Team Joest’s Jonathan Bomarito put down a flyer to qualify third in his Mazda RT24-P, while Action Express Racing’s Pipo Derani was fourth in the best of the Cadillacs.  Derani’s teamamate Joao Barbosa will start fifth.

In the GT Daytona class, it was Turner Motorsport’s Robby Foley that put the sole BMW M6 GT3 in the field on the class pole with a lap at 94.310 mph around the 2.35-mile course.  That lap was a mere three-hundredths of a second faster than Zacharie Robichon, who is driving for Park Place Motorsports this week (PFAFF Motorsports chose not to enter the race, while Park Place’s regular drivers are in France for Sunday’s Le Mans Test Day).

Meyer Shank Racing with Curb-Agajanian’s Christina Nielsen will start third in class in her Acura, a good position to give teammate Katherine Legge a chance at her third straight class victory at Belle Isle Park.  Trent Hindman in the second Shank Acura will start fourth, while Richard Heistand will start fifth in the No. 14 AVS Vasser Sullivan Lexus.

Friday’s qualifying session took place under sunny skies and warm weather.  That will likely not be the case on Saturday.  Rain is in the forecast, and things could get dicey at Belle Isle Park.  The Chevrolet Detroit Grand Prix presented by Lear can be seen live on NBCSN at 12:30 p.m.