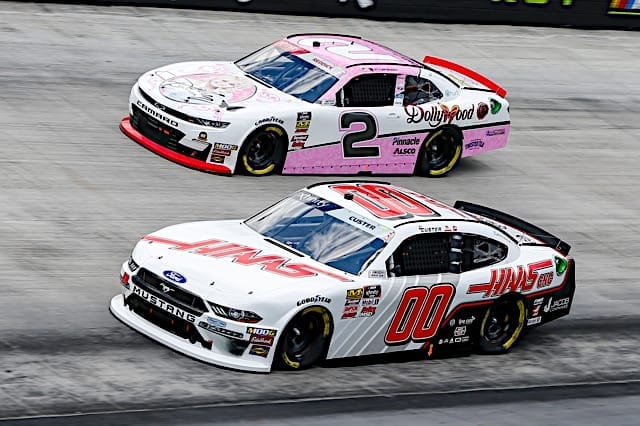 In a pair of practices for Saturday’s Pocono Green 250 Recycled by J.P. Mascar & Sons, Xfinity Series points leader Tyler Reddick and Cole Custer topped the leaderboard at Pocono Raceway. Christopher Bell wasn’t far behind in either session, as those three topped the charts in both sessions.

Coming off of leading a career-high 110 laps and earning his second victory of 2019, Reddick topped the speed charts in opening Xfinity practice.

There was one incident in the session when John Hunter Nemechek backed the No. 23 GMS Racing Chevrolet into the wall. Nemechek was 16th on the scoring pylon at 163.268 mph.

Thirty-one of 38 cars attempted a lap. Morgan Shepherd was the slowest, 48 mph off the pace (120.363 mph). Haley and Garrett Smithley both ran 15 laps, the most in the 50-minute practice.

The second Xfinity practice didn’t look much different from the first, but this time Custer topped the scoring pylon at 169.383 mph, exactly one-tenth quicker than Reddick (169.065 mph).

Both Reddick and Cindric turned 33 laps, the most in the session. Eight drivers made a run of 10 consecutive laps and Custer was quickest at 167.818 mph. Reddick was right behind at 167.791 mph.