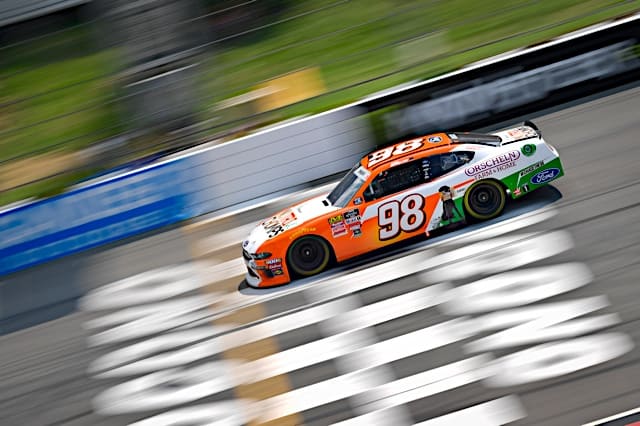 Since the beginning of the 2019 season, Chase Briscoe has steadily improved in his rookie campaign for Stewart-Haas Racing. The No. 98 team chalked up another top-five result in Saturday’s (June 1) Pocono Green 250 Recycled by J.P. Masaro at Pocono Raceway.

Briscoe started the race from 12th, his worst starting position since late March at Texas Motor Speedway (15th). In the opening stage, the No. 98 Ford maintained its track position in 12th, before ending the second stage in fourth, just ahead of SHR teammate Cole Custer, who dominated the opening stage.

In the final stage, Briscoe remained a threat for a top-five finishing position, but on a green-white-checkered restart, the No. 98 lined up inside of Custer. Ultimately, he didn’t receive a big enough push to get clear of the No. 00 car.

“The [No.] 20 didn’t have the greatest restart behind me and [Tyler] Reddick just shoved Cole so far fast the both of us, Reddick cleared me as well from the second row,” Briscoe said of the late restart. “Just needed a bigger push. Even if I got the lead, I was probably too tight to be able to win the race anyway.

“Another week where we struggled in practice and salvaged a really good run. We have speed, we just need to find those last couple of tenths, and once we do that, I feel like we will be battling for wins week in and week out.”

Briscoe took the checkered flag in third, his best finish in 12 races this season. He believes the No. 98 team is close to sealing the deal based off the speed it’s shown in recent months.

“I feel like we need to get better, but we’ve been close,” Briscoe stated. “We’ve been in the back half of the top 10 in the first half [of the race], so we’ve got to get better in the first half, and if we do that, it’ll make the second half even stronger. We’ve already been really strong there, so hopefully, we can put it all together one weekend.”

Currently, Briscoe sits sixth in the championship standings, while Custer is ranked third with three victories. The Indiana native is frustrated to have a goose egg in the win column when the No. 00 has been fast all season long.

“It’s definitely frustrating when your teammate is running better,” Briscoe mentioned. “Cole has 80 Xfinity starts alone, and I don’t even have 70 pavement starts in my life. That experience means so much, and I feel like that goes back to in the race, and we’re so good by the end of the race because we get that experience. I just need more laps, more seat time. I feel like we’ve been getting better each and every week, and that’s because of seat time.”

The third-place effort at Pocono was Briscoe’s sixth top-five result of the season, all coming in the past eight races. Since the second race of the season at Atlanta Motor Speedway, he has one finish outside of the top 10, that being last weekend at Charlotte Motor Speedway (19th) despite leading six laps.

As the season progresses, Briscoe wants to put more of an emphasis on accumulating playoff points, as the No. 98 team currently has none. But the 24-year-old has an interesting take on the team.

“For how well we’ve been running, I don’t think we’re that great,” he added. “I feel like we can still improve a lot, and that’s what is kind of sickening. I feel like once it all clicks, we’re going to be really hard to beat. We’ve been close. We’ve had speed. We just need that little extra bit, and once we get that, we’re really going to be strong. Hopefully, we will find it in the next couple weeks and really put a hurting on everybody.”

The season heads to Michigan International Speedway next weekend where Briscoe has a best finish of second in two starts between the ARCA Menard’s and Gander Outdoor Truck series.