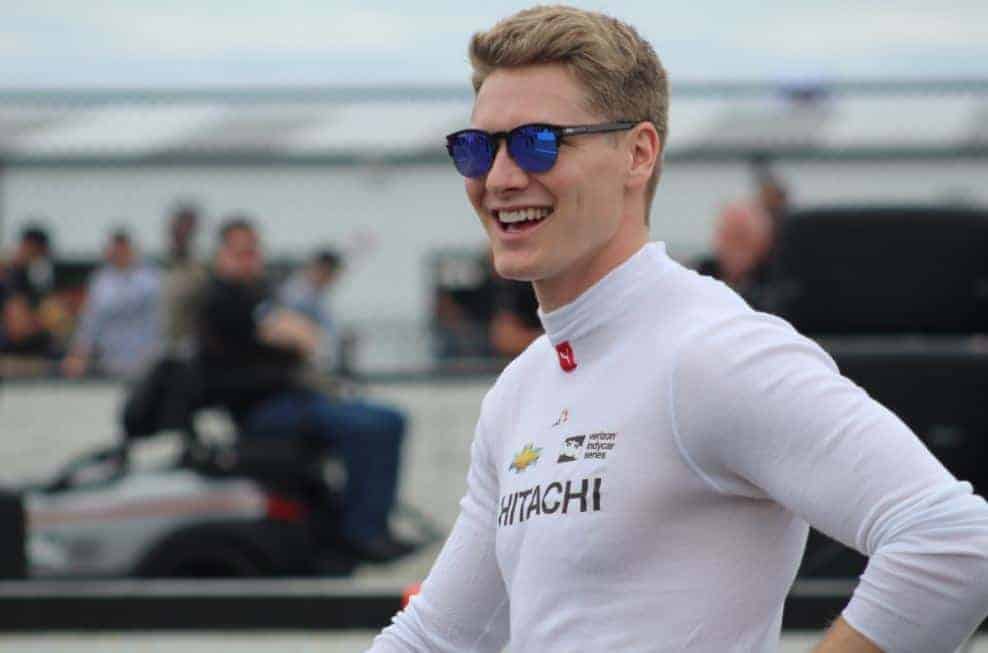 A strong thunderstorm rolled through Detroit early afternoon, bringing chaos to the Raceway at Belle Isle, but it was Josef Newgarden who managed to survive a crazy afternoon, taking the rain-shortened first leg of the NTT IndyCar Series’ doubleheader weekend at the Chevrolet Detroit Grand Prix.

After taking the lead with a well-timed switch to slicks, Newgarden held off a motivated Alexander Rossi in ever-changing conditions to capture his second win of the 2019 season, extending his points lead in the season-long standings.

Before we even went green ??

This is going to be a fun time on @nbc. #INDYCAR // #DetroitGP pic.twitter.com/Mar1ZbIHbP

Heavy rain, lightning and even a few reports of hail delayed the start of the first of this weekend’s races, forcing the series to switch to a timed race on the slippery circuit.

Will Power, however, had no issues with the conditions. The Aussie immediately charged toward the front of the field in the opening laps of the race after starting 12th on the grid, quickly cracking the top five with a series of late braking moves.

✅Check another one off the list. @12WillPower is in the top five after starting 12th in the #DetroitGP ??#INDYCAR // @Team_Penske pic.twitter.com/nvnSuejy0M

The Team Penske driver closed in on the leaders, threatening Rossi, Saturday’s pole sitter, and five-time series champion Scott Dixon, who had been comfortably cruising at the front of the field.

Meanwhile, Marco Andretti, mired back in the field, was the first to opt for racing slicks, spending several laps dancing around the narrow circuit, searching for dry pavement. The rest of the field soon followed as a dry racing line emerged, shuffling the running order in the process.

With 42 minutes left in the 70-minute race, Ed Jones made slight contact with the barrier in turn 7, bringing out the second yellow of the day. The leaders, including Rossi, Dixon and Power, took the opportunity to make the switch to slicks. Newgarden, however, was in pit lane when the caution came out, gifting the Team Penske driver the race lead with just 35 minutes to go.

This clip of @12WillPower trying to work around Belle Isle with no front right is completely unwheel. #INDYCAR // #DetroitGP pic.twitter.com/LTk5usi8GG

But disaster struck his teammate, as Power left his pit box without his front right tire properly tightened. While exiting pit lane, ahead of both Dixon and Rossi, the wheel came loose, sending him to the rear of the field and effectively eliminating any chance at a victory.

Ryan Hunter-Reay, one of the few to pit before the yellow came out, jumped up to fifth in the running order when the race restarted with just 30 minutes to go.

Shortly after the restart, Dixon, who was running third at the time, dumped his No. 9 Honda into the tires on the outside of turn six, ending his day early.

A rare mistake for the five-time champ. The last DNF for @scottdixon9 was two years ago. #INDYCAR // #DetroitGP pic.twitter.com/h8e3YpifVu

At the next green flag, with just over 20 minutes remaining, Newgarden managed to hold off Rossi for a few laps, before the fourth yellow of the day flew for Leist, who slid into the tires in turn seven, setting up a 12-minute duel to the checkered flag.

Newgarden was able to again keep Rossi at bay on the charge to the hard-braking zone at turn three, but the Andretti Autosport driver kept the pressure on the 2017 series champion. Although closing the gap to under half a second at several stages, Rossi was never able to regain the lead, giving Newgarden a win in Chevy’s backyard and a 25-point lead over teammate Simon Pagenaud.

Takuma Sato, following a stellar third place finish at the Indy 500, kept his solid season rolling with another podium, taking the checkered flag just ahead of rookie Felix Rosenqvist and Hunter-Reay, who rounded out the top five.

Fresh off his first Indianapolis 500 victory, Pagenaud came home sixth, with Graham Rahal trailing closely behind. Zach Veach, in spite of spinning during the pace laps, had his best result of the season, finishing eighth. James Hinchcliffe followed the sophomore home in ninth, just ahead of Ed Carpenter Racing’s Spencer Pigot, who notched his second top ten finish of the season.