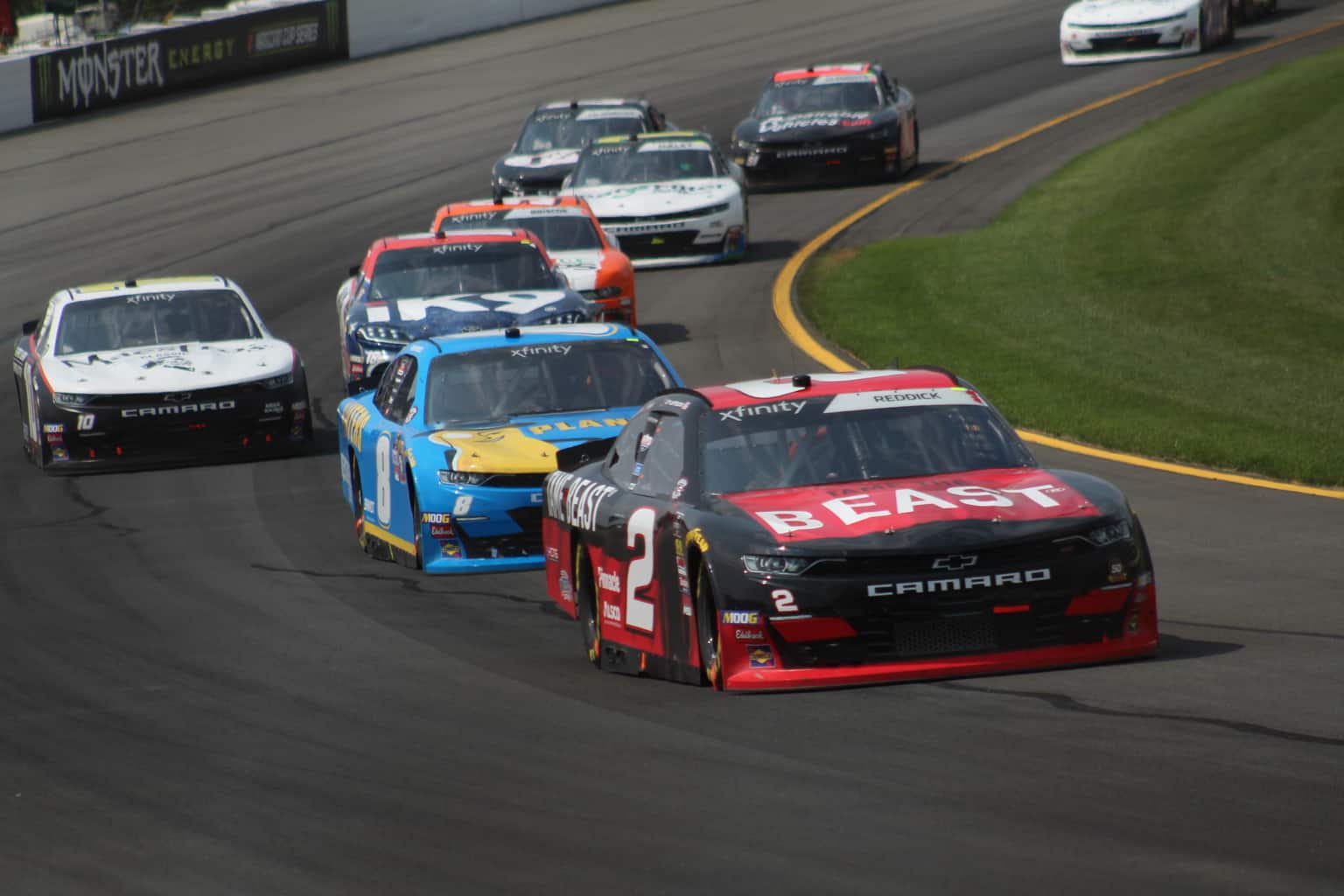 Tyler Reddick was on his way to his second NASCAR Xfinity Series win in a row and third in the last four races, until the last lap for the Pocono Green 250 on Saturday afternoon (June 1).

Reddick pushed Cole Custer to the lead in overtime, then dove underneath the No. 00 in turn 1 to take the lead.

“I was able to push Cole pretty well,” Reddick said. “The [No.] 98 was on us tight. I just felt like I had an opportunity there. Cole didn’t know where I was going, and I just had an opportunity to get to his quarter panel and just drove it in real deep and cleared him. And somehow, it worked.”

Then, one lap later with the white flag in the air, everything went wrong for Reddick. He rubbed the wall in turn 1’s exit, then Custer closed the gap in the tunnel turn before sliding underneath of the No. 2 to win the race. Reddick crossed the line in second.

“I just needed to finish that race better,” Reddick said. “I tried to save it, throw some rear brake in the last corner to make sure I didn’t miss the bottom and just got too loose on the breaking.”

The day was filled with ups and downs for Reddick, who had one of the fastest cars all race long. He had to start the race from the rear after blowing an engine in practice.

By the end of the first stage, Reddick was up to third. In the closing laps of stage 2, he went to the inside of Justin Allgaier for the race lead, but couldn’t complete the pass and settling for second.

Reddick was hanging with the leaders until the last pit stop. Under green flag conditions, Reddick pitted for a scheduled left-side tire stop and had an uncontrolled tire. He had to serve a pass-through penalty under green, which relegated him to just outside the top 10.

“I knew if I made another mistake, it was just going to make it worse so you just give it 90% and get through it and try to salvage your day,” Reddick said. “That’s about all you can do.”

Reddick raced his back up to eighth and was peeking to the inside of Austin Cindric, who wiggled up the track into Jeffrey Earnhardt to bring out the caution flag.

Reddick then used the next restart to get his way up to third before another caution lined him up on Custer’s bumper. Reddick had a better restart than Custer to take the lead but lost it with a horrendous final lap.

“I was able to navigate pretty well on restarts, but out front by myself, I just didn’t manage it very well and I just gave it away,” Reddick said. “I needed one more lap, one more corner, one more amazing move. It’s just unfortunate to work so hard, be so aggressive, get there and then give it up on the last corner. It’s frustrating.

Reddick credits the left-tire tire stop as tampering with his handling.

“I got so tight there at the end of that race, especially on those left side tires,” Reddick said. “It was plowing tight. If I would’ve ran clean laps, and not pushed and ran really slow laps, then Cole probably wouldn’t have even been there.

I hate it for our guys. But we overcame some issues today, had the caution at the end and almost won it.”

The finish was Reddick’s third second-place run and 10th top five of the year. He had seven top fives in his 2018 NXS championship-winning campaign.

“I know we wanted to win this race today, we made that mistake on the last lap,” Reddick said. “Second place isn’t a bad finish, but it does sting a little bit when you know where we were.

“I need to quit giving up races on the last lap to Cole Custer.”