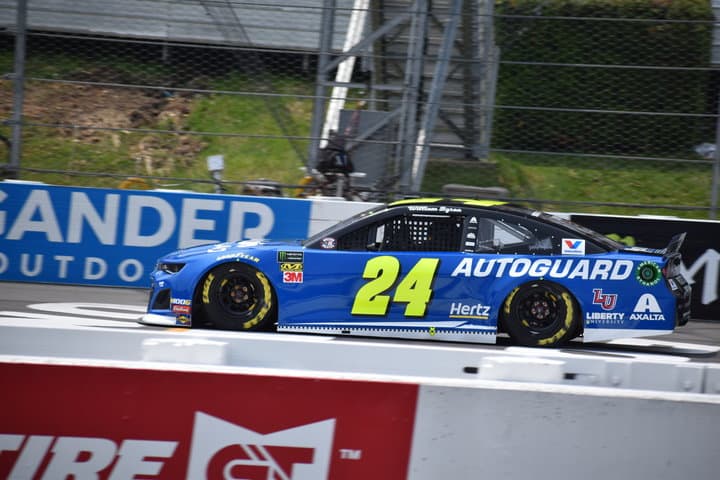 William Byron is a roll recently.  The sophomore racer posted a 173.494 mph lap Saturday afternoon (June 1) to win the pole for Sunday’s Pocono 400.  It is Byron’s second pole in a row and third this season (Daytona).  It also gives Byron his sixth front-row start of the 2019 season, a point of emphasis for crew chief Chad Knaus.

“Our goal at the beginning of the year was to qualify better and qualify well. [Doing so] improves your ability to control your race,” Byron said after the session.  “This is great. It’s an impound race, so it’s great to see our speed is there. I’m just really excited.”

Unlike the Xfinity Series qualifying session that preceded Cup qualifying, Byron was never seriously threatened once he posted his lap.  His lap was the only one in the session at over 173 mph.  It was more than a quarter of a second faster than Kyle Busch, who will start second in his M&M’s Hazelnut Spread Toyota in his best starting spot of the year.

Stewart-Haas Racing’s Clint Bowyer, who just celebrated his 40th birthday on Thursday, will start third.  Erik Jones will be alongside Bowyer, while Team Penske’s Brad Keselowski will start fifth.

Denny Hamlin will start sixth followed by Kyle Larson and Jimmie Johnson.  Daniel Suarez and Austin Dillon round out the top 10.

There was one incident during the session.  JJ Yeley spun his Steakhouse Elite/Weis Markets Chevrolet exiting turn 2 on his qualifying lap.  While Yeley did not hit anything, he did not complete his qualifying lap and will line up at the rear.  He’ll be joined back there by Matt DiBenedetto, who qualified 22nd but had to change an engine.

The Pocono 400 is scheduled to go green shortly after 2 p.m. ET on Sunday afternoon.  However, there is threatening weather in the forecast.  As of right now, there has been no change to the scheduled start of the race.  Regardless, pre-race coverage will start with NASCAR RaceDay at 12:30 p.m. ET Sunday on FOX Sports 1.