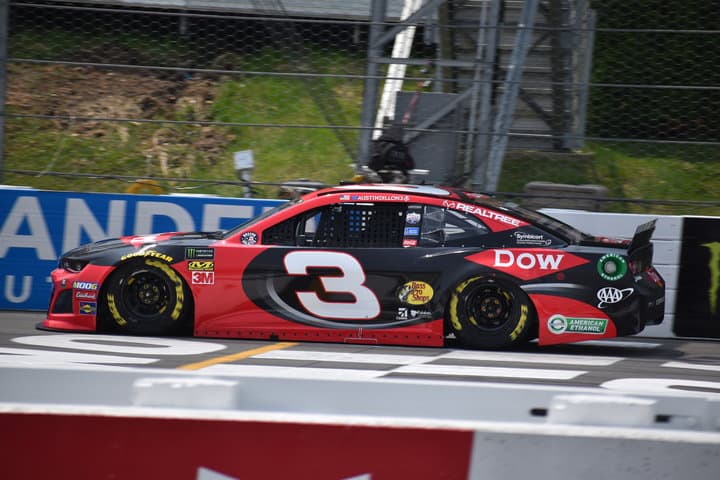 Austin Dillon was planning to use Sunday’s Pocono 400 to pick up some points on his rivals after crashing out of the Coca-Cola 600.  Unfortunately, he ended up having the worse possible outcome.  Minimal points.

Dillon started 10th and lost a couple of positions early.  After the competition caution, Dillon was running in 13th when Jimmie Johnson had to check up slightly entering turn 3.   Apparently, Paul Menard did not see this and piled into the back of Dillon.  Dillon slid up and hit the wall hard with the right rear corner.  He then spun the car.

AD's day comes to an early end at @poconoraceway. ☹️

Dillon was able to drive the DOW Chevrolet back around to the pits, where the pit crew swarmed over the car.  After a couple of minutes, the call was made to to give it up.

Afterward, Dillon was very short with the assembled media.  In an interview with MRN Radio, he simply stated that “[Menard] hit me!” then walked away.  Later on, he was still upset with Menard when approached by FOX Sports’ Vince Welch.

Austin Dillon: "The No. 21 hit us … took me out of the race." pic.twitter.com/5GdiXJDZTs

For what it’s worth, Menard owned up to the crash and said on the radio afterward that it was his fault.  That won’t make Dillon feel any better, though.

After crashing in Charlotte, Dillon entered Sunday’s Pocono 400 21st in points, 27 points behind Kyle Larson in 16th.  The crash on Sunday relegated him to a 37th-place finish and earned Dillon only one point for the day.  As a result, he will travel to Michigan nearly a full race out of the final playoff spot.

Hmmm. How did he win at daytona again? Didn’t he crash the leader? Hypocritical at best for a racing deal.

What a baby. Austin caused his own wreck this time.

A little different from how happy he was after crashing Almirola for the 500 win! Karma can be a bitch !!