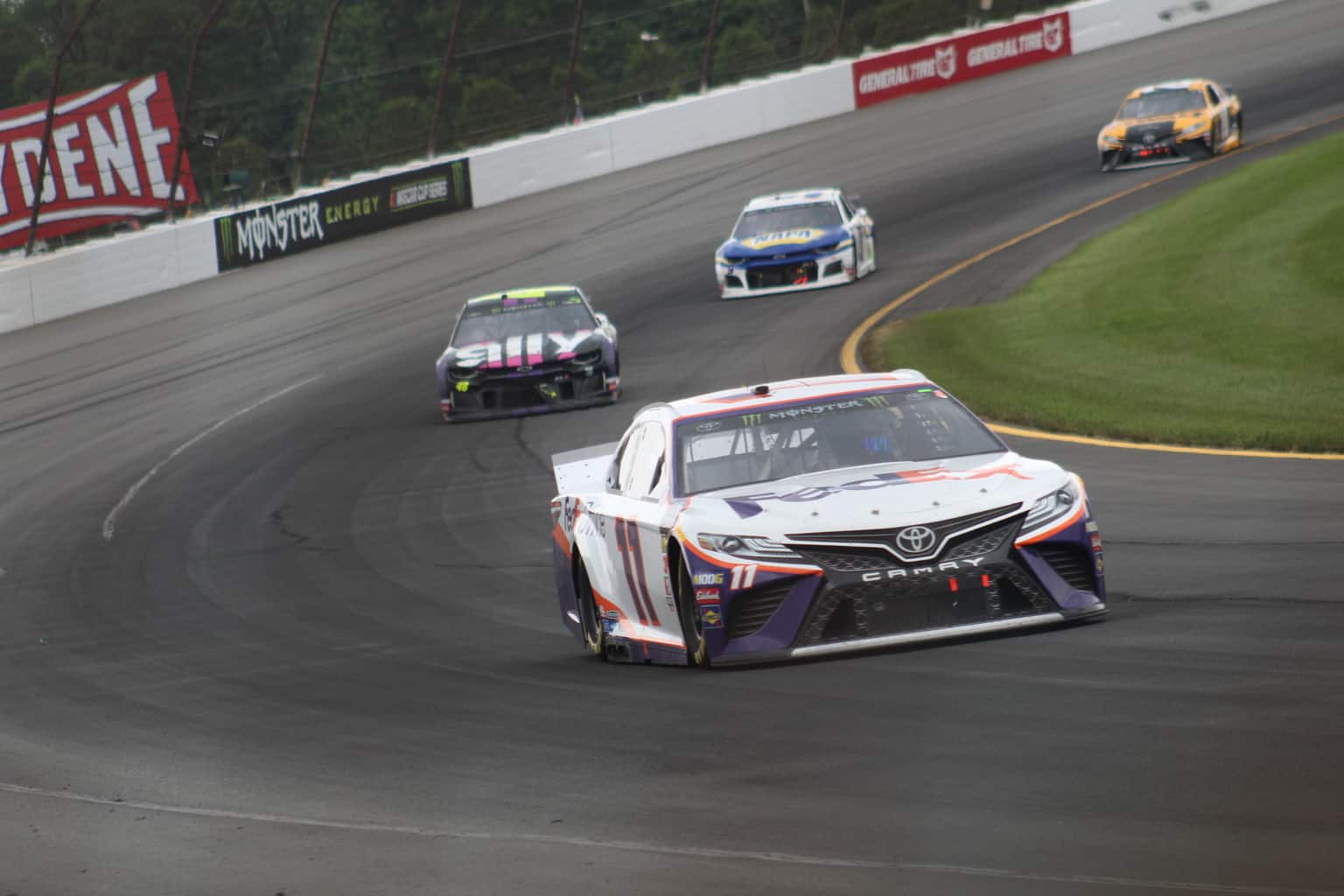 Denny Hamlin is one of the best ever at Pocono Raceway, posting four wins at the Tricky Triangle. And he had another fast car in the Pocono 400 on Sunday afternoon (June 2), but was relegated to a sixth-place finish despite having top-five speed.

“We ran really well,” Hamlin said. “Everyone in front of us chose to take two tires there, and we chose to take four tires and we couldn’t pass them. We were faster, it just didn’t matter. As soon as you’d get to the corner, you’d lose three or four car-lengths and it took you a whole straightaway to get half of that back.

Hamlin said with a grin that the spots that caused the most trouble on the track were, “anywhere you turned left.”

“So it was just a yo-yo effect. Even when you were better, you just couldn’t pass anyone. It wasn’t that it was hard — it was impossible…. I had an inside restart at the end that cost us a top five, but other than that, we ran strong and probably should’ve ran second.”

“I guarantee if Kyle [Busch] was in fourth or fifth place behind guys with two tires, he wasn’t going to pass those guys unless they made a mistake and got off the bottom. That’s the only kind of passing that happened.”

Busch said after the race that he passed one car all day.

This race was the first at Pocono with the package new for 2019, which features taper spacers that reduce horsepower to 550 and taller rear spoilers, which produces greater downforce. The result was a race with limited passing, and numerous drivers complained about that after the race.

Hamlin said to drive with this package, “You have to temper your expectations.”

“You have to realize when you don’t have the track position, it doesn’t matter how fast your car is,” Hamlin said. “You can work on your car and make it as good as you possibly can in practice, but ultimately, unless your crew chief comes up with a great strategy or you’re able to stay up front all day like the [No. 18] did, it’s just impossible. Really, that comes from being grip limited.”

Hamlin said the racing should be much better next week at Michigan International Speedway.

“We’re going to put on probably one of the best races you’ve seen there because we’re not grip limited,” Hamlin said of Michigan. “We can run wide-open throttle or never let out of the throttle. But here at these racetracks where you have to let out of the gas, you lose way too much time in the corner to be able to make that up in the straightaway.

“We’ve got a mile straightaway [at Pocono] and we still can’t make up that deficit from what you lost from the trail car.”

Hamlin suggested two fixes to the problem: either shortening or enlarging the rear spoilers. Making the spoiler larger would give the cars more downforce and the drivers wouldn’t have to lift in the corners.

“It’s one of two things that can improve the racing, but that’s probably down the road,” Hamlin said.

This impossible-to-pass Pocono race comes after races at Kansas Speedway and Charlotte Motor Speedway that were more competitive than past years with the same package raced at the Tricky Triangle Sunday.

Hamlin thinks that instead of using this package universally, different ones should be used for different tracks.

“Every racetrack needs a different package, and ultimately, I see in the future, NASCAR limiting how much you go to the wind tunnel,” Hamlin said. “So if you have 20 packages, why do they care which ones you work on?

“Ultimately, I would love to see a Generation 7 car that has like a pod from the rear window back that, almost like an IMSA car, that this is a short track car for the back, this is an intermediate car that goes on the back and this is for a superspeedway,” Hamlin said. “It makes it so you could put on the best race possible at each given racetrack. And I think that, as drivers, that’s just what we want to do.

“Not only do we want to pass, we want to put on a good show. And when we’re faster than someone, we want to be able to overtake them and put on a show. But right now, we’re hampered by the blade that’s on the back. So you got to go one of two ways with it: more downforce, slower speeds or speed us up and take the downforce off.

“I’d say more downforce and slower speeds is probably going to be the answer to get what they’re wanting.”

Despite the disappointment in the package, Hamlin was happy about his day, as it was his first top 10 since Richmond Raceway in April.

“That’s one thing we did have is a smooth week,” Hamlin said. “We didn’t hit the wall, we didn’t blow a tire, and that’s a first in a month. So I’m absolutely happy with that.”

Because that concept is what NASCAR ran 1998-2018 and passing was harder. The low downforce high horsepower concept doesn’t work and never has.

Did NASCAR run the draft ducts at Pocono?

How about letting the crew chief and engineer coming up with some good old American ingenuity.

What a dilemma, you can’t pass or they are racing me to hard.