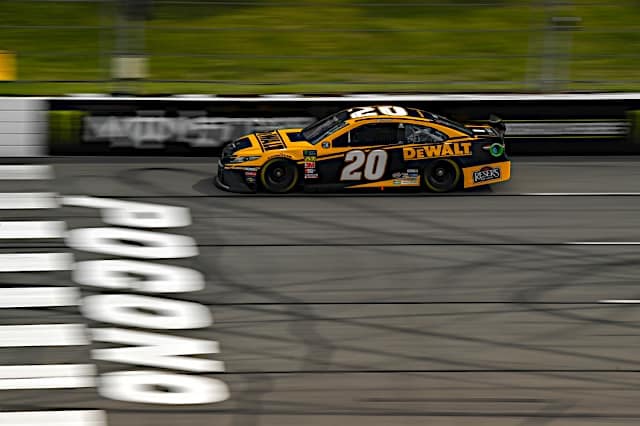 After dealing with plenty of uncertainties this season, Erik Jones put that to the side at Pocono Raceway, going out and running inside the top five most of the event. The end result tied a season-best finish of third.

Jones started the race from fourth, quickly maneuvering to second behind polesitter William Byron. But like much of the day, clean air was king and the No. 20 could never pass the No. 24 car leading up to the lap 30 competition caution.

The second stage was much of the same. With a few laps remaining, a plethora of drivers pitted, slotting Jones in 19th. But once again, the No. 20 was in good position for the final stage, where every team had to pit at least once.

Over the final 60 laps, Jones remained in the top five, taking home a third-place finish, his fourth top 10 in five races at Pocono.

“It was a good run,” Jones said after the race. “We want more. We’ve proven we can run in the top five every week if nothing goes wrong. It seems like a lot has gone wrong for us. We just need to keep doing it. We need to keep bringing these cars.”

Throughout the 400-mile race, there were only two passes for the lead outside of green flag pit stops. With the current aerodynamic package, drivers knew heading into the race that it was going to be one of the tougher tracks to pass at this season.

“It was probably the toughest I’ve had it in my Cup career,” he added. “It reminds me a lot of the Trucks here and how it was then. It was all track position. We were up there to start at the end, and I felt like we were better. Made it to the [No.] 24 and just couldn’t pass him. Then at the end, we took two tires to get track position back and nobody could really pass us.

“You look at Pocono, it’s a pretty one groove place and it was tough to get a run on anybody, on the bottom or the top. It was definitely the hardest of the year.”

Meanwhile, the third-place finish moved Jones up two positions in the championship standings to 15th, one point ahead of Kyle Larson and Jimmie Johnson. Over the weekend, the 23-year-old was asked about his contract status, mentioning it’s near an extension.

Jones believes the good runs are going to continue for the No. 20 team.

“As far as the race team goes, the adversity we’ve had to face this year has been pretty high,” Jones mentioned. “To see us keep fighting through it, I think shows a lot. I’m hoping we’re going to hit our stride here soon and throw together a lot of good weeks together in a row. As long as you bring fast cars, it’s all going to come together. If we’re running up in the top five every week, that win is going to fall, too. We’ve just got to keep going and showing we can do it.”

The series heads to Michigan International Speedway next weekend, Jones’ home track. In four Cup starts at the venue, the Byron native has a best finish of third in 2017.