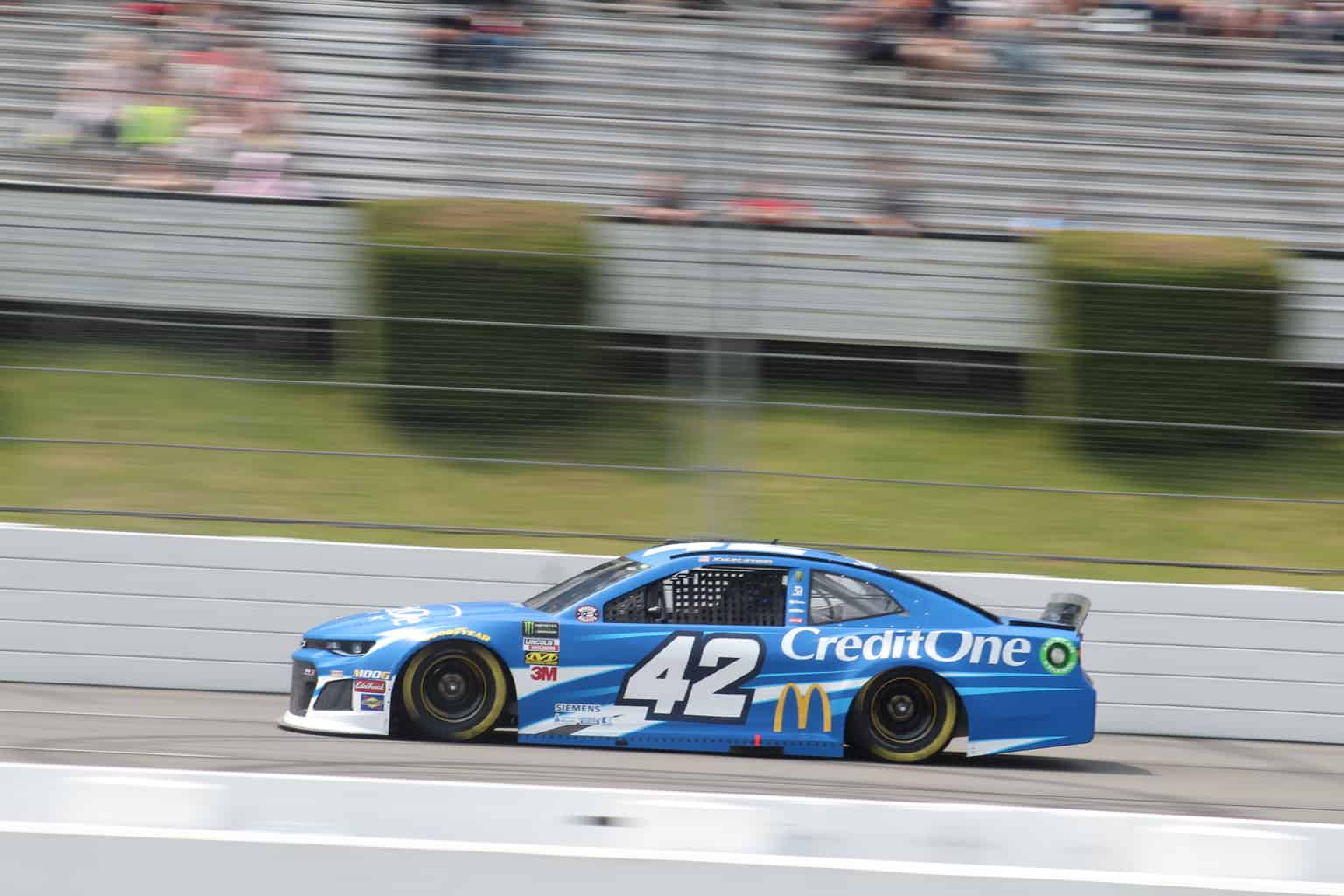 Kyle Larson swept the opening two stages in Sunday’s (June 2) Pocono 400 at Pocono Raceway, but he wasn’t in contention for the victory when the pay window opened.

Though starting seventh, Larson and crew chief Chad Johnston made a call for two tires during the lap 20 competition caution to get the No. 42 car out front. Larson went on to lead the rest of the stage, as clean air was king throughout the event.

In the second stage, Johnston called Larson to pit road after a lap 58 spin for Matt DiBenedetto. By filling the tank up, the No. 42 stretched the fuel mileage to the end of the stage, as all the drivers in front of him had to pit once more. It was Larson’s third stage victory of 2019.

Larson restarted the final stage outside the top 10. But with a good restart, going four-wide down the frontstretch, the No. 42 car was able to earn some of those positions back, and he would remain around seventh position for much of the race.

“Clean air was very important,” Larson said after the race. “I felt that the few guys behind me were faster, but as long as I didn’t miss my marks I knew they wouldn’t get by. In the third stage, I was able to pass people, get runs and pass them down the straightaways. If your car was good enough I feel like you could use that momentum to get by people at the end of the straightaway.”

Larson’s day made a turn for the worse on a restart with nine laps to go. Restarting seventh, the No. 42 dove into turn 1 in front of Clint Bowyer. Through the center of the corner, Larson was fifth. Upon exit, he was in the wall after making contact with the No. 14 Ford, having to pit to repair the damage.

“On the restart I pretty much turned myself into the wall,” he added. “I hate that I did that…. I haven’t seen a replay, but just knowing and watching my mirrors, just trying to judge the run that I was having. Also, trying to be wide open and sliding around, I just tried to fit in that hole. I haven’t seen a replay but I feel like I just pushed it a little too much there on the restart.”

Evidently, the No. 42 car took the checkered flag one lap down in 26th position. By losing out on potentially 20-plus points, Larson is now tied with Jimmie Johnson for the coveted 16th position with 12 races remaining in the regular season.

If the No. 42 team can bring speed to the track like it’s done for the past month or so, Larson has a good shot of making the postseason. Despite the lackluster finish, the driver is happy with his team’s performance, noting “my team did a really job today of maximizing strategy for the stages. I felt like I was really good in the final stage.”

The Cup Series heads to Michigan International Speedway next Sunday (June 9) where Larson has a trio of victories, the last coming in the fall 2017 race.

See the difference between Larson & Boyer. If this was reversed, Clint would be punching Kyle while he was sitting in his car undoing his belts and helmets on pit road.