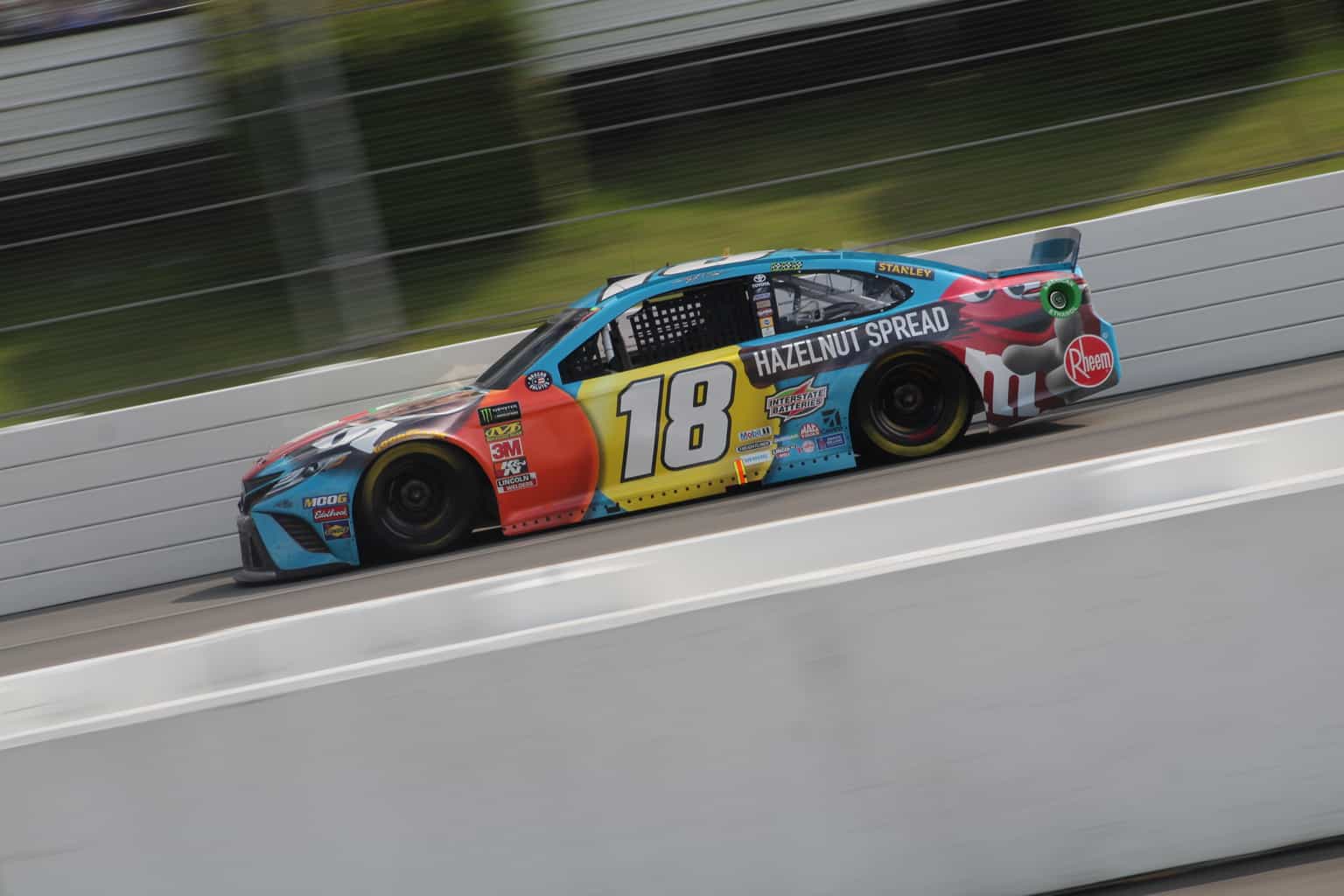 William Byron might have had the best single-lap pace all weekend, but when it came time to get down to business, Kyle Busch made sure that everyone knew who was boss. Busch led a race-high 79 laps on Sunday and pulled away after the final restart to win the Pocono 400 at Pocono Raceway. It was Busch’s fourth win of 2019 and his second in a row at Pocono. Despite that, he found the on-track action frustrating on Sunday.

“I think I passed one car today, I think that was on the outside of turn 3,” Busch said after the race. “I made a shallow entry and [Clint] Bowyer went to block, so I went to the outside. That was it. I don’t know if anybody else passed anybody on the race track for the lead like that. If so, then this package is awesome. I don’t know.”

In addition, Sunday’s win is the 55th of Busch’s Monster Energy NASCAR Cup Series career. That ties him for ninth all-time with 1989 champion Rusty Wallace.

Due to the threat of weather, the start of the race was moved up by 12 minutes to just after 2 p.m. (in order to move the start up more than that, a full day of notice is required).  Byron started from pole in his Hendrick Autoguard Chevrolet, and was able to outdistance Busch to Turn 1. From there, Byron was able to open a slight gap on the field.

Kyle Larson won the race off of pit road during the lap 20 competition caution, then proceeded to show that he had one of the best cars out there. Austin Dillon crashing on lap 29 in turn 3 brought out a caution and further scuttled the Richard Childress Racing driver’s playoff chances.

Once the green was back out, Larson was able to drive off to a comfortable lead, more than enough to win stage one. However, pit strategy ultimately determined the day. A number of drivers, including Busch, pitted before the pits closed at the end of the stage to get their service out of the way.

As a result of that move, Busch was able to claim the lead for the first time. Generally, the longer a run went on Sunday, the better Busch’s car got. Clint Bowyer was able to briefly take the lead on a restart, but Busch got the advantage back a couple laps later. Once there, Busch started putting significant distance on the field. At one point, he was four-tenths of a second per lap faster than anyone else. The only reason he didn’t win stage two was that he chose to pit prior to the end of the stage.

Busch re-assumed the lead once the drivers who chose to stay out until the end of the stage pitted. At that point, Busch acquired a rival in Kevin Harvick that could match his pace. The two drivers teamed up and opened up a small gap on the field until the final round of stops.

Here, Harvick and the Stewart-Haas Racing team gambled on two tires. That got him out of the pits first. Unfortunately, Harvick’s crew committed a tire violation when a tire got loose. That forced Harvick to perform a drive-through that dropped him out of contention. Later on, Harvick cracked the steering box in his Busch Ford and fell even further back, eventually finishing a lap down in 22nd.

With Harvick’s penalty, Busch was left with a three-second lead over teammate Erik Jones. A late caution for Ricky Stenhouse Jr. crashing in the Tunnel Turn resulted in a nine-lap dash to the finish.

Just after the restart, Larson impacted the wall exiting turn 1 after turning across Bowyer’s nose. Larson was forced to make a late pit stop for tires and repairs and would finish a lap down in 26th. Meanwhile, back at the front, Busch was able to simply drive away from the pack to take the win.

Brad Keselowski was able to get up to second on the final restart and held on to finish there. Jones ended up third, equaling his season-best finish, while Chase Elliott was fourth. Bowyer finished fifth, but was frustrated with the overall product Sunday, claiming that “wherever you came out [of the pits] was where you were.”

Next weekend, the Monster Energy NASCAR Cup Series teams will travel to Michigan International Speedway for the FireKeepers Casino 400.  The action is scheduled to begin at 2 p.m. and will air live on FOX Sports 1.

Admittedly I just watched a few laps in the middle and the last 20 laps, but think Busch and Keselowski are correct. Looked like a parade to me. Nobody passing anybody, if they were it must have been for 14th place.
Oh well, people wanted parity and now they have it.

I don’t understand why people want parity. What if every team in the NFL finished 8-8? Or MLB finished 81-81? Give me dynasties. Like New England and the Montreal Canadiens and Edmonton Oilers (I remember when!) and the New York Islanders. Not parity. Would people hate Baby Busch if a different driver won every event?