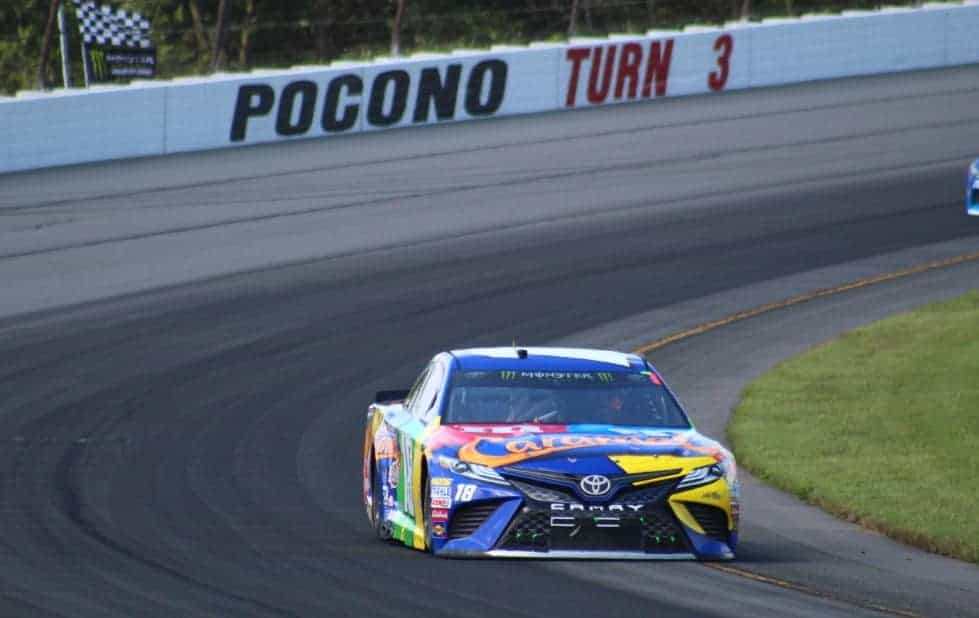 So much for positive momentum.

After a month’s worth of races that produced more action than expected, the Monster Energy NASCAR Cup Series rolled into Pocono Raceway.  This time, the race did not offer much action and will likely spark further condemnation of NASCAR’s current aero package.

The most common complaint about the high-downforce package is how difficult it can be for faster drivers to make passes.  Recent races at Richmond Raceway and Dover International Speedway signified just how much track position matters during top level races.

Then the MENCS races at Kansas Speedway and Charlotte Motor Speedway offered something different.  The new aero package seemed to respond better during cool, nighttime conditions.

Both races featured groups of comers and goers as track conditions changed, and fresh tires often made a difference.  Even the much-maligned All-Star race produced some fun moments and positive surprises.  Kansas and Charlotte suggested that NASCAR was making gains in the aero department.

Sunday’s race at Pocono, however, might want to make NASCAR’s leaders go back to the drawing board.  Any hope of another exciting race for the sanctioning body’s top division fell flat pretty quickly.  That’s a shame because a high-downforce aero package designed to increase the effects of the draft feels like it would be perfect for Pocono, with its long straightaways and high sustained speeds.  Instead, this race turned out more like Richmond and Dover.

A lap or two after each restart, the field was stagnant.

How difficult was it to gain track position?  Race winner Kyle Busch was asked how difficult it was to pass.

“I passed one guy on the outside of turn three, and that was the only guy I needed to pass, I guess,” Busch said.  The pass he was talking about was to take the lead from Clint Bowyer on lap 75, three laps into a green flag run.  Busch did not lead the rest of the race, but he only had to relinquish the top spot for short periods of time due to pit stops.  From lap 75 onward, nobody other than Busch led the race for 10 or more laps at a time.

Bowyer would eventually finish fifth.  His summation of the race?

“About wherever you came off of turn 1 (after a restart) is where you ran,” Bowyer said.

Not even differing pit strategies made much of a meaningful difference.  While race strategy is often the most interesting aspect of racing at Pocono, Sunday’s race featured no memorable gambles or contrarian strategies that greatly improved a driver’s finish.  Clean air was far more important than new tires.  That was a disappointing result, because the 2019 aero package was supposed to limit the advantage of clean air.

NASCAR certainly cannot alter the laws of physics and take away the leader’s aero advantage completely.  Yet there must be a better solution than the current package, and hopefully, the sanctioning body will find one soon, even if it comes with the Gen 7 car a few years down the road.

Meanwhile, NASCAR may also have to address some tough questions about Pocono Raceway in the near future.  In the last 10 years, the track has done its due diligence in making some significant safety improvements.  Shortening the races to 400 miles each has also been a good move for Pocono.  But there are very few races there in the Gen 6 era that have stood out as memorable or good examples of how great NASCAR can be when it’s at its best.  Unlike Kansas and Charlotte, which produced two of the best races those tracks have seen in the last decade, Pocono’s race on Sunday was one of the worst there in recent memory.

It is notable that NASCAR is trying something different for the Tricky Triangle in 2020.

Next season, Pocono will host a doubleheader weekend in late June, the first of the modern era.  The plan calls for the track to host two separate Cup Series races in the same weekend, one on Saturday and one on Sunday.  That weekend will be the only time when the series visits Pocono in 2020.  The doubleheader weekend is an interesting concept, and it is one of several schedule changes that has caught the attention of fans.

However, the schedule raises a few questions.  Why is NASCAR trying the doubleheader at Pocono, of all places?  Is this really a move to improve the racing and fan experience at Pocono specifically, or is NASCAR doing this mainly for its own sake?

For years, Pocono has hosted two Cup series races, one in early June and one in late July or early August.  There has often been only two months or a month and a half of separation between the two race dates.  At times in the 1980s and 1990s, the gap was closer to one month.

Per an agreement with all the tracks, NASCAR cannot take away any race dates from any track currently on the schedule until after 2020.  But NASCAR has also faced pressure from fans to shake up the schedule and even shorten the season.  Suffice it say that there is much less demand for two Pocono races two months apart at most.

The doubleheader weekend honestly feels like NASCAR is exploiting a loophole in its agreement with the tracks.  Because there are two races on one weekend, NASCAR is not technically taking a race away from Pocono.  However, the elimination of the second Pocono weekend gives NASCAR an opportunity to shorten the racing season while making only one trip to a track which has struggled to produce compelling racing.

In short, NASCAR has made Pocono the guinea pig for the doubleheader weekend.  The sanctioning body can use the track to test out a new format it could potentially use at other venues.  It can also shorten the schedule without sacrificing a race weekend that many fans would miss.

Some might suggest that Pocono is getting a raw deal, but the track’s recent history is not doing it any favors.  Pocono is not alone in being highly aero-sensitive, but it is difficult to justify holding two races there so close together.  The doubleheader weekend may yield something positive for Pocono, even if it is a bit exploitative.

Of course, fans should still temper their expectations.  After a week of fantastic predictions for how the new aero package would work at the Tricky Triangle, Sunday’s race was a reminder that reality is often disappointing.

I’m telling ya, Indycar is putting on a helluva show right now almost everywhere they run. The cars are working well, they have great talent and interesting personalities driving them, and they race hard. Not intending to dis NASCAR, I’m not an open wheel snob – I’ll watch almost anything with an internal combustion engine and two or more guys (or gals) trying to go faster than the others. For years NASCAR was putting on a better show than Indycar/CART were, but currently NASCAR just isn’t getting it done on the entertainment front. They have the talent, they have interesting personalities. I think the cars are the main problem.

Indycar took a step back with the current package, and it looks great and races well. I read one report where a driver stated the current Indycar reminded him of the package from 10 or so years ago – it skated around, wasn’t glued to the track. You know, the driver had to DRIVE the car. He loved it, and rightly so. The result in the racing at most tracks speaks for itself. Maybe NASCAR could take a clue from their success so we’d all have twice the amount of thrilling racing to watch/enjoy each weekend?

I totally agree with you…the Info car races are a lot more fun watch…and in person, they are a whole lot of fun. I live in Austin Texas and after a few years of having F1 here at COTA, and the huge crowds F1 draws, Indy came here. Large crowds and excellent racing made the day a lot of fun. Oh…one thing…as a disabled person…COTA treats disabled people great. Easy transportation to and from the event…special seating and help getting to the area for those of us with mobility issues.
Oh…the Xfinity race was much more enjoyable to watch…a lot more passing, and even a last lap..heck ..last turn pass to give Cole Custer a win. NASCAR is doing something right with that series.

Sixteen cautions had a lot to do with the Charlotte race getting rave reviews. It’s obvious that this year is actually no different then the past few years. The first two laps after a caution are when the passing is done and then the car’s fan out until the next caution. Also, a lot of position changes occur thru pit stops.

Every year the motto has been wait until next year. Now they’re skipping a year and saying wait until 2021. They’ve already written off 2020. I think it is fair to say the fans are growing weary of waiting.

Totally agree. It’s unfortunate, really. If they could find a way to incorporate the safety of the current car with something closer to the aero/ride height/handling package pre COT, I think both the racing and attendance would improve again.

15 minutes of my life I won’t get back! Thank goodness for Indy Car and MLB for Sunday afternoons.