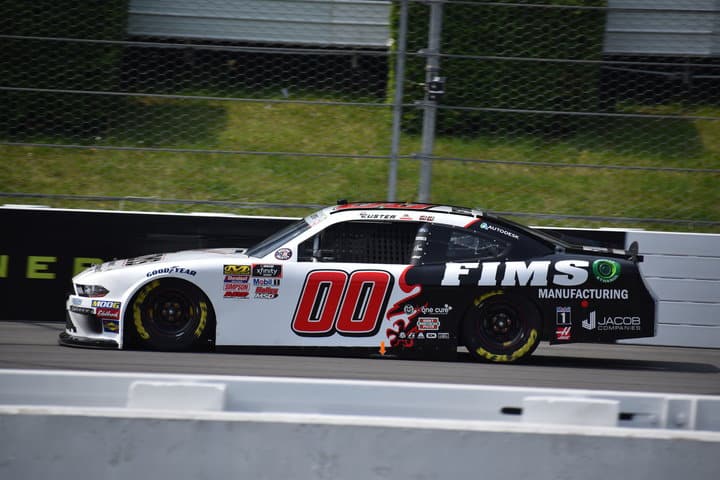 Cole Custer had the car to beat for the entire scheduled distance of the Pocono Green 250 on Saturday afternoon. And even when the race went into overtime for the first time in NASCAR Xfinity Series history at Pocono Raceway, Custer was able to snatch back a victory that appeared to have slipped through his grasp, courtesy of Tyler Reddick.

Reddick’s move to take the lead on the first lap of overtime was impressive. Custer’s determination to stick with the No. 2 after being passed and bide his time to repay the favor on the race’s final turn, even more so.

It was also a sight we hadn’t seen through the first few months of the current campaign. When Custer is good, he’s very good, as evidenced by his dominant win at Richmond and his earlier triumph in California, which saw him drive away from Kyle Busch down the stretch. On the days when the No. 00 Ford is the best car on the track, it’s usually pretty obvious, and there’s no catching it.

That was true for big chunks of this race as well, including stage one when Custer led every lap. Varying pit strategies and the circumstances that go with them conspired to shuffle him back a bit in the middle part of the day, but when everything cycled through during the final 20 laps, not only was Custer back out front, he was there with a huge lead.

Only late cautions could change that, and since there were more on Saturday than any previous Pocono Xfinity Series race, that seemed strangely appropriate. Custer held off all comers on a restart with three to go, then did the same in overtime.

It seemed unlikely that anyone would pass him, but once Reddick did, Custer deserves all the credit in the world for refusing to let go of a win that belonged to him for so long.

It didn’t end up as the race-winning pass, but Reddick’s move to the front in overtime was a thing of beauty.

To the lead on the NASCAR Overtime restart: @TylerReddick! ?

White flag is out! pic.twitter.com/HroqOZMkVa

It’s also a testament to the defending series champion and his race team that he was even in a position to battle for the win. Reddick started in the back after a transmission change, though he rocketed all the way into the top 15 in less than two laps. He finished a close second to Justin Allgaier in stage two and was in or around the top three for most of the final stage.

But disaster struck for the No. 2 Chevrolet on its final scheduled pit stop, when the team was cited for an outside tire violation. That forced Reddick to have to battle his way through the field again, aided by a gutsy call by crew chief Randall Burnett to come for left-side tires — the last tires the team had left — on the final caution of regulation.

That left Reddick with fresher rubber than some of the other drivers in contention at the end, and even though it was a bobble on the final turn that cost them a victory, it was an impressive run to get to that point.

Sometimes what’s bad can still be funny. Case in point: Michael Waltrip was in the FS1 booth with Adam Alexander and Kurt Busch on Saturday, and he was in charge of working the radio to talk to drivers between stages. Meaning to dial up the No. 7 car of stage two winner Allgaier, he instead connected with the No. 07 of Ray Black Jr. — who had the presence of mind to respond that his car was good when asked a question intended for someone else.

when you call the wrong 7 car and get #07-Ray Black Jr. instead of #7-Allgaier pic.twitter.com/xS7upk5MbH

Never one to avoid self-deprecating humor, Waltrip was a good sport about the error, and the broadcast played some amused radio banter between Black and his team after the next commercial break. It got a car that doesn’t usually get mentioned unless it’s in an incident (which it was almost was later on, ironically just missing Allgaier) some TV time, so all’s well that ends well.

Maybe someone but Mikey should handle the radio frequencies next time, though, just in case.

Speaking of Allgaier, the day he had at Pocono was kind of a microcosm of his 2019 season to date. Every time it looks like he might break through with a win, something happens and he gives back any gains he’s made.

On lap 38, Allgaier passed Christopher Bell to take a lead he wouldn’t relinquish for the rest of stage two, even with Reddick doing his best to wrestle it away before the end of lap 50. Bell beat Allgaier off pit road during the ensuing caution (and other drivers stayed out anyway), but the No. 7 was back to the point in less than 10 laps.

Then everything started to fall apart. On lap 65, Allgaier not only lost the lead but fell all the way back to fourth, with Custer, Reddick and Bell all getting by him. Allgaier stayed out longer than any of the other top contenders before making his final green-flag pit stop, but that ended up doing him no good as he slid through his pit stall and had to back up to get service, wasting precious time.

Adding insult to injury, it was Allgaier who went around in turn one to bring out the caution that forces overtime.

Crazy #XfinitySeries restart as everyone is going for it. @J_Allgaier spins to bring the #XfinitySeries caution back out with 3 laps left! pic.twitter.com/PBgrFgzRxy

It’s fortunate that he was able to avoid serious damage and come home 11th, but that’s not what Allgaier was looking for with such a strong car. He still has plenty of time to join the Big Three, Xfinity 2019 Edition, and he did enter the weekend with two straight runner-up results, but it would behoove him to finish one of these races off sooner rather than later.

Justin Haley gets the overall nod here for finishing ninth, his second top-10 performance in a row and seventh in the last eight races. Like Ryan Sieg, who recorded an uncharacteristic 26th on Saturday, Haley is running so well this season that he hardly looks the part of an underdog, but since he’s doing it for Kaulig Racing, he still qualifies here.

Kudos also go out to Brandon Brown for coming home 13th, tied with two other races (Atlanta and Dover) for his best result of 2019. It’s great to see Brown running every week, and while he’s still hunting for his first top 10, he’s certainly not been a back marker this season, with only one finish outside the top 20.

There were two Cup Series drivers who dropped in to take part in the Pocono Green 250. Ryan Preece had the better day, shaking off an apparent electrical problem in the first stage to run inside the top 10 or top five most of the day. With an off-kilter pit strategy that left him one of the last cars on fresh tires in the closing laps, it appeared he may even challenge for the victory, but he never quite got up to the front, and his fourth-place finish felt right.

The same could be said for Austin Dillon after coming home 10th. His Xfinity Series races are being run for Kaulig Racing this year, and just like Haley, his cars appear to be capable of top 10s but not much more than that.

“I was nervous once [Reddick] got by me, but he just drove it into the corner real deep and then got up the track a little bit. I just had my downshift planned right and was able to get by him.” – Cole Custer

“I just got loose in three and pretty much gave it right back to him there…. I hope the fans enjoyed it, because I didn’t, getting passed in the last corner, but that’s racing.” – Tyler Reddick

If we could get Kirk Cousins to come by and yell, “You like that?” after this race, it wouldn’t be out of place. Pocono Raceway doesn’t always offer up the most excitement, because it’s easy for cars to get strung out on the Tricky Triangle during long green flag runs.

Not so on Saturday, thanks in part to more cautions than usual bookending the race. In-between, there was enough back and forth between Custer, Reddick, Bell and Allgaier to keep things interesting, the varying race strategies that always come into play at Pocono, and the fun of seeing everyone get spread out three and four wide on restarts before scrambling to get back in shape before the tunnel turn. This wasn’t a bad day at the track by any means.

Michigan International Speedway is the next stop as it hosts the LTi Printing 250. It’s a race with a long history in the Xfinity Series dating back to 1992, when the inaugural event was won by Todd Bodine. Austin Dillon won last year’s rain-shortened edition, but assuming there aren’t many Cup Series stars in the field this time out, it’s a place where Custer could be a threat to win again after he finished third there in 2018.